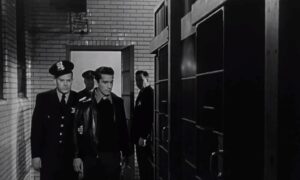 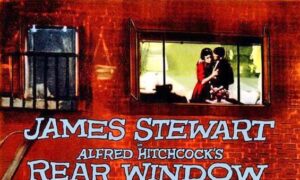 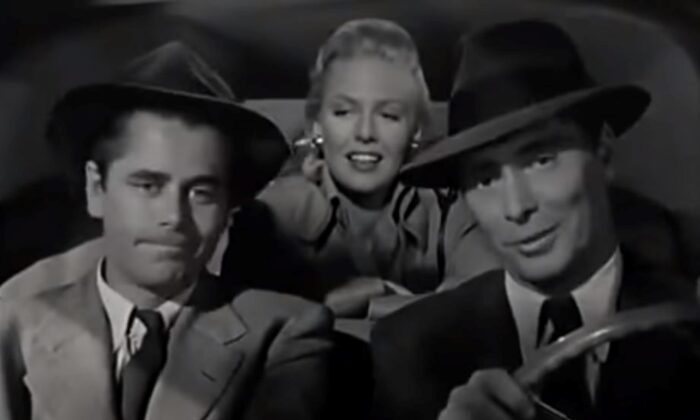 Out-of-work mining engineer Mike Lambert (Glenn Ford) is going through some hard times and things just got worse. The brakes have partially given out on the commercial truck he’s driving, and he struggles with its steering wheel and gears to keep on the winding mountain road.

He manages to steer the truck into a small California town, careening through its streets, only to end up colliding with an old pickup truck, which is parked on one of the main streets. The commercial truck’s owner shows up (Mike crashed right outside the trucking company), as does the pickup truck’s owner, a miner who demands to be compensated for the damage to his vehicle. Mike graciously pays the man out of his own wages and saunters off to a nearby bar to relieve some of his stress via a few stiff drinks.

Mike finds a stunning blonde, Paula Craig (Janis Carter), behind the bar, who seems a little out of place in the crude, small-town watering hole. Amid some heavy flirting between the two, the local police show up and promptly arrest Mike for his reckless driving, collision, and a few other charges.

During the court’s proceedings, the judge gives Mike the option of paying a $50 fine or spending 10 days in jail. Since Mike can’t afford the fine, he opts to cool his heels in the clink. Miraculously, Paula shows up and pays Mike’s fine. From there, she whisks him back to the bar, where he proceeds to get completely hammered.

Paula suddenly gives the bar notice that she’s quitting and then manages to get a very drunk Mike to a hotel room down the street. After he wakes up the next morning nursing a terrible hangover, he finds that she paid for his stay and even left him a little spending money.

Mike, suspicious of Paula’s motives and eager to get back on the right track, throws away the phone number she left for him with the front desk man. He straightens out his hat and tie and proceeds to walk over to the local assay office to look for work. There, he befriends the owner of the pickup truck he crashed into the previous day, a scraggly old codger named Jeff Cunningham (Edgar Buchanan). Jeff just so happens to be working on a hot mining prospect and, remembering Mike’s graciousness from the previous day, offers him a job. Mike immediately accepts.

There’s only one obstacle in the way—Jeff must first obtain a loan from a prominent bank in town. After having breakfast with Mike, Jeff goes to have a meeting with the bank’s vice president, Steve Price (Barry Sullivan). During their meeting, Paula calls Steve on the phone and tells him not to approve the loan. This, in turn, causes Mike’s fortune to sour since Jeff’s loan proposal doesn’t go through as planned.

Mike, back to square one, decides to look past his suspicions about Paula and shows up at her upper-middle-class home. This time, he doesn’t turn away her amorous advances and the two proceed to become romantically involved.

However, behind Mike’s back, Paula is having nocturnal meetings with Steve, which involves him picking her up on the same dark street corner every night. Mike eventually finds out about Paula’s seeming infidelities and angrily confronts her about his discovery. Paula turns the tables on Mike and assures him that she was merely trying to persuade Steve to approve Jeff’s loan so that Mike would be able to cash in on the prospecting deal.

But is Paula’s guardian angel façade genuine? Does she truly have Mike’s interests at heart, or is there a more dastardly plot afoot?

Under director Richard Wallace’s capable guidance, “Framed” is a surprisingly compact, slow-burn noir picture that gives audiences many different looks. The film starts off as more of a romantic drama than anything else, and then begins to embrace its murky noir moorings during the second and third acts. In fact, the third act delves headfirst into a full-blown tale of shifting allegiances, love and lust, double-crosses, and double-double-crosses. It also involves a … you guessed it—frame-up.

Casting-wise, Glenn Ford, a rising star at the time, plays the desperate drifter Mike Lambert perfectly. It’s always a pleasure to see flawed characters handled in unique ways, and Ford drives the film forward in his depiction of Mike as a bitter-yet-good-hearted, strung-out man trying to get his life in order.

And although I’d heard that Janis Carter possessed some considerable acting chops, seeing her in action was an incredible experience. Her character’s opaque motives and shifty countenance had enough nuance to it that I couldn’t quite place where her loyalties lie. In fact, I feel as though if I were to look up the term “femme fatale,” I wouldn’t be surprised to find the actress’s face next to the description.

“Framed” is a gripping pot-boiler of a noir flick that, once it gets its engine revving, never lets up on the gas. It contains some plot twists I honestly didn’t see coming, as well as some interesting character studies by its more-than-capable cast.