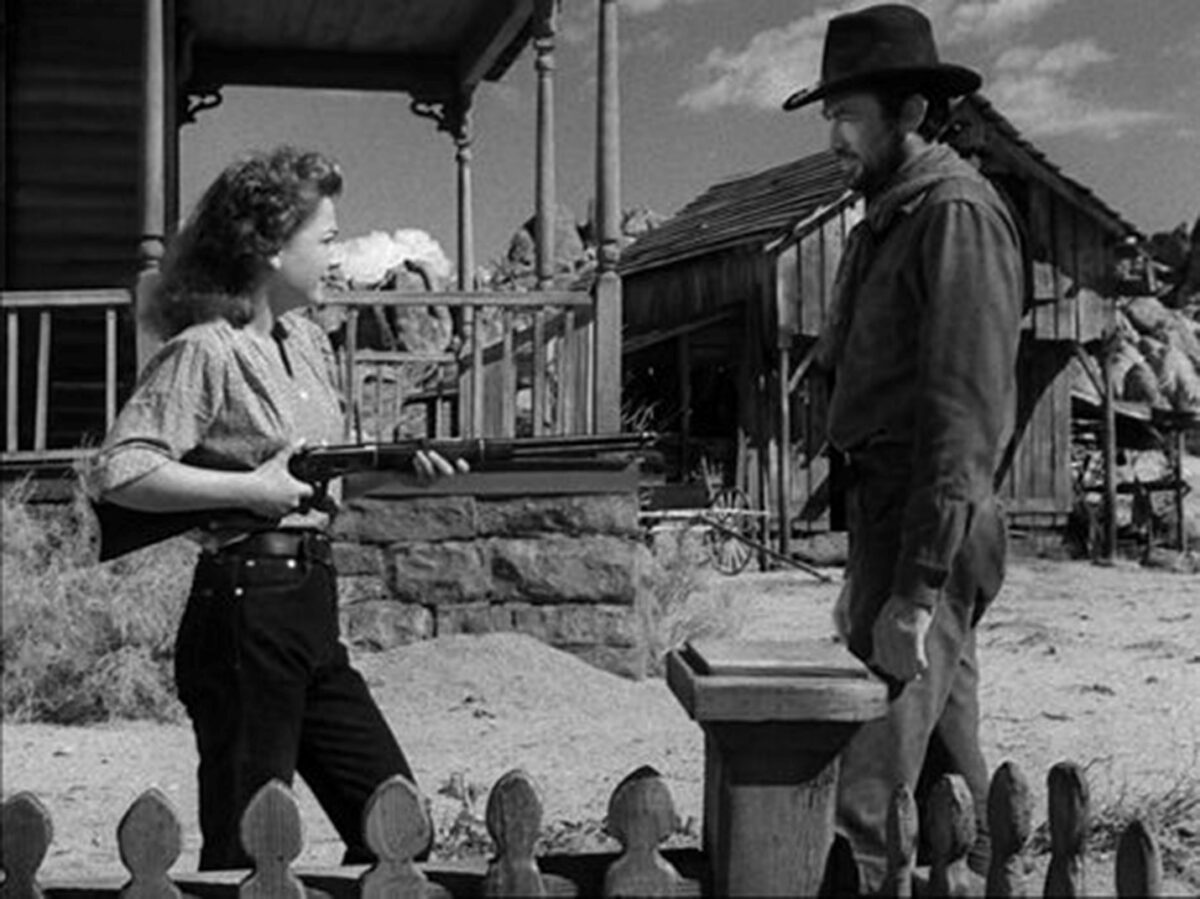 I’ve seen a number of outstanding Westerns starring Gregory Peck, with “The Gunfighter” (1950)  and “The Big Country” (1958) being counted among my personal favorites. However, a lesser-known film titled “Yellow Sky” (1948) is perhaps the most unconventional: a hodgepodge of seemingly incongruous elements that, under the guidance of a lesser director, could have fallen apart at its seams.

Yet under the brilliant direction of Oscar-winner William A. Wellman (“A Star Is Born,” “The Ox-Bow Incident”), everything coalesces into a beautiful tapestry of drama, high tension, sultry romance, and action-packed shootouts.

After relieving the local bank of its funds, the outlaws ride out of town with Jed taking up the rear to be on the lookout for any lawmen or soldiers on their tails. It doesn’t take long for a large group of Army cavalrymen to appear on the horizon in hot pursuit. It also doesn’t take long for Jed’s body to get perforated by the soldiers’ bullets, allowing the other six bandits to get a good lead on their pursuers.

But when they find themselves at the edge of the parched salt flats of Death Valley, in Eastern California, they face a serious dilemma. Should they turn back and risk running into the soldiers or attempt to traverse the 70 or so miles of sun-baked desert to reach the other side, and do so with the little water they have stored in their canteens?

While Stretch decides to ride out into the desert, Dude, constantly jockeying for leadership of the gang, wants to turn back. As the others depart one by one to follow Stretch out into the foreboding expanse of scorching dust and salt, Dude stubbornly falls in line behind them.

The outlaws almost perish in the heat before stumbling upon a small town nestled in some nearby foothills. At first, Stretch thinks he’s seeing a mirage and wipes his weary eyes to make sure that what he’s seeing is real. But the town is real—only not offering what they think it represents. “Water,” the men take turns croaking from their cracked, puffy lips.

Their hopes of finding an immediate water source are dashed when they shuffle into town and find out it’s long been abandoned. A large, crooked sign reading “Yellow Sky” is posted above the doors of the ghost town’s Main Street saloon.

However, just as the men are about to give up the ghost, hope appears in the form of Constance “Mike” Mae, a rugged tomboy who was raised by local Apaches. She senses that the men probably have less-than-stellar ratings when it comes to morals, so she has her rifle constantly in their faces. But as an innately merciful soul, she does guide them to a nearby spring on the outskirts of town.

After the men quench their thirsts, Stretch decides to linger around for a bit, having been smitten by the rough-and-tumble lassie. The other men ogle her, especially Lengthy.

It isn’t long before the band of bandits uncovers what Mike is doing out in the desert all alone with only her grandpa (James Barton) keeping her company. The two are running a clandestine mining operation in the nearby hills and have already secured around $50,000 in gold. Suddenly, things become a lot more complicated.

Tension develops between the pair of prospectors and the gang. Although a budding romance also begins between Stretch and tomboy Mike, Dude remains single-minded in his desire for the gold—all of it. As tensions rise and fits of anger erupt, loyalties shift and double-crosses ensue. There are so many twists and turns throughout the second and third acts of the movie that you never quite know who’s going to get filled with hot lead.

But amid all of this tumult, Stretch begins to turn away from his bad-boy ways and eventually emerges as a changed man. But can he do so before getting bushwhacked by one of his men? And then there’s that roving band of Apaches that presents an existential threat.

Likewise, the performances by the film’s outstanding cast—particularly Peck, Baxter, and Widmark—are gritty and realistic. As in “The Gunfighter,” Peck plays a conflicted character running from a shady past. But here, we see the gradual transition from a bad guy with a conflicted consciousness to a good guy who eventually redeems himself.

“Yellow Sky” represents one of the first cinematic glimpses of what Westerns eventually evolved into in the early 1950s. Instead of straight-ahead dramas with uncomplicated good guys and bad guys, we see a more nuanced film with complex characters. There are also some good moral messages to be gleaned, which eventually culminate into a satisfyingly feel-good ending that lightens up the relatively grim subject matter.