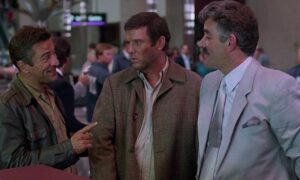 I saw “Thelma & Louise,” Ridley Scott’s paean to feminism in 1991 with an acting school ex-classmate. I observed the drug-like effect that one of the film’s minor characters was having on her, and I made a note to keep an eye on the career of a young actor whose golden hair and ripped abs were only part of his already formidable X-factor. You can always spot a star being born, like Scarlett Johansson in “Ghost World,” Jack Black in “Bob Roberts,” and Tim Robbins in “Bull Durham.”

Though I myself didn’t bliss out over the then unknown Brad Pitt in like fashion, director Scott’s panoramic, drop-dead-gorgeous lensing of Utah and Arizona’s red-rock mesas, buttes, otherworldly desert dreamscapes, and the glorious highways that bisect them are like potent drugs to bikers.

Like “Easy Rider” before it, I immediately needed to own this movie. I owned it on VHS, then DVD, had the soundtrack on my iPod, still own it, and still want to carve those red-rock canyons on two wheels, with a couple of extra gas cans strapped to my Harley.

That said, and despite the fact that it was a zeitgeist film with a powerful influence that’s long since entered the American cultural lexicon, I’ve realized a few things about “Thelma & Louise.” I think feminism wins the fight here. But it’s not at all a fair fight.

They don’t know much about fishing. Louise packs her entire wardrobe, and Thelma drops the snub-nose revolver gifted by her husband, daintily, via thumb and forefinger, into her luggage as an afterthought.

Off they go in Louise’s faded turquoise 1966 Thunderbird convertible, leaving sleepy Arkansas quickly fading in the rearview mirror, and we find ourselves (mostly due to McDonald’s hilarious shenanigans) well-primed for a screwball road-buddy comedy.

Our girls make a pit stop, decide to throw back a couple of margaritas and Cuervo shots, do a little boot-scootin’ to the rousing country band, and here comes sweet-talking local predator Harlan (Timothy Carhart), who before long is slapping around and attempting to rape Thelma up against a car in the parking lot. Suddenly, it’s not funny anymore.

Louise to the rescue with Thelma’s handgun; however, Harlan’s so insufferably, sneeringly unapologetic that Louise caves in to her omnipresent PTSD (due to her own similar past experience) and blasts Harlan to kingdom come. Should have blown out his knee instead, but she nails him square in the heart. A crime of pure passion, it is. And how can we not cheer a little bit?

Our heroines hit the road, headed for Mexico, across the Oklahoma flatlands and into the Chihuahuan high desert of southeastern Arizona (all of which looks incredibly romantic when seen from a classic T-bird).

What began as a weekend romp segues into a wild (and Wild Turkey-fueled) transformative odyssey, with hellhounds (of law enforcement) on their trail. Theirs is a tragically snowballing metaphorical acid trip, a shadow rite of passage: liberation, maturation, and empowerment begat by a fateful descent into criminality.

There are signposts and further pit stops along the way, and all of them are various forms of despicable men. One such Pitt-stop is a cowboy-hatted, hitchhiking, hayseed-hottie juvenile delinquent (conveniently named J.D.), who romances naïve Thelma till she’s cross-eyed, teaches her how to rob a convenience store, and then robs her blind.

Then there’s the redneck “suicide jockey” (fuel-tank trucker played by Marco St. John) whom they pass and re-pass out on the highway. When he refuses to curb his disgusting catcalls and obscene gesticulations, they seduce him off the road and, using their “Learned-it-off-the-TV!” firearm skills, flatten his tires and blow his 18-wheeler sky-high. Isn’t that fun? What’s even more fun is that director Scott didn’t tell actor Marco St. John that the rig was going to actually blow—the ensuing reaction is priceless.

Who else is nasty? The nazi highway patrolman (Jason Beghe) who pulls them over for speeding. Normally nice Thelma, her latent talent for commandeering dicey situations via cop-speak blossoming forth from her like unto Pallas Athena springing from the brow of Zeus, orders him into his patrol-car trunk. “Blam!!” “Why’d you shoot the car?” “Air holes.” Annnd the nazi cop starts bawling like a baby. Isn’t that fun?

What’s even more fun is the MTV-like follow-up scene, where a weed-addled Rastafarian bicyclist (Noel L. Walcott) in full race-sponsored spandex regalia, water bottle and giant spliff in hand, blows marijuana smoke into that selfsame air hole because he fancies in his blissed-out stupor that he hears a disembodied voice coming out of it.

So that’s Darryl, Jimmy, Harlan, J.D., the dirty trucker, and the nazi cop, whose despicable-ness all conveniently contribute to the outlaw desperation, moral demise, and eventual martyrdom of two lovely ladies.

Combine that with the scenic road trip and binge drinking, which allow Thelma and Louise to feel liberated and alive as never before. Stir in the fact that they get to blow away bad guys and be alpha-dominant. It all presents as a veritable scorecard of various high-five-able comeuppances to delight females and feminists everywhere. All of which somehow conspires to make this feel like quite a legit state of affairs—this business of two perfectly normal women robbing stores, shooting guns, blowing stuff up, and driving off cliffs. Susan Sarandon and Geena Davis both earned Oscar nominations.

What Do Women Want?

That’s the classic question mark that sits above every man’s head. Does feminist action-fantasy “Thelma & Louise” answer it? This stylized, half-comic, half-tragic saga of desperado heroines on the lam begins realistically, goes all anarcho, outlaw-biker-gonzo, swipes the ending off “Butch Cassidy,” and then pretends to the throne of late ’60s, early ’70s feminism by facilely laying the blame at the feet of six bad men.

And Jimmy’s not really a bad guy. Neither is the cop—he’s just a family man doing his job (maybe he poses a little bit). So, four toxic males. Actually, Darryl and J.D. are not exactly toxic but more resoundingly “ugh” and “meh”—you can see, deep down, that J.D.’s actually a misguided kid with a good heart. So two truly toxic males.

Why is it, I wonder, that women from all walks of life are going on the all-female “Woman Within” Weekends, the female counterpart to the all-male New Warrior Training Adventure, which likewise mines, in mytho-poetic fashion, tribal life for clues and revived understandings about how the roles of the feminine and masculine are meant, by tradition (and therefore prescribed by the gods), to be played? Why is it that dyed-in-the-wool feminists and very butch, sworn man-haters are coming out of there embracing the traditional notions that females should be feminine and serve their families?

Ancient wisdom says yang is the light and yin is the darkness; yang is order and yin is chaos, yang is white and yin is black, yang is good and yin is evil. Both are needed to create everything in the cosmos. But darkness and chaos attributed to women … seems unfair. Do men get all the good stuff?

It all makes sense if viewed from a particular perspective that says the primordial, original souls of human beings switch off and alternately incarnate physically, first as male, then as female, and then back again. We switch back and forth—and so fairness and balance is created over the long run. How about that? Kinda gets you thinking.

But, regardless of its feminist stacked deck, “Thelma & Louise” is still one of the most fun movies you’ll ever see.