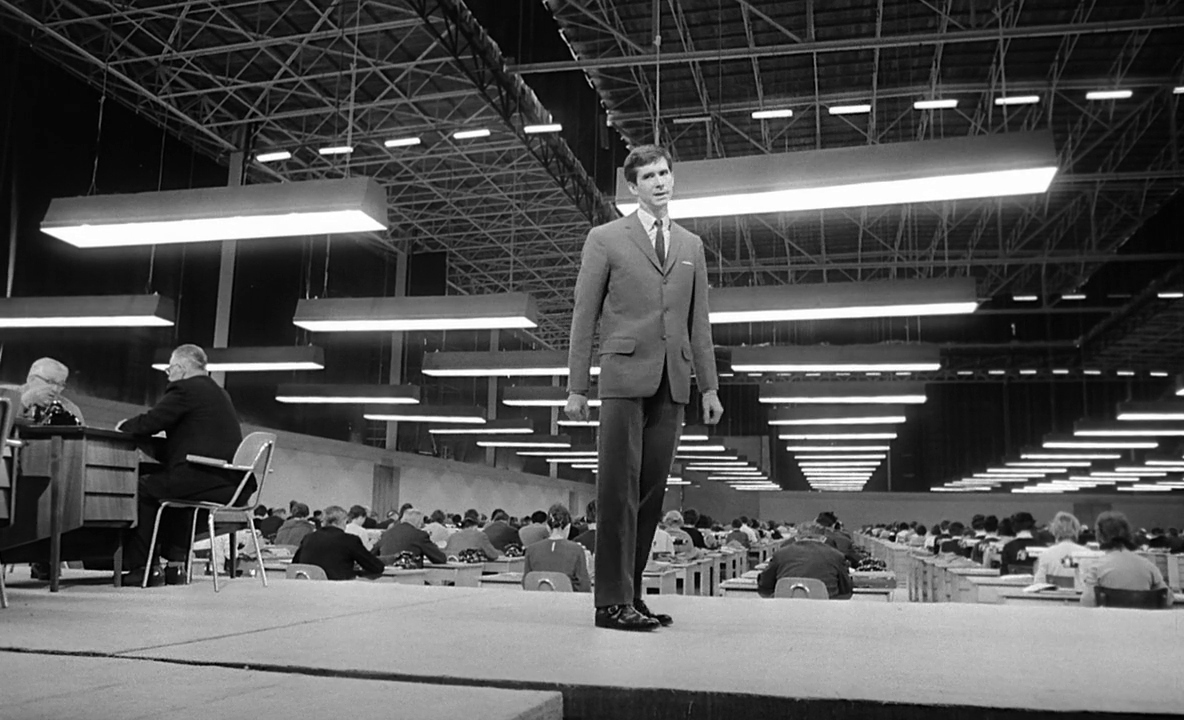 Antony Perkins as K in his hangar-sized office that houses hundreds of workers, ant-like, plugging away at thunderous typewriters or telephones in a scene from "The Trial." (Courtesy of Rialto Pictures/Studiocanal)
Film & TV

Orson Welles’s formidable baritone introduces his masterpiece, “The Trial” (1962), with a parable.

A man shows up at the seemingly beckoning doorway of The Law. A guard stops him and warns that each new threshold of the edifice is more zealously guarded than the first. The man slumps down to wait there and ends up waiting for years. As he ages, loses his strength, and lies dying, he is dimly reminded that the law ought to be accessible to everyone.

The film’s protagonist, Josef K. (Anthony Perkins), represents an anonymous citizen, or more simply, a struggling soul. Other characters heighten his sense of anonymity by calling him Mr. K, or just K.

The action begins with detectives barging into K’s room, announcing his arrest. We never learn what they charge him with, yet K offers them his ID, answers their questions, and follows their orders. They meet his rush of questions, not with answers, but with more questions. Shocked, he also finds his office colleagues and “law-abiding” witnesses seem to be helping with his arrest, supposedly helping an unprejudiced investigation.

Everything seems biased against K as he plunges into a dizzying maze, harassed by friends, relatives, police, lawyers, court officials. He rails against the invasion of his privacy and the violation of his rights. He wails about shared guilt or innocence; surely, everyone’s innocent or guilty of “something.” His protests are in vain.

Watching the futile push-pull nature of his quest, you can’t help wondering which bits of his fate are causes, and which are consequences.

The So-Called ‘Rule of Law’

Welles, who wrote the script, offers a clue; the word “law” appears nearly 30 times, the word “justice” only five. The point of a system of law isn’t justice, it’s a bureaucratic system designed to sustain itself and its processes, even at the expense of fairness and justice.

The story and its bizarre twists aren’t anywhere near as important as the stifling style in which it’s told. You feel like you’re drifting between sleep one moment and waking the next, unsure whether you’re in an amusement park in real-life or merely unable to stir yourself from an unending nightmare. This going back and forth like a yo-yo between “work” and “play,” as it were, makes the film gripping: At times, it seems scarcely believable, yet eerily true at others, but never not disturbing.

Over the film’s run-time of two hours, K runs the gamut of emotions that a “typical” or “innocent” citizen feels over two years (or 20), coping with an intrusive institution or an overbearing state. His mental state? It swings wildly, from curious to apologetic, from submissive-defensive to rebellious, from bullying to passive. One moment he’s weak, cautious, the next moment strong, reckless. In the morning he’s furious, at noon he’s desperate, but by night, he’s indifferent, even laughingly resigned.

K is more trusting and more transparent about himself and with others than most people are. His low self-esteem allows him to take on guilt (and blame) for things he’s not done, words he’s not uttered, thoughts he’s not thought, and feelings he’s not felt.

Filmmaking at Its Best

Welles amplified a sense of feeling besieged through unbroken shots or long-takes. You feel you’re eavesdropping on real, sensitive conversations. Welles’s camera hugged K and those who are silent witness to his besiegement or noisily party to it. Screen angles sharpened the claustrophobia, so you imagine that some rooms are too small, some ceilings too low, some floors too high, some corridors too narrow.

Sometimes Welles went the other way: He magnified the set several-fold. At one of K’s “trials,” the contempt of the authorities toward K and the audience’s laughter at K’s speech are not just loud, but deafening. Some doors are nearly 20 feet tall. K’s hangar-sized office houses hundreds of workers, ant-like, plugging away at thunderous typewriters or telephones.

Welles, who also plays the advocate Albert Hastler whom K consults, dares us to ask: Is the hope of justice better than justice itself? Is there something endearing in long-suffering waiting for justice? What of those who are content to file petition after petition, pay bill after bill, make court appearance after court appearance, submit one piece of evidence after another, cajole one witness after another to testify, all in the hope of “victory”?

K’s rebuke to Hastler suggests that such a deathly wait for justice is actually “defeat.”

Perkins is brilliant, walking and talking in jerks, vertiginously clasping walls as he staggers from corridor to corridor, craning his neck conspiratorially one minute, staring confoundedly the next. He manipulates the pitch of his voice to mirror his state of mind: high when talking to someone else, low when talking to himself.

He wields every part of his body, especially his pencil-long fingers like that of a frenzied spider, spinning an imaginary web, or clenching and unclenching themselves in a fever of neurosis.

The ridiculously broad-shouldered Perkins stood about 6 feet 2 inches tall. Yet, as the increasingly suffocated K, he might as well be a midget behaviorally, psychologically, morally, emotionally, and even spiritually.

His creepy portrayal of Norman Bates in “Psycho” (1960) made Perkins a star. Yet, it’s his unsung turn as the pitiful Joseph K in “The Trial” that exhibits the sheer expanse of his dramatic range. Sadly, it’s a range that Hollywood barely explored and didn’t celebrate nearly enough.

Welles’s screenplay was adapted from Franz Kakfa’s novel of the same name; Welles also directed what he later called his best film. You be the judge.