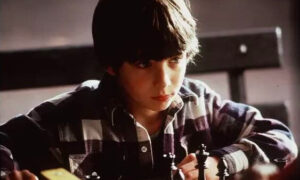 Rewind, Review, and Re-Rate: ‘Dead Poets Society’: How It Contributed to Society’s Downfall

Remembering it as very inspiring in 1989, I originally thought this would be a “Popcorn and Inspiration” treatment, but upon rewinding and reviewing, I feel a need to re-rate it. In 2021, I see it as the poster child (or movie poster) for the insidious, creeping way that Hollywood snuck communism, Trojan-horse-wise, into America via the movies.

And what’s scary is that it probably wasn’t intentional on director Peter Weir’s part. The decaying of traditional ethics that lies at the heart of communism’s disintegration of America’s moral foundation had already been revealed to be at an advanced state 20 years before, at Woodstock ’69. “Dead Poets Society” didn’t have to fly below America’s communism-alert radar, because the radar had long been defunct. The movie was received as right, true, and just so; the gold standard for “teaching our children well,” to swipe a Crosby, Stills, Nash, and Young lyric.

John Keating (Robin Williams), the new poetry teacher at the prestigious Welton Academy prep school for boys, doesn’t do boring lectures with pseudoscientific rules that say what poetry is and is not. No sir. He’s more of a charismatic camp counselor, emboldening his students to literally deface their textbooks and rip out the introduction that offers a “scientific” graph by which the merit of a poem can be “tested” and “proven.”

He rants, he raves, he stands on his desk, he calls “gather ’round ye good lads” huddles, and kneels down in the middle, offering pithy, sotto voce Walt Whitman-sprinkled poetry, nay, life lessons.

The time is 1959. Keating has the class look at the venerable photos of the school’s students from the 1800s, 1910s and ’20s, noting that they’ve all got that same youthful “carpe diem” gleam in their eyes as the current crop of boys, but those alums are now pushing up daisies. Soon he’s got the previously snickering boys addressing him as “O captain, my captain.” Which is, truth be told, rather wonderful. Boys, especially boys today, need a good male role model with gumption, after all. Which is part of why it’s difficult to recognize what’s actually going on here.

“Carpe diem” is the main lesson of the movie: “seize the day,” and we get rousing examples of how the concept inspires the boys. One student, Knox Overstreet (Josh Charles), takes off on his bicycle down a sloping field into the middle of a massive flock of geese, causing an exhilarating explosion of goose-flapping and honking. Two science enthusiasts rig a proto-radio and blast music all over campus. That’s fun, of course. The boys couldn’t have anticipated the de rigeur “stereo wars” of 1970s college quads, where, say, the weed-addled Deadhead student with the most powerful speakers won.

What else? That same Knox, an average fellow, is smitten with the alpha female girlfriend of that time-honored prep school king of alphas—the football quarterback. Knox knows he’s “punching above his weight,” as they say, but Mr. Keating has armed him with “carpe diem” courage. And so he pursues his love, getting off easy with a bloody nose. Is that not valiant?

John Houseman, one time head of the Juilliard acting conservatory said of Robin Williams (who attended Juilliard) that he wasn’t really a dramatic actor but a standup comedian. And while that may be true, Williams’s performance in “Dead Poets Society” is as good as his dramatic acting got, in addition to “Good Will Hunting.”

“Dead Poets Society” was Ethan Hawke’s breakout film. (Robin Williams got Hawke an agent, he was so impressed with his work.) Hawke was a revelation as a terminally shy boy whose cage Keating rattles, to the point where the kid discovers his public-speaking voice, shocking himself silly, to everyone’s delight. If you want to see what having a wide range in acting means, watch Ethan Hawke in “Dead Poet’s Society” and then “Training Day.”

Robert Sean Leonard plays Neil Perry, a boy perennially intimidated and shamed by his overbearing, upwardly mobile father (Kurtwood Smith). Inspired by Keating’s “carpe diem” philosophy, Neil revives the secret poetry-reading club that Keating had founded during his own time as a student at Welton. Neil also flies in the face of his father’s insistence that he go to med school, and plays Puck in a local production of “A Midsummer Night’s Dream,” with disastrous repercussions.

“Dead Poets Society” would at first appear to be about literature’s potential to be liberating, celebratory, and life-affirming. All these “downtrodden,” “persecuted” (and upper-class) boys appear to be doomed to have the life drained out of them by family patriarchs in cahoots with the academy’s patriarchal instructors. And then here comes Keating, and life is suddenly passionate and promising. That’s good, right?

Yet, the time-bound progression of all things and all processes in the universe follows the law of growth and decay. The moral foundation of early phases of societies supports laws governing the greatest good, for the greatest number.

Such ethical modalities tend to be labeled as conservative today. Then along came Karl Marx, a self-avowed Satanist, who shrieked about oppression and sowed jealousy via the concept of class struggle, and … wait a minute … I don’t have time for a treatise on communism here in a movie review. Suffice it to say, the main point of “Dead Poets Society” is to incite students to break the traditions, break the laws, and cherish above all else—themselves. Sounds awesome by today’s standards, but this is, in fact, ground zero for when societies begin their decline into decay.

The stabilized, early phases of societies are always about human lives focusing on contributing to the greater good of the tribe. Rebellion against good old church-going tradition starts the slippery slope to our current no-morality, no-truth state of crystal meth, plastic-infested oceans, Jeffrey Epstein, the MS-13 gang, the Sinaloa cartel, child pornography, Americans left behind in Afghanistan, and everything that can be found on a certain American president’s son’s laptop.

Then there’s the example of Neil Perry, the kid who wants to be an actor. His uptight dad says no way; you’re going, by hook or by crook, to be a doctor, and we’re pulling you out of Welton and sending you to military school for lying to me and being in a play. How does the kid deal with this? If you won’t let me be an actor, I’ll shoot myself in the head with your gun, dad. That’s hardly an inspiring message for the PG crowd of kids who were the target audience for this film.

Communism espouses that everyone is equal, which has led to the current misleading mentality of “everyone should get a trophy.” Soviet communists legislated that any old nasty geezer could have sex with any beautiful young girl, for example. In reality, billionaire alphas and NFL quarterbacks get alpha female trophy wives. People are not actually created equal. Life is not fair. Having courage to go after what one wants is good, but in real life, Knox Overstreet does not get that girl.

“Dead Poets Society” didn’t help matters, but the cat had already long been out of the bag. How are we going to put the genie back in the bottle? At the Bergen County Harley-Davidson dealership recently there was a woman named Trish in the parking lot, giving up her Labor Day weekend to take names for a petition to ensure that our freedoms (regarding vaccinations) don’t get eroded more than they already have been. What would we call that? Carpe Diem.