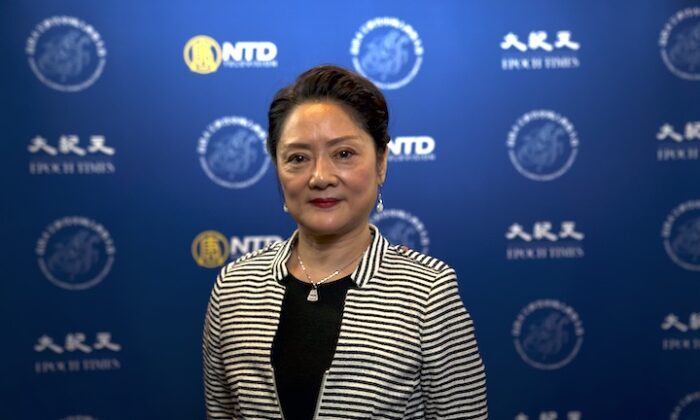 In the past dozen years classical Chinese dance has burst onto the world stage and drawn intrigue and appreciation from global audiences. The revival of this traditional art form is a departure from the modern China under communist rule that most people know, and the truth about China’s heritage continues to move audiences and motivate these dancers who pursue the art.

The NTD International Classical Chinese Dance, now in its ninth year, took place Sept. 2–5 in New York, and this year’s requirements have raised the bar on the ancient art form.

Competition judges Minghui and Gu Yun explained the meaning of “shen dai shou,” a method of movement where the “body leads the arms,” and why it has become the new standard for classical Chinese dance.

“Actually in martial arts, in opera, in other art forms that developed alongside Chinese dance, they all mention ‘shen dai shou,'” said judge Gu Yun, who is an alumni of the Beijing Dance Academy and whose credits include choreographer at the world renowned Shen Yun Performing Arts. Schools all over China talk about this method too, he said, but thus far, no one knows how to teach it.

This is because the method is an ancient one, and Chinese dance was passed down in a master-to-apprentice format throughout the thousands of years of Chinese civilization, Gu Yun explained. Little was written down, much gets lost through word of mouth, and an apprentice watching and trying to imitate their master may not understand all the internal intricacies of which muscles to use. The death blow, of course, came when communists took power in China, and destroyed the Chinese people’s connection to their cultural heritage.

“‘Shen dai shou’ is a big part of the score this time, it’s become the standard,” said Minghui. When a dancer really uses their body to dance, the exertion of force begins from the center of their body, that place below the collarbones, right over the heart. It draws attention to the mind-body-spirit connection so prevalent in traditional Chinese culture, and pairs nicely with another saying commonly used in classical Chinese dance: “Dance from the heart.”

“If you really use the body to dance, from the heart, here, to move your body and four limbs, then you characters are more vivid,” judge Minghui said. “We say dance is a body language; we use our bodies to tell stories, to depict characters. So just to understand it simply, if you’re not using your body when you dance, you’re not speaking this language fully and clearly. This is a fundamental thing.”

She elaborated on the importance of the heart: “When you dance, you need a lot of artistry, not just dance technique, in order to dance. And there are many things that go into the development of one’s artistry, from musicality to the development of your aesthetic sense, culture, your understanding of what it means to be a human. So, when you dance, it is an expression of all of these things, as you bring a character to life.”

“Dance also begins from your mind, and from your heart, not just your arms and legs and movement,” she said. “There’s a lot of intangible and invisible aspects at play here too—energy, spirit, and all of these things that some people can find hard to explain.”

If dance is body language, Gu Yun elaborated on how the “shen dai shou” method changes the way a dancer “speaks.”

“The use of this gives you a fuller language, more nuance, and, of course, a better stage effect for the viewer,” Gu Yun said. There is a stark difference between watching a dancer who uses this method and one who isn’t, and one does not need to be an expert in dance to feel the difference. Despite both dancers using the same movements, the way the movements look and the way the dancer connects the movements becomes completely different when their philosophy of movement has changed, the judge explained. The dancers who have pioneered this method are those from Shen Yun Performing Arts and its dance academy, Fei Tian, as Shen Yun Artistic Director D.F. is the one who has selected and organized the method into their training system—and the way they communicate is very different from dancers of other schools.

Gu Yun, who grew up in China, an atheist nation under communist rule, firmly believes spirituality is a defining factor in art.

He spoke about why “shen dai shou” is a method only utilized by Shen Yun and Fei Tian dancers: First, only their artistic director has taught it so comprehensively. But secondly, and crucially, an atheist culture is materialistic, said Gu Yun, and unable to achieve a profound effect.

For instance, Beijing Dance Academy has its pick of the best dancers from an entire nation, from thousands of well-trained applicants, but their dance groups haven’t made a fraction of the impact Shen Yun has on the art world. “Modern China is atheistic, so you’re immersed in this culture from childhood, and maybe you can’t tell the impact of it at first, but your entire outlook on life is about the material, your goals are material, a good job, house, living conditions.”

“With faith, everything becomes pure, and life can be purpose-filled,” Gu Yun said. “And only then does life have meaning. We’re dancers here, but it doesn’t matter if you’re a dancer or an accountant or what your profession is, you want to have reason and meaning for doing what you do.”

The pursuit of an artist must be pure, Gu Yun said, and Shen Yun and Fei Tian’s culture allows for that. To learn “shen dai shou” requires a pure heart too.

“First, your motive for pursuing art needs to be pure, because only then are you open to inspiration, and intuition,” Gu Yun said. “You have to remember, it’s not a science, it’s a combination and layering of feelings and the intangible and unmeasurable. There isn’t a cut and dry beginner-level ‘shen dai shou,’ intermediate, advanced level.”

The judges spoke well of this year’s contestants, remarking especially at the improvement of the junior division dancers.

“You can see their heard work and determination. There’s more depth in their stories this year, and the effect is better and there are some moments you’re really impressed with the artistry,” Gu Yun said. Those in the junior division are sometimes dancers of 16 or 17 years of age, but many chose hefty characters from the canon of Chinese literature and history, characters one might not expect students so young to be able to fully grasp.

Minghui encouraged the dancers to keep working hard. “We saw a lot of good potential, and I heard some of them are even very new dancers, and they’ve grasped so much in just a short time,” she said. “This is a rare opportunity to see traditional Chinese culture, and this art is a special part of our culture.”