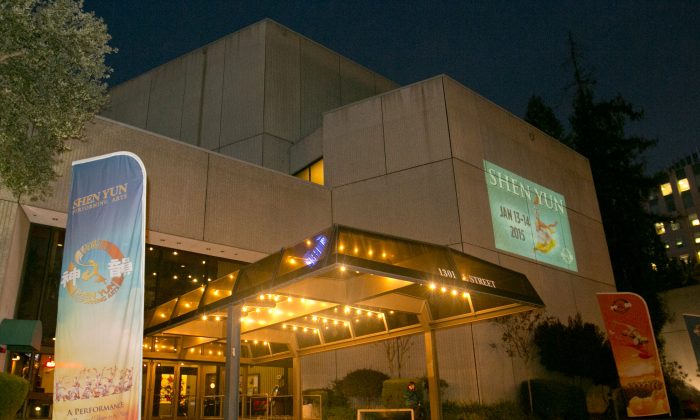 SACRAMENTO—Performances in the world today that elicit feelings of hopefulness and enlightenment are few and far between, but Shen Yun did just that for Michael Anderson, retired owner of a Bay Area real estate firm, during its Tuesday night performance in Sacramento.

“I have hope. Yeah, that’s good. I need hope,” said Mr. Anderson, “Very excellent, it picked me up. It is a bright light in the world.”

“It’s a bright light to destroy the darkness in the world,” he reiterated solemnly.

Sitting in the grand auditorium, the energy emitted from the stage was electrifying. Some audience members were wiping away tears as the curtain fell. Some still had their eyes transfixed on the stage, wishing for more.

Mr. Anderson’s wife, Lina Anderson, was one of those inspired by the performance.

Shen Yun performances merge seamlessly history, culture, dance and music with profound ideals involving humanity, divinity, and salvation. From the heartfelt movements of each dancer to the stirring vocals of the soprano soloists, each element coalesces to create transcendental experiences for audiences.

The theme of good overcoming darkness and good deeds begetting good returns resonated with Mrs. Anderson. She was touched by the dance piece The Power of Compassion, showing a young man being compassionate to an attacker.

“[The dancers] are portraying the feeling of good hope and good wishes for others, and I thought it was quite well done,” said Mrs. Anderson. “You try to hit them with the arrow of kindness and hope infects them.”

“They showed that they had the best [kind of] fight, [which] is to do some kindness,” added Mr. Anderson.

The piece illustrates incidents of violent repression still taking place today in China. In 1999, the Chinese Communist Party (CCP) initiated a persecution campaign against Falun Dafa, a meditation discipline based on the principles of truthfulness, compassion, and tolerance.

Based in New York, Shen Yun Performing Arts’ mission is to revive the essence of Chinese culture.