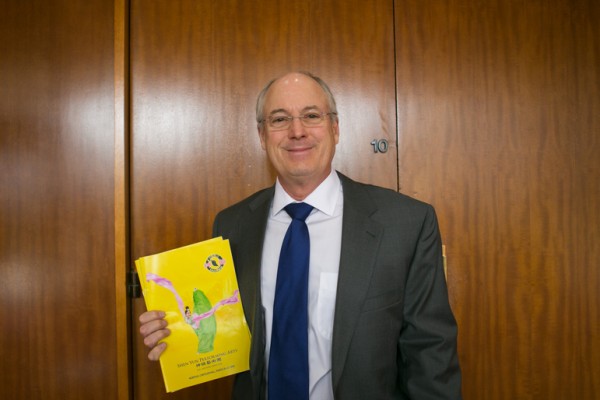 NORFOLK, Va.—Seeing divine beings on stage, expressed by humans, is not something we experience every day nor something we should take for granted, reflected John Conger after seeing Shen Yun Performing Arts at Norfolk, Virginia’s Chrysler Hall on March 26.

The retired defense contractor’s comments go straight to the heart of what Shen Yun strives to accomplish through the high arts of classical Chinese dance and orchestral music.

Shen Yun’s mission is to revive China’s ancient culture that has been nearly lost after six decades of communist rule. This culture that goes back 5,000 years was, according to beliefs, passed down from the heavens above.

Sometimes we walk through the divine but don’t notice it, and [Shen Yun] allows us to see it being expressed.
— John Conger

As the company’s website says: “China was once known as ‘Shen Zhou’—The Divine Land. This profound name describes a land where deities and mortals coexisted, and a belief that the divine transmitted a rich culture to the people of the earth.”

Mr. Conger left the theater with a full sense of what that means.

“Sometimes we walk through the divine but don’t notice it, and [Shen Yun] allows us to see it being expressed,” he said.

Mr. Conger said that for him, the experience was not about cultural differences between East and West.

“I think it is all pretty much the same. … You have to let go of some of your prejudice and find the divine where you see it, because it all is oneness.”

His overall impression of the Shen Yun experience was this: “It is a wonderful blending of spirituality and motion, and beauty. … It is uplifting and it is inspiring—and it is fun.”

Lori White, a marketing director who attended the same performance, also got a sense of the universality in the spirituality that Shen Yun presents.

“It’s very spiritual. And very pure,” she said, adding that it really made her think “of where we probably all should come from.”

The very first dance that opens Shen Yun addresses exactly that. “Salvation and Renewal,” as the program explains, portrays the time when the Creator “calls upon the multitude of divine beings to descend to Earth and fulfill their sacred vows.”

Ms. White said that no matter what religion you follow, Shen Yun shows that “everyone has some sort of spirituality.”

Even though she is Christian, she said, the traditional values Shen Yun conveys and ancient Chinese practices like meditation and self-reflection were also things that resonated with her.

“It is beautiful, it is a lovely cultural experience,” she said.

To her friends, Ms. White would describe Shen Yun as “spiritual and vibrant; it is beautifully choreographed—and it would be a wonderful experience.”