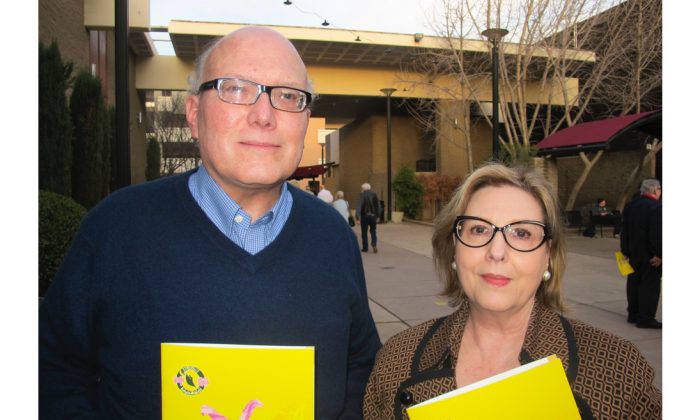 Shen Yun’s world-class artists use classical Chinese dance and traditional Chinese music to revive 5,000 years of ancient culture. Based in New York, the company tours the world with an all-new performance each year.

“I could not believe how delicate the females are when they dance—it’s powerful. They’re moving very quickly. Tremendous athletes, I think, but they’re so graceful,” said Mr. Polgar after attending Shen Yun at the William Saroyan Theatre in Fresno, California.

It was all working together into something exceptional, never seen before.
— Silvana Polgar

“It was all working together into something exceptional, never seen before,” Mrs. Polgar said. “It was an exceptional narrative of history through the dance and music.”

“It was a charming story, and it was performed very delightfully,” Mr. Polgar said. “It just made me smile.”

Mrs. Polgar was moved by the dance piece “Path of Hope,” which depicts the oppression of Falun Dafa in modern China.

“It was very touching,” she said.

Falun Dafa, a traditional Chinese meditation discipline based on truthfulness, kindness, and tolerance, has been persecuted in its homeland since 1999.

Ancient moral values and belief in the divine are at the heart of traditional Chinese culture, Shen Yun’s website explains. Shen Yun aims to keep this culture alive today.

“It’s hard to express spirituality in normal words, it’s more something that you feel,” said Mr. Polgar. “There were moments … that I felt deeply touched.”

He was particularly fond of the erhu, a traditional Chinese two-stringed instrument played with a bow.

“I thought [it] was extraordinarily played,” he said. “It must have been very difficult to get as many notes out of it as she did, and I found it very touching.”

The erhu soloist in Shen Yun played a piece titled “Divine Elegance,” which moved Mr. Polgar from almost the first note. The erhu is a 4000-year-old instrument is known for its extraordinarily expressiveness. “In the hands of a master, the erhu transforms into a vehicle of joy, sorrow, grace, or tenderness,” says Shen Yun’s website.

“It reached my soul,” Mr. Polgar said. “It was beautiful.”