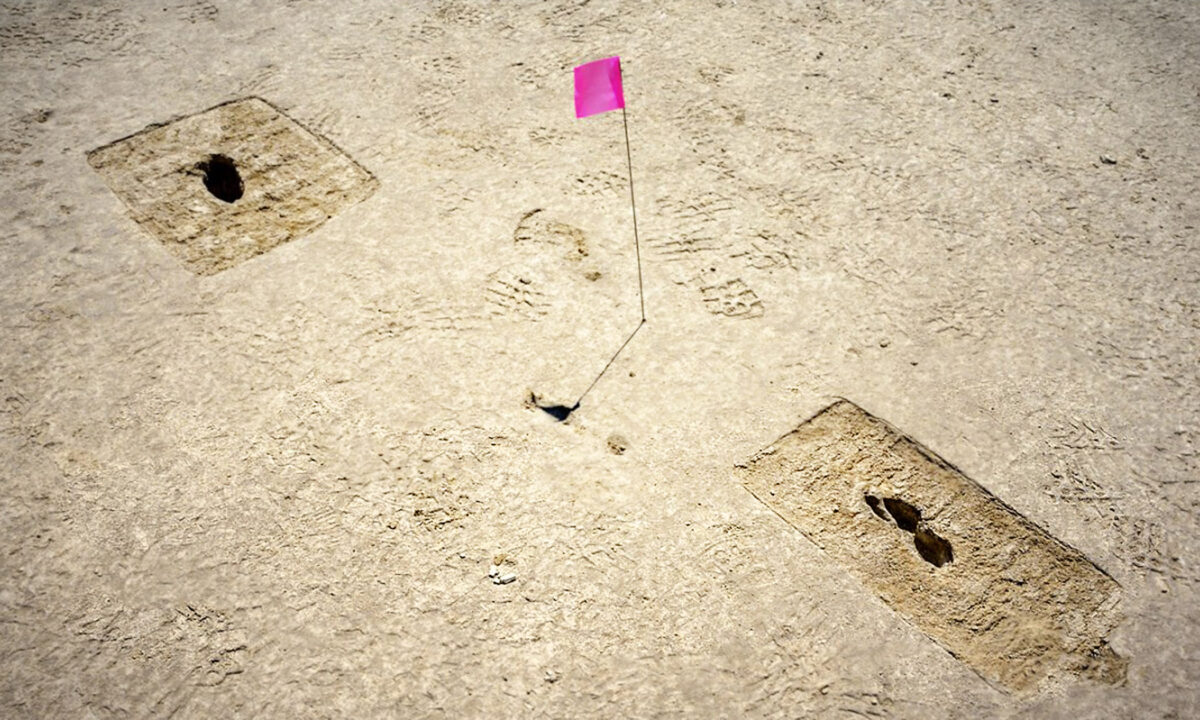 Researchers in the salt flats of Utah were driving to a prehistoric open-air hearth site when they spotted what were determined to be unshod human footprints dating back to the late stage of the ice age, some 12,000 years ago.

Located in the Air Force’s Utah Test and Training Range (UTTR), the tracks were picked out by Thomas Urban, from Cornell University’s Tree-Ring Laboratory. Stopping to look, they saw what are called “ghosts tracks”—footprints that appear suddenly for a short time, when moisture conditions are just right, before disappearing.

“It was a truly serendipitous find,” Urban told Cornell University.

The researchers returned the next day, and Urban employed a novel application of technology for geophysical research to scan the area. Surveying one of the two sets of tracks using ground-penetrating radar, he revealed the existence of unseen tracks—a method he helped refine while exploring a more extensive, older set of human footprints at White Sands National Park in New Mexico.

Excavating a subset of the tracks, Duke confirmed the hidden footprints and that they were barefooted, locating and documenting 88 prints altogether.

“As was the case at White Sands, the visible ghost tracks were just part of the story,” said Urban. “We detected many more invisible prints by radar.”

While traditional archaeology relies on the discovery of bones and tools, which are hard to interpret, human footprints offer unequivocal evidence of human presence and insight into human behavior in remote ages.

The footprints of adults and children at UTTR give insight into family life at the time of the Pleistocene, when the region of Utah’s Great Salt Lake desert looked much different.

“Based on excavations of several prints, we’ve found evidence of adults with children from about five to 12 years of age that were leaving bare footprints,” Duke stated in an Air Force press release. “People appear to have been walking in shallow water, the sand rapidly infilling their print behind them—much as you might experience on a beach—but under the sand was a layer of mud that kept the print intact after infilling.”

Wetland conditions have not existed in the Great Salt Lake region for 10,000 years, Duke added, which supports the hypothesis that the trails are over 12,000 years old.

Now, additional research is being conducted to confirm the find.

The footprints were discovered a half-mile from another site, where Duke previously located two open-air hearths in the UTTR, dating to the end of the ice age. One of these yielded the earliest known evidence of human tobacco use.

“We found so much more than we bargained for,” Anya Kitterman, Air Force cultural resource manager, said of the groundbreaking discovery.

The earliest evidence of human migration into the Americas was found at White Sands where, imprinted in the mud on the margins of what once was a shallow lake, now part of the Alkali Flat, were the footprints of teenagers and children with the odd adult. The oldest of these tracks dates back some 23,000 years ago.

Previously, it was thought that humans reached America around 16,000 years ago, after the melting of the North American ice sheets; the footprints in New Mexico tell a different tale.

Although the Utah site may not be as old or as extensive as the one at White Sands, it offers opportunities for discoveries of broader significance.

“We have long wondered whether other sites like White Sands were out there, and whether ground-penetrating radar would be effective for imaging footprints at locations other than White Sands, since it was a very novel application of the technology,” said Urban. “The answer to both questions is ‘yes.’”