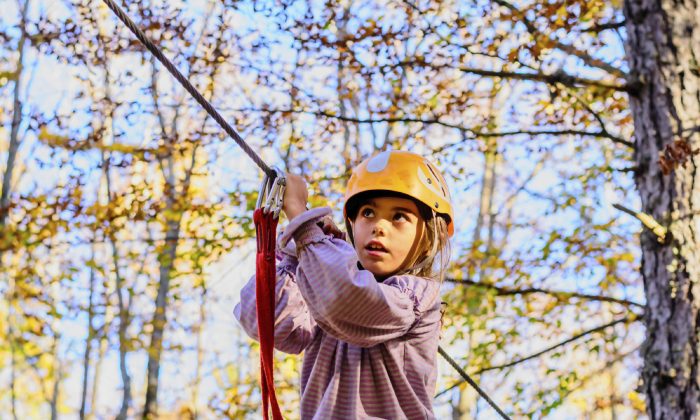 In a new study examining ziplining injuries, nearly half of the cases involved children under 10 years old. (valram/iStock)
Good to Know

Imagine flying through air at 60 miles per hour—the wind in your hair, your feet dangling just above the tree tops. It’s easy to see why ziplining has become so popular. But researchers say a rapid increase in serious zipline-related injuries—most of them among kids—suggests the need for safety standards.

Ziplining is a transportation system that involves a harness that glides along a cable, propelling people (or objects) with the momentum of gravity. The technique was first used over a century ago to move supplies in the Himalayas. Over the past decade, it has become a very attractive recreational activity.

A new study from the Center for Injury Research and Policy at Nationwide Children’s Hospital found the number of commercial ziplines in the United States rose from 10 in 2001 to more than 200 in 2012. In addition, there are now more than 13,000 amateur ziplines which can be found in outdoor education programs, camps, and backyards.

Kids sustained most of the injuries—almost half involved children younger than 10 years of age. Kids between 10 and 19 accounted for an additional 33 percent of injured patients.

When you consider that about three million children under age 14 get hurt playing sports or other recreational activities, the rate of ziplining injuries is relatively low. But researchers stress that the damage caused by ziplining can be particularly severe. The study, published online and in an upcoming print issue of the American Journal of Emergency Medicine, found that nearly half of the incidents resulted in broken bones, 15 percent sprains, and seven percent concussions.

Falls were responsible for more than three quarters of the injuries, followed by collisions (13 percent), usually with a tree or anchor support holding the zipline cable.

Several states have already responded to zipline hazards by adopting standards set by the Association for Challenge Course Technology, ASTM International, International Professional Zipline Association, or the Professional Ropes Course Association which cover design, installation, and maintenance of zipline structures. New ziplines are now engineered with extra safety features such as a dual cable design, and an automatic braking system to prevent injuries.

In other states, commercial ziplines are not required to follow standards from a national organization, but researchers are most concerned about private zipline operations. These involve do-it-yourself zipline kits or homemade designs built for backyard use.

According to Tracy Mehan, manager of translational research for Nationwide Children’s and one of study’s authors, parents should avoid installing ziplines at home, due to the inherent risks associated with the structures.

“Improper installation, maintenance, or use of homemade ziplines can result in serious injuries and even death,” Mehan said in a statement.

Based on their findings, researchers recommend that commercial ziplines and publicly accessible non-commercial ziplines be subject to uniform safety standards in all states and jurisdictions across the country. To prevent injury, they urge zipliners to follow posted rules, wear protective gear—such as gloves and helmets—and most of all, avoid use of homemade ziplines.