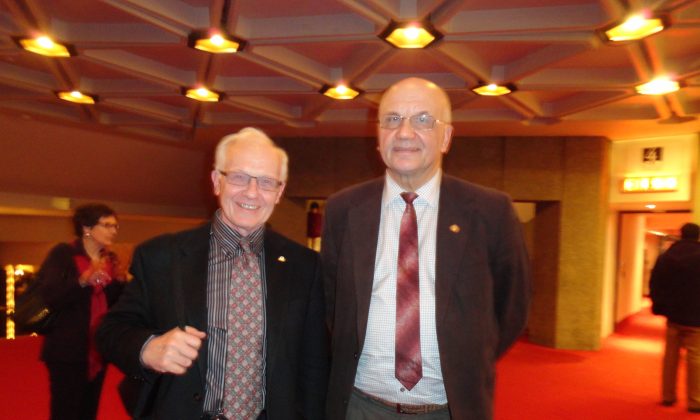 OTTAWA, Canada—Renowned physicists Victor Apollonov and Paul Corkum were celebrating 35 years of friendly relations between their two families with an evening out at Shen Yun’s opening night performance at the National Arts Centre on Thursday night.

The -27 Celsius temperature outside was soon forgotten after a heart-warming performance by the Shen Yun Performing Arts World Company in front of a full house.

“We have known each other for many years,” Dr. Corkum said. Dr. Corkum—known as the “father” of attosecond molecular imaging—is currently a physics professor at the University of Ottawa and also a member of the Order of Canada.

His friend, Dr. Apollonov, an award-winning Russian scientist at the forefront of the development of high-power state-of-the-art lasers, said he came to Canada 35 years ago. “And now it’s a 35-year jubilee of our relations,” said Dr. Apollonov.

“We are celebrating it here,” Dr. Corkum added.

“It definitely reflects very deep roots of Chinese culture,” Dr. Apollonov said. “And it’s a way of discovering the rich Chinese culture definitely. So it’s a great, great event in the cultural life of Canada.”

The 2014 visit marks the eighth straight year Shen Yun has come to Ottawa, one of the signature events in Ottawa’s cultural scene during the holiday season.

Dr. Apollonov said he spends a great deal of time conducting research and thinking about how to move society forward. He said Shen Yun reflects the buildup of a new promising society.

“Chinese culture can give us a lot of new bright pages of that [society],” he said.

“Everything that you can see here is tremendous,” Dr. Apollonov said.

Dr. Corkum said he was impressed by Shen Yun’s digital backdrop. Each year, Shen Yun’s team of visual artists creates vividly animated settings aimed at extending the stage and transporting the audience to a world where heaven and earth are one, explains the Shen Yun website.

Dr. Corkum described those animated settings and the actions on the backdrop as “movies.”

“It brought movies into the dance, and it integrated one into the other in a way I’ve never seen before,” he said of the backdrops.

Shen Yun was founded on a mission to revive traditional Chinese culture, a heritage largely destroyed after 60 years of communist rule in China. Shen Yun will perform three more shows in the next two days in Ottawa before heading to Montreal.