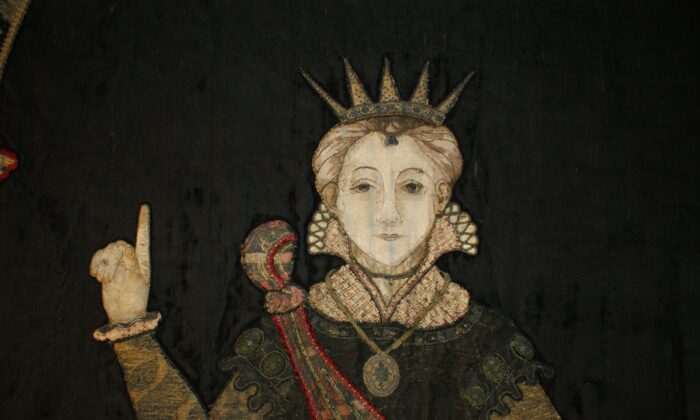 A detail of Penelope after restoration, one of the appliqué needlework wall hangings of noblewomen at Hardwick Hall in Derbyshire, England. (Claire Hill/National Trust)
Fine Arts & Craftsmanship

On the top floor of Hardwick Hall, five wall hangings of noblewomen—Zenobia, Lucretia, Cleopatra, Penelope, and Artemisia—once adorned the high walls of Bess of Hardwick’s small private chamber. These women were not only of noble birth but also of noble character, bringing to mind all 16th-century womanly virtues.

During the Renaissance, there was renewed interest in classical mythology and history, and the stories of Lucretia, Penelope, and Artemisia were quite popular, Elena Williams, senior house steward at Hardwick Hall, explained by phone. “People like Bess and those who were educated would have known of these stories, so they would have recognized and understood the hangings,” she said.

Architect Robert Smythson and Bess of Hardwick, also known as Elizabeth Talbot, Countess of Shrewsbury—the second most influential woman in England, after Queen Elizabeth I—created Hardwick Hall in Derbyshire, in the north of England, between 1590 and 1597.

Hardwick Hall is one of only a few surviving Elizabethan prodigy houses, country homes that were built to showcase wealth and great architectural design, often at the expense of livability. Bess expressly designed Hardwick to hang her richly colored textiles—such as those of these moral exemplars.

The composition of each appliqué wall hanging is the same: Three self-contained arches between two Ionic columns. The noblewoman is in the large central arch, flanked by the personifications of two of her virtues, who are each under a smaller arch.

The monogram initials on each wall hanging reflect Bess’s marriage to George Talbot, sixth Earl of Shrewsbury. The initials also represent the celebration of securing the family bloodlines, as Bess’s children from her second marriage married two of George’s children from his previous marriage.

It’s not known how long it took to make the embroideries, but under the embroiderer’s leadership, many members of the household staff helped to embroider and assemble the wall hangings.

Each hanging is richly decorated with appliqué embroidery, whereby different shapes are cut from a variety of fabrics and sewn together onto black linen, like a collage, to form figures and decorative elements. Each appliqué design, whether a noblewoman or an Ionic column, was then sewn onto the black silk wall hanging. The more complicated elements, such as the emblems at the center of the arches and the coats of arms were thought to have been workshop commissions.

Sumptuous fabrics were used for the wall hangings, including rich brocades with metal threads, silk velvets, and gold and silver cloth. Some of the opulent fabrics were from vestments, which were liturgical garments. Bess had previously been married to Sir William Cavendish, who worked as a commissioner for Henry VIII and was directly involved in the dissolution of the monasteries.

Interestingly, the religious motifs on the vestments were not used in the wall hangings but were cut away from the garments and stored for safekeeping, Williams explained. None of these fragments of vestments were noted in Hardwick Hall’s records, she added.

At the time the embroideries were being made, Bess and her husband George had a high-ranking house “guest”: Mary Queen of Scots. The devout Catholic queen was put in the Talbots’ care (both Protestants) by Queen Elizabeth I when she ordered her rival’s house arrest.

With the exception of the Cleopatra, the most striking thing about the embroideries is that after all this time we can still see them in their entireties, Williams said.

Williams explained the stories and some of the symbols in the four surviving “Noble Women” appliqué embroideries.

In the third century, Zenobia married Septimius Odaenathus, the king of Palmyra, Syria. After Odaenathus’s assassination, she ruled the Palmyrene Kingdom as regent and then de facto ruler for her son. During her reign, she conquered some of the Roman Empire’s eastern provinces. Eventually she was subjugated when the Roman Emperor Aurelian reclaimed the eastern provinces.

In the Hardwick Hall embroidery of Zenobia, the warrior queen is flanked by her virtues: “Magnanimity” and “Prudence.” Magnanimity represents a great heart and mind, showing a willingness to face danger and take action for noble reasons. Experts believe that her noble actions might refer to her carrying on her husband’s campaign and his work, Williams explained. Magnanimity holds a long staff, with a lion by her side, indicating, of course, bravery. To Zenobia’s left is Prudence, the ability to choose the right action at the right time. A snake, representing wisdom, wraps itself around Prudence’s right arm.

In the sixth century B.C., Sextus Tarquinius, the youngest son of the last king of Rome, was sent to Collatia, a town northeast of Rome. There are several versions of events. In one account, Sextus and Lucius Tarquinius Collatinus, son of the king’s nephew, debated over which of their wives were more virtuous. To settle the debate, they both paid surprise visits to each wife to see what she was doing while her husband was away. Sextus’s wife was enjoying a sumptuous banquet while Lucius’s wife, Lucretia, was weaving with her handmaidens. Lucius therefore won the debate.

That night, Sextus snuck into Lucretia’s bed chamber to seduce her. He gave her an ultimatum. She could succumb to his advances, marry him, and become his queen. Or if she refused, he would kill her along with one of her servants and claim that he killed them for Lucius’s honor after he caught them committing adultery. Lucretia stood firm in her devotion to her husband. Sextus raped her.

Lucretia summoned her father, husband, and two witnesses to inform them of the attack. While they were debating the right course of action, Lucretia took a knife and killed herself. The attack on Lucretia signaled the end of the Roman monarchy. Lucius Junius Brutus led Roman noblemen to expel the king and his family, resulting in the establishment of the Roman Republic.

In the Hardwick Hall embroidery of Lucretia, she looks down to her left where “Liberaliter” (Liberality) stands. Liberality is generous in her actions and thoughts and always believes the best of others. She holds a cornucopia overflowing with what is believed to be rare coins. The pelican in the background represents family loyalty and, again, generosity. In  legend, the mother pelican is known to feed its blood to its young in times of dire need. Therefore, Christians have used the pelican to symbolize Christ’s sacrifice.

Above Liberality is the Hardwick stag. To Lucretia’s right stands “Chasteti” (Chastity) holding an olive branch to symbolize marital chastity. The unicorn behind her indicates virginity. Above Chastity is the Hardwick family coat of arms.

In the fourth century B.C., Artemisia and her brother-husband, King Mausolus of Caria, created one of the seven wonders of the world, their Mausoleum at Halicarnassus. Both are buried in the mausoleum, but Mausolus died first. Artemisia, overwhelmed with grief, put her husband’s ashes into her goblet of wine and drank it so that she could be her husband’s living tomb.

In the Hardwick Hall embroidered hanging, Artemisia is holding a scepter and a goblet of wine that contains her husband’s ashes. “Constans” (Constance) is on Artemisia’s right side, with a swan symbolizing marital loyalty or marital fidelity. The sword near Constance echoes the swan’s message of loyalty. “Pietas” (Piety), to Artemisia’s left, symbolizes family loyalty.

At Piety’s breast is a small man, which refers to the tale of Pero and her father, Cimon. The story illustrates family loyalty under severe circumstances, as Pero breastfed her imprisoned father to save him from starvation. There’s also a stork that represents family loyalty.

In Homer’s “Odyssey,” Queen Penelope’s husband, Odysseus, has been away from home fighting in the Trojan War for many years. Every day, suitors ask for Penelope’s hand in marriage because Odysseus has been gone for so long and is presumed dead. Penelope doesn’t want to remarry because, in her heart, she believes her husband is still alive and will return. To appease her suitors, she tells them that she cannot possibly decide who to marry until she’s finished weaving a shroud for her father-in-law, Laertes. And each evening, she unravels the weaving she’s done that day.

In the Hardwick Hall embroidery of Penelope, she points the finger of her right hand skyward, in a gesture that says “Wait!” Her left hand rests on the roll of cloth she’s woven, which will never be completed. The personifications of her virtues “Perseverance” and “Paciens” (Patience) flank her. Perseverance holds an eagle, which seems about to take flight from her arms. Patience, on Penelope’s left, has a lamb pawing at her dress. The lamb often represents peace, humility, and innocence—a reminder for Penelope as she waits for her husband.

Penelope’s patience and perseverance pay off as Odysseus does return, after 20 years.