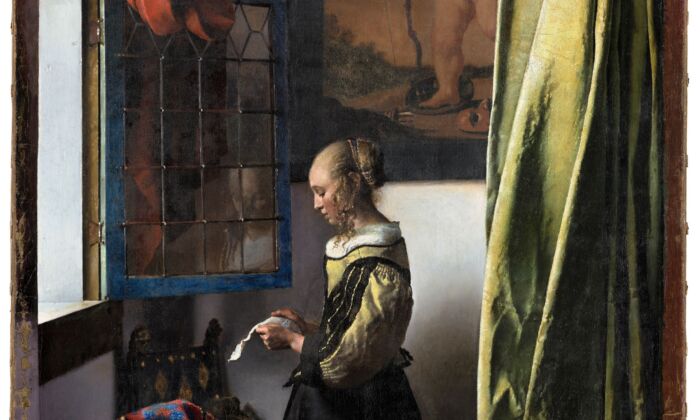 The exhibition ‘Johannes Vermeer: On Reflection’ at the Old Masters Picture Gallery in Dresden, Germany
By Lorraine Ferrier

Since 1742, visitors have delighted in seeing Johannes Vermeer’s “Girl Reading a Letter at an Open Window” at the Old Masters Picture Gallery in Dresden, Germany. But the scene is not the same as it was when the painting first left Vermeer’s studio around 1659.

In 1742, the elector of Saxony and king of Poland, Augustus III, bought 30 paintings from Prince Carignan in Paris, and the painting “Girl Reading a Letter at an Open Window“ was added as a complimentary gift to the king.

When the gallery acquired the painting, it was attributed to Rembrandt because the empty white wall in the background resembled Rembrandt’s style, exhibition curator Uta Neidhardt explained by telephone. “I think when people saw … the high quality of the painting, but they had no name [on it], … they thought it could be by Rembrandt,” she added.

For centuries, the painting showed a young lady engrossed in reading a letter. The vast, blank background gave viewers a sense of the lady’s solitude, and further emphasized her paying close attention to the letter’s contents.

But the blank background had been overpainted, altering the painting’s original state. Not until the 1860s was the painting officially attributed to Vermeer. And not until 2017 did experts realize that the overpainting happened decades after Vermeer created it.

Now, the painting has been restored according to Vermeer’s intention. And since 2017, restorers have removed layers of grime and overpainting to reveal a vibrant picture with a whole “new” meaning: love. The overpainted background concealed a framed picture of Cupid that Vermeer had originally painted as an important clue to indicate that the girl is reading a love letter.

To celebrate the “new” Vermeer, around 60 Dutch masterpieces are gathered together for the “Johannes Vermeer: On Reflection” exhibition at the Old Masters Picture Gallery.

The exhibition is in nine rooms, Neidhardt said. Each shows the artistic environment that Vermeer was immersed in, and the stylistic development of his paintings, especially those that he created in the same period as “Girl Reading at an Open Window,” the star of the show. In addition, prints, drawings, sculptures, and historic furniture from Vermeer’s lifetime are on display to show the rich influences surrounding the artist.

Neidhardt explained that in the second half of the 17th century, the Dutch Republic (formally the Republic of the United Netherlands) in what’s now the Northern Netherlands was Calvinistic, as opposed to the southern part of the Netherlands, which was Roman Catholic under the reign of the Spanish Habsburg Monarchy.

Vermeer lived in the North, in Delft, where many painters specialized in genre paintings.  The painters in the surrounding towns—Leiden, Amsterdam, Rotterdam, and Dordrecht—also specialized in the same subject matter.

Neidhardt explained that, previously, genre paintings depicted multiple figures. For instance, soldiers in a guard room or companies with five to ten people. “But these very focused scenes of single female figures or a pair: a gentleman and a lady together, … those very focused scenes with a detailed description of an interior with some still-life [elements] … and the open window (mostly on the left side), they were very modern in the 1650s, 1660s, and 1670s,” she said.

Vermeer took a lot of ideas from his colleagues, Neidhardt said. For instance, Gerard ter Borch was important to Vermeer, and so was Pieter de Hooch from Delft. Vermeer “took ideas … but he developed them in the most illusionistic manner. So he was better than all of them. He overtook them in the quality of his painting, and also in the manner he was able to look. When Vermeer looked at the surface of a plate, or a curtain, or the dress of a girl, or her hair, or her face, he saw much more than the others, and he was able to depict it with the help of paint on a flat canvas,” she said.

“Girl Reading a Letter at an Open Window” marks a change in Vermeer’s painting style. He had previously concentrated on creating history paintings, such as the mythological “Diana and Her Nymphs,” which is featured in the exhibition.

Also on display is a rare example of an early painting style he tried only once: Utrecht Caravaggism, the work of Dutch artists from the city of Utrecht who were influenced by the Italian artist Caravaggio. Neidhardt explained that “The Procuress” was painted under that influence using Caravaggio’s rather raucous, dramatic, and highly realistic scenes.

In contrast to Caravaggio, Vermeer’s oeuvre is dominated by a serene artistic sensibility. Many of his paintings feature solitary figures deep in contemplation. “Our painting, ‘Girl Reading a Letter at an Open Window,’ is one of the first steps in his new stylistic development,” Neidhardt said. He began painting interior scenes with one or two figures, where the focus is a corner of a room or entirely on the figure itself, like in the “Girl With a Pearl Earring,” she explained.

To highlight Vermeer’s change in style, Neidhardt has carefully selected some key works for the exhibition, which Vermeer painted in the early 1660s. Each painting is stylistically similar to “Girl Reading a Letter at an Open Window,” and each one features a woman, alone, and a window on the left side of the painting (although this is out of sight in “Letter Reader in Blue”).

Paintings of a similar style include “Woman with a Pearl Necklace” from State Museums in Berlin; “Woman Holding a Balance” from the National Gallery of Art, Washington; and “Letter Reader in Blue” from the Rijksmuseum, Amsterdam.

Vermeer painted many recurring motifs in his pieces, and contemporaries viewing his paintings would have understood their meaning. In “Girl Reading at an Open Window,” for example, we can see a letter, the girl’s reflection, and a curtain in the right of the painting. These motifs are explored in the exhibition. Many of these pieces include a painting in the background, a device Vermeer used to strengthen the message of the work.

Over 10 years after Vermeer painted his “Girl Reading a Letter at an Open Window,” he painted “A Young Woman Standing at a Virginal,” which is now owned by The National Gallery, London. Strikingly, the same Cupid painting appears in the background of both. According to The National Gallery website, Cupid is in the style of a 1608 book illustration, representing faithful love. In the London painting, there’s no love letter, but an empty chair indicates that the woman at the virginal is waiting to make music with her faithful love.

Neidhardt explained that Vermeer often included empty chairs in his paintings, indicating that the woman was waiting for or welcoming a man.

A different type of picture appears in the background of Vermeer’s painting “Woman Holding a Balance.” Here, faith is the subject. A woman stands at a table near an open window. On the table, there’s an open jewelry box and what appears to be opulent velvet. She’s lost in concentration as she holds a balance in her hand while attempting to steady and maintain the scales, in perfect harmony. “If you look carefully, you’ll see the balance is empty. There’s no gold or pearls,” Neidhardt said. She’s balancing the empty scales, perhaps to signify that she’s balancing her life, Neidhardt added.

In the background is a painting of the Last Judgment. Vermeer has cleverly mirrored and reemphasized the concept he was communicating in the foreground, that of balance, perhaps the balance between faith and the temptations of the world.

The exhibition: “Johannes Vermeer: On Reflection,” is at the Old Masters Picture Gallery in Dresden, Germany, until Jan. 2, 2022. To find out more, visit Gemaeldegalerie.SKD.museum