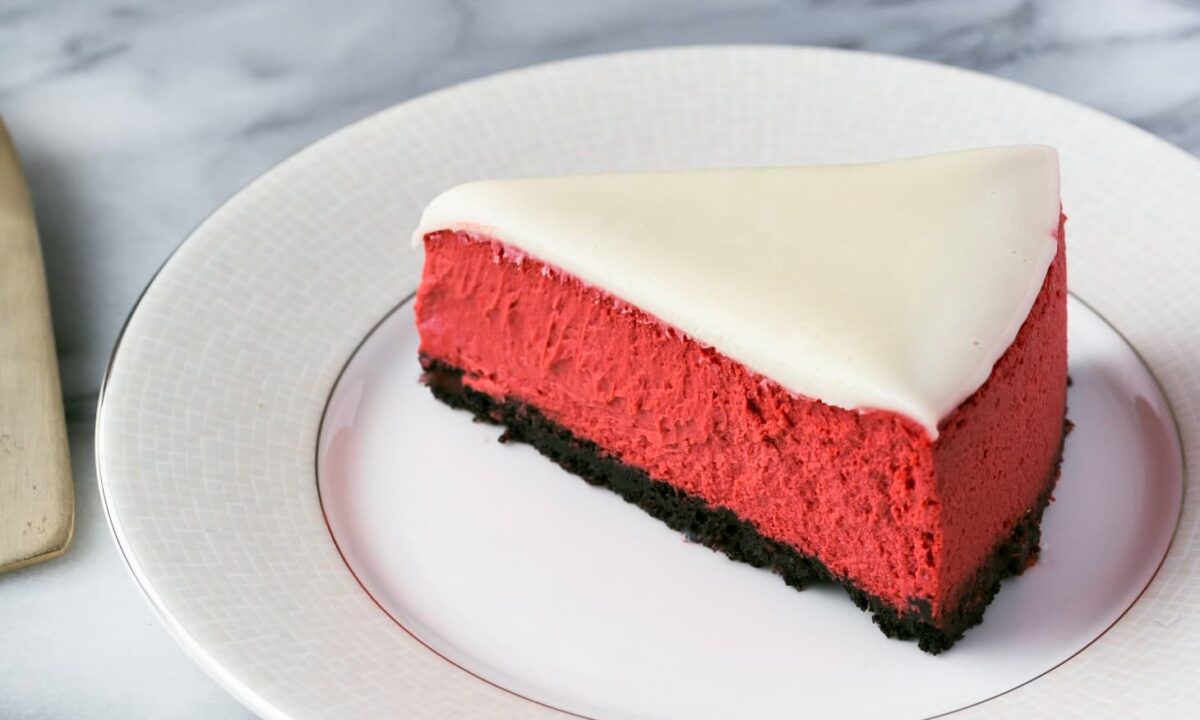 This stunning cheesecake has a chocolate cookie crust, a buttermilk-spiked and cocoa-scented filling, and a white chocolate ganache. (Meleyna Nomura/TNS)
Food

Cheesecake has a similar status—it’s not an everyday bake, and the thought of it suggests a bit of indulgence. Combining the two gives you a stunning dessert that is a little over-the-top in the best way.

Red velvet cheesecake is a play on the traditional layer cake. A red velvet cake is a fluffy, cocoa-scented cake that’s layered with a cream cheese or boiled milk buttercream. For this cheesecake version, I filled a chocolate cookie crust with a buttermilk-spiked and cocoa-scented cheesecake filling.

Instead of doubling down with a cream cheese frosting, I wanted to go for that milky white flavor for both flavor and color contrast. Buttercream didn’t feel right. (Straight from the fridge, it’s too firm of a contrast against the silky-smooth cheesecake.) Instead, I pour over a simple two-ingredient white chocolate ganache.

How Do I Bake a Creamy, Crack-free Cheesecake?

Because this is a red velvet cheesecake, I really wanted a smooth, velvety texture. My first version I mixed up was full of air, but switching to a food processor changed this drastically. Once I had the texture figured out, I needed to think about cracking. Cracks in cheesecake are common, and occur from either over-baking or trying to rush the cooling after the cheesecake is baked. For the best texture, I found the following tips to be helpful:

Tap out extra air bubbles. By gently dropping the pan on the counter before baking, air bubbles rise up to the top instead of staying trapped within.

Bake at 250 degrees F. This lower temperature helps avoid a raised edge and sunken middle, and provides a consistent texture from edge to edge.

Turn off the oven when the center of the cheesecake is between 145 and 150 degrees F. It’s difficult to tell when a cheesecake is done based solely on looks. It won’t look set in the middle, and a toothpick won’t come out clean. A thermometer is your best bet to make sure it’s fully cooked but not over-baked.

Let the cheesecake rest in the turned-off and cracked oven. Once the cheesecake hits 145 to 150 degrees F, turn off the oven, crack the door open, and let it rest for 1 hour.

Chill at least four hours, or preferably overnight. If you cut into a still-warm cheesecake, the texture will be totally different from one that has been allowed to fully chill. Give your cheesecake the rest it needs!

Can I Make Cheesecake Ahead of Time?

Cheesecake should not be eaten before fully chilling, meaning it’s the perfect dessert to make ahead because it almost requires it. Making cheesecake isn’t hard, but does require patience once it’s in the oven. The low baking temperature and intentional cooling take several hours. But once the cheesecake is in the refrigerator, it will patiently wait for you for up to three days.

For the Crust and Filling

Let the cream cheese, eggs, buttermilk, and heavy cream sit on the counter until all the ingredients reach room temperature, about 2 hours.

Arrange a rack in the middle of the oven and heat the oven to 350 degrees F. Place a sheet of parchment on the removable bottom of a 9-inch springform pan. Replace the ring and secure it to the base. The overhang will help you remove the cake from the base once baked. Rub a small pat of butter on the bottom of the lined pan and around the interior of the ring.

Make the crust: Roughly break up the chocolate wafer cookies into the bowl of a food processor fitted with the blade attachment. Add 1 tablespoon of the granulated sugar and 1/4 teaspoon of the kosher salt. Pulse until the largest pieces are about 1/4-inch, about 12 pulses.

Place the butter in a small bowl and microwave until melted, about 40 seconds (alternatively, melt on the stovetop). Pour into the food processor and process until the cookies are finely crushed, about 5 seconds. Transfer to the springform pan and use your hands or the bottom of a glass to press them evenly into the bottom. Press firmly but don’t pack it in too much or it will be difficult to cut when finished.

Bake for 10 to 12 minutes. There won’t be much visual change, but it should smell of toasty chocolate. Set aside to cool while you make the filling.

Make the filling: Reduce the oven temperature to 250 degrees F. Rinse and dry the food processor bowl and blade.

Add the cream cheese, eggs, buttermilk, cream, remaining 1 cup granulated sugar, remaining 1/4 teaspoon kosher salt, natural cocoa powder, red food coloring, and vanilla extract to the food processor fitted with the blade attachment. Process for 10 seconds. Stop the motor and scrape down the sides of the bowl with a flexible spatula. Repeat processing and scraping two more times, or until the batter is fully incorporated with no visible bits of cream cheese.

Pour into the prepared crust. Pick the pan up about 1 inch off of the counter and drop it carefully and evenly on the counter, repeating a few times to release any air bubbles.

Bake until the edges are firm and the center jiggles slightly and reaches 145 to 150 degrees F, 1 hour and 25 minutes to 1 hour 35 minutes. Turn off the oven and keep the oven door open a crack or prop it open with the wooden spoon. Let the cheesecake gently cool in the oven for 1 hour.

Place cheesecake on a wire rack. Run a paring knife around the edge of the pan and let cool to room temperature, about 2 hours more.

Prepare the glaze: After the cheesecake has cooled to room temperature, coarsely chop the white chocolate and place in a small bowl. Microwave the heavy cream in a small microwave-safe bowl or measuring cup until it just reaches a boil, about 40 seconds. (Alternatively, bring the cream to a boil in a small saucepan on the stovetop.) Pour over the white chocolate and let sit for 2 minutes. Add a tiny pinch of salt and whisk until smooth. Let cool for 5 minutes, stirring occasionally.

Pour the glaze over the top of the cheesecake, then use an offset spatula to spread it to the edges, trying not to let it go over the edges for the cleanest presentation. Pop any large air bubbles with the tip of a paring knife.

Cover the pan with aluminum foil or a plate. Refrigerate until completely chilled, at least 4 hours but preferably overnight. To serve, run a paring knife along the inside of the pan. Unlock and remove the outer ring. Hold one of the corners of parchment down, slide a large offset spatula underneath the cheesecake, and transfer to a cutting board or serving platter. Cut into slices and serve.

Recipe Note: Cheesecake can be refrigerated, well covered, for up to four days.