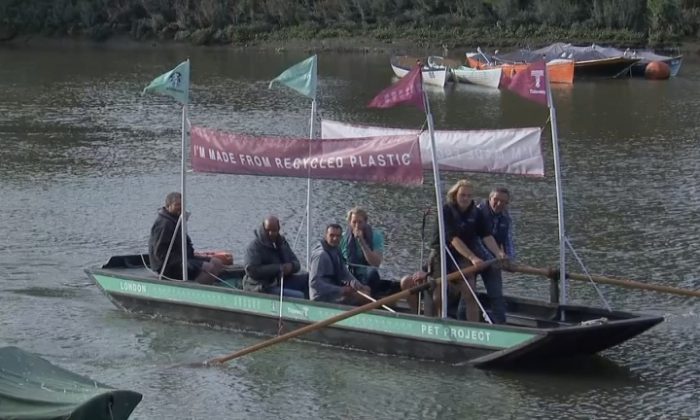 A boat made out of recycled plastic was launched on London’s Thames River on August 30, as part of a mission to tackle plastic pollution in Britain’s waterways.

PET Project, a 12-seater punt made out of 99 percent plastic waste, will take passengers on “fishing” trips to collect trash and raise awareness of the issue.

The boat, by environmental charity Hubbub, is only the second of its kind.

PET Project’s predecessor, Poly-Mer, was launched in November last year and has been used to collect 210 pounds of recyclable plastic so far, including 762 plastic bottles, according to the organization.

Speaking as PET Project made its maiden plastic fishing trip, Hubbub director and co-founder Gavin Ellis said: “It shows that it’s not just an issue that’s in faraway oceans, … this is an issue that’s present here in London and in the U.K., but actually there are lots we can all do about it.”

He added that the collected plastic would go towards creating similar boats.

The vessel is made primarily from Plaswood, a recycled plastic material that is used as a substitute for wood.

Boat builder Mark Edwards MBE said the “laborious” process took two men and six weeks, but that it was “nothing” for a craft that would last 100 years.