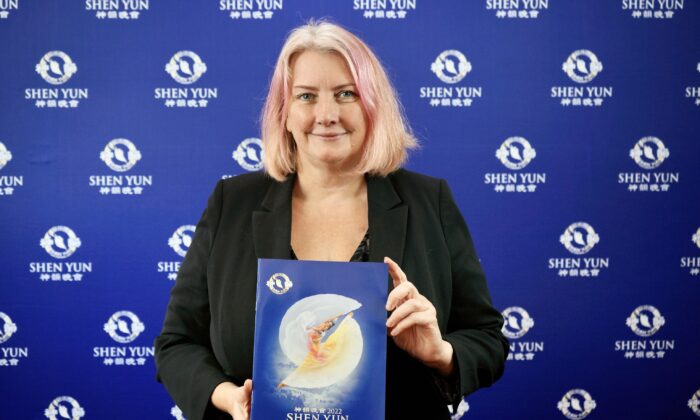 ADELAIDE, Australia—For many who come to see the annual performance of Shen Yun Performing Arts it is like seeing through a window into the traditional culture of China. For South Australia’s Legislative Council member and Greens parliamentary leader, Tammy Franks, it was so much more.

Ms. Franks, who is the parliamentary leader of the South Australian Greens Party attended the Shen Yun Performing Arts performance at the Festival Centre on May 11 and said that the performance showed her the “real culture in China” which she remarked was “so much more than the contemporary, CCP (Chinese Communist Party) government.”

“It is a very sad situation when we see that [real culture] oppressed in various ways and, and people’s history denied,” she said, acknowledging some of China’s dark secrets depicted in the show.

Ms. Franks expressed her appreciation for Shen Yun’s celebration of Chinese culture, showcasing “with dance and stories and strength.”

New York-based Shen Yun was founded, in 2006, with a mission of reviving the traditional culture of China and sharing it with audiences around the globe through world-class performances of classical Chinese dance and music.

Shen Yun has seven companies that tour the world simultaneously with the mission to revive Chinese culture through their performances.

“It was wonderful to see the Chinese culture and their stories of divinity and origin here in little old Adelaide,” Ms. Franks said. “It’s wonderful that this is shared around the world.”

It was not the first time the elected official had come to experience a Shen Yun performance, and she noted that watching the show again had brought back past memories of the show’s beauty and “the exquisite dancing set and stories.”

Ms. Franks said she “absolutely” would recommend this show to other people, “it is a joyful and beautiful and exquisite performance. It is something that you can enjoy from the age of 9 to 99 and beyond.”

Madeleine Neville, a senior consultant at Datacom was also one of the audience members in attendance, she said she had a  “phenomenal”  experience watching the performing arts troupe.

Ms. Neville said it was the first time she had experienced something similar to this performance.

“For me, it’s going to be life-changing; I think I’m going to be remembering this for a long while,” she said.

She noted that  from the moment the curtain lifted, she sat in the audience in “amazement.”

“From the very first moment, every single dance, you could just tell that there was so much effort put into that and that it was perfectly curated,” she said.

Ms. Neville described Shen Yun as “a rich tapestry of Chinese history” that “would change the way” people look at Chinese culture in general.”

But the piece that moved her the most was the contemporary story titled “Insanity During the End of Days,” which left the senior consultant in tears.

The piece told of a tragedy of a father unknowingly aiding the killing of his own daughter after she was caught up in the Chinese communist regime’s persecution of those who practice the spiritual practice of Falun Dafa.

Falun Dafa is an ancient Chinese self-improvement discipline that teaches practitioners of the faith to live by the principles of truthfulness, compassion, and forbearance. It has been targeted by China’s communist regime since 1999, with practitioners persecuted, illegally detained, and even killed for their organs.

Since its inception in 2006, Shen Yun has told stories of the persecution of Falun Dafa practitioners to raise awareness of the atrocities that have continued to take place in China.

Asked about Shen Yun’s mission to revive traditional culture through their performances and the importance of bringing back traditions, Ms. Neville said that it was both “incredible” and “important.”

“It really separates some [of the] current ideals that people have makes people reanalyse the situation and then get a new impression from that. So, it’s definitely sort of changing our mind about relooking into the culture and its history,” she said.