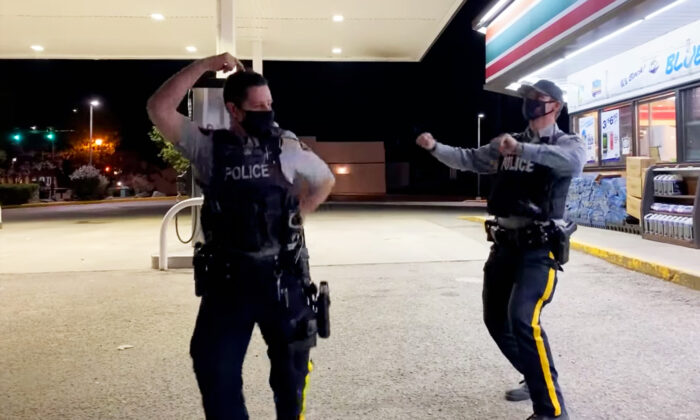 They “busted a move” to make the four jittery teens and their mom laugh.

Mom Ada Madam, 36, filmed the officers’ groovy moves on her phone and posted it on Facebook—where it went viral.

Ada and her kids pulled up to the convenience store in Vanderhoof, British Columbia, late August at around 10 p.m. They were tired and hungry after spending the day preparing for a family event.

Two RCMP constables, Matt and Steve, were inside the store. And Ada noticed her daughters cringe.

“I kind of got uneasy, but also felt peace seeing they were kind of young and looked happy,” Ada told The Epoch Times.

She described what she calls an “inter-generational trauma” First Nations people have of law enforcement.

“My personal experience is they’ve often bullied me, or given unnecessary tickets, one of which I successfully disputed,” Ada said.

But the mom saw an opportunity to break down barriers for her kids. When the constables exited the 7-Eleven, she approached them and explained her teens’ apprehension.

She surprised them by asking if they’d put on a show to put her kids’ anxious hearts at ease. “It will go viral,” she promised. “We just need some good in our lives.”

The friendly officers were game, and “got busy” to the tune of her kids’ choosing.

Afterward, Ada thanked Officers Matt and Steve, and later posted the video on Facebook where, as she’d promised, it quickly went viral.

“It’s not uncommon that people approach on the street with questions or concerns, but I definitely was not expecting to be asked to dance on camera,” Matt later told CKPG Today. “But here we are, and it was awesome.”

“We want to bridge the gap between the police and the community,” Steve said. “To be able to make them laugh after a tough year and a half felt pretty good for us. We had no idea it would blow up like this!”

The teens shared the video with their friends, and it even made the news.

“We all drove home laughing and happy,” Ada told The Epoch Times. “I let them know not all guys in uniform are bad. Like I said, it’s inter-generational trauma, so it will take some time.

“No matter what we go through, keep spreading love and joy. Be that shining example; you never know whose day you might make.”