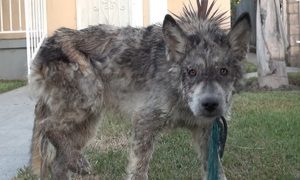 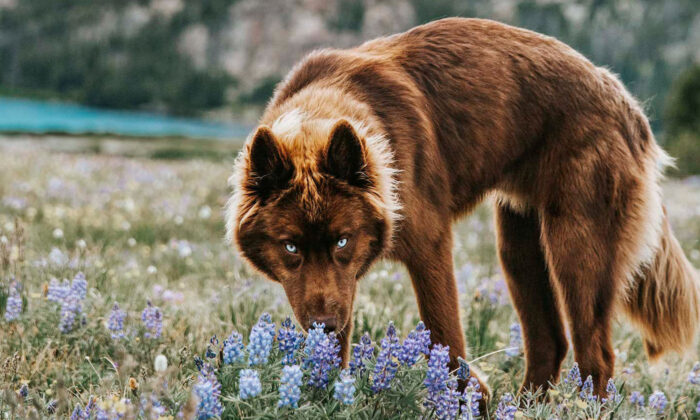 An extremely unique husky with a chocolate-brown coat and strikingly deep-blue eyes is often mistaken for a wolf, according to its owner.

Quoi, a 10-month-old puppy, whose full name is SeQuoi Tenko (tenko in Japanese means heavenly fox), enjoys walks in the woods with his owner Nicole Anne Spahn. The pooch is known to surprise curious walkers with his striking resemblance to a wolf.

“Everyone wants to stop and pet him. Everyone asks ‘what is he?’” Nicole said. “Some people try to guess what mix of dog he is; they never believe me that he is a full Siberian Husky.”

Additionally, Nicole says that when inquisitive kids walk past the pair and ask their parents which breed Quoi is, many respond saying he is “a baby wolf.”

However, according to Nicole, it is only those people who do not really know about wolves who mistake Quoi for one.

“I have thought about getting a shirt made that says ‘Yes, he’s a Siberian Husky’ because when we are out in public I have to say it at least a dozen times,” Nicole joked.

Nicole brought Quoi home when he was only 2 months old after she failed to adopt a rescue dog.

The photographer initially was looking to rescue an older dog and was hoping to find a 2-year-old but stated that most husky rescues in the area don’t permit adoption until the person is a homeowner.

The 33-year-old woman continued searching the internet when she stumbled upon a picture of Quoi’s sibling that was an Antigo-colored black husky. As Nicole contacted the breeder for more information, she found a listing of the rare husky Quoi.

“I just liked that he looked like a little fox,” Nicole, who currently lives in a truck camper, said.

When she initially came across Quoi, Nicole found that he had a white dot on his head that she considered “cute” and thought that it resembled a “third eye.” However, “that white dot has faded and gone away as he has gotten older,” Nicole claimed.

While most Siberian Husky dogs are white or gray and white, it is rare to find a brown husky without patches of white.

However, Nicole said that “Quoi isn’t technically fully brown, he does have some white on his chest, and on his toes, and a few strands of hair that are white in his tail.”

Quoi, who is a moody pooch, loves to walk, play, and eat turkey heart treats.

“He eats mostly raw food with some kibble,” Nicole said. “He gets fed raw cow bones with marrow in them as an after-dinner treat.”

The adorable rare puppy also made his debut on Instagram in March this year and has amassed over 19,000 followers.

Since Nicole welcomed Quoi into her life, the two have shared an inseparable bond. The duo talk and understand each other really well. “He knows which days I need to sleep in, and I know which days he needs extra time at the park to play,” Nicole said.

The two even enjoy playing with each other. “We wrestle a lot, I pick him up and spin him, we play like we’re both kids,” Nicole added.

The unusual puppy has even been a guest at Nicole’s friend’s wedding in Montana, where the bride announced that he is not a wolf but a Siberian Husky.

“He comes absolutely everywhere with me, since the day I got him we haven’t been apart,” Nicole shared.