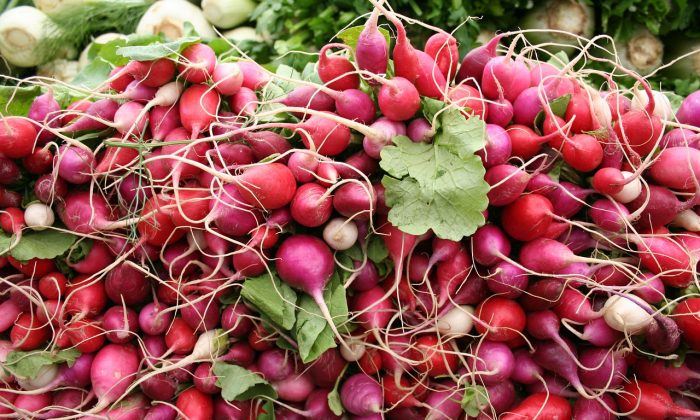 The radish is one of the oldest cultivated vegetables in the world. Today they are known mostly for their pungent crunch, but radishes also have a history of healing digestive problems, breathing complaints, poor circulation, and other issues.

Radishes hail from the cruciferous or brassica family of vegetables—a group that includes broccoli, cabbage, cauliflower, and kale. Brassicas have earned new respect in recent years as animal studies point to antibacterial, antiviral, and anti-inflammatory effects, as well as reduced cancer risk with consumption of these vegetables.

Research on radishes in particular has shown that they may reduce blood sugar and lower breast cancer risk.

The radish name comes from the Latin name for root: radix. The botanical name, Raphanus, comes from a Greek term which means “easily reared,”—a reference to how quickly radishes can sprout and grow.

Although we mostly consider the radish root to be the edible portion, all parts of the plant are good to eat.  Raw radish greens are like a rustic arugula. Cooked, they’re similar to mustard or turnip greens. In traditional Chinese medicine, radish seeds are a remedy for obesity.

Radish roots come in a wide variety of shapes and colors, from small red globes to long white clubs. The heirloom “watermelon” radish has a green skin with a red interior.

Radishes are very closely related to turnips and rutabaga— other brassica roots with a similar punch and crunch. All brassica roots are a good source of vitamin C and various B vitamins, as well as essential minerals such as potassium, calcium, magnesium, copper, and manganese.

However, some radish varieties have features the others don’t.

Red and white radishes dominate the supermarket, but black Spanish radishes are gaining more attention. They’re about the size of a baseball with a tough black skin.

All radishes have a pungent heat that is used to resolve digestive issues and clear phlegm, but black radishes excel in this regard.

In traditional Chinese medicine, for example, black radish is used to clear excess heat and stuck qi, especially in the liver and gallbladder.  Herbalists from other folk medicine traditions use black radishes in a similar way. These vegetables have even been known to help dissolve gallstones and kidney stones.

Black radishes are very crunchy and have a bitter flavor that other radishes lack. In traditional herbal medicine, bitterness is associated with purification and detoxification.  These qualities happen to be black radish’s claim to herbal fame.

Black radishes are particularly rich in glucosinolates—a sulfuric chemical associated with pungent plants such as mustard and horseradish. In animal studies, glucosinolates have been shown to help the body rid itself of toxins and increase metabolism.

Asians predominantly favor a large white winter radish that the Japanese call daikon, a name which means “big root.” While people in the West always serve radishes raw (like the classic French combination of red radishes, butter, and sea salt), daikon is traditionally pickled or cooked. Daikon has a milder heat, a tad more sweetness, and a higher water content that works well in a soup or stir fry.

Like other radishes, daikon is used for digestion and detoxification, but it has also long been used to improve circulation and relieve headaches.

Daikon is also used as a remedy for weight loss and balancing blood sugar. It is high in fiber and nutrients, low in calories, and very hydrating.

11 Vegetables Anyone Can Grow on Their Own

As far as anyone can tell, radishes originated in China. They were cultivated in ancient Egypt since the time of the first pharaohs, and they continued to make their way west over many centuries.

However, one radish native to South America has features not found in its Old World cousins. According to the International Potato Center, a root and tuber research institution, maca is the only brassica known to have been domesticated in the Americas.

Maca is a particularly hearty radish-like vegetable which originates from Peru and Bolivia, high in the Andes mountains. The National Research Council calls maca “one of the lost crops of the Incas.” Others refer to it as “Peruvian ginseng” due to its reputation for increasing fertility in both people and livestock.

Maca has a touch of radish spiciness, but is sweeter with a slight butterscotch flavor. It also has much more iron and other phytochemicals not found in other radishes.

While most radishes are associated with digestion and detoxification, maca is more of an adaptagenic herb. Studies have shown that maca may reduce stress, calm the mind, strengthen the immune system, and balance hormonal levels particularly in menopause.  Other studies suggest that maca may help with chronic fatigue and osteoporosis.

The Super Health Benefits of Maca

Maca comes in three basic colors—yellow, red, and black—and each has its own special taste and medicinal specialty based on how it has performed in research. Yellow is the sweetest and least expensive. Red (sometimes called pink or purple maca) is often recommended for energy, female hormonal balance, depression, and for resolving prostate cancer. Black (the most expensive) is associated with male fertility, memory, and bone strength.

The root is traditionally boiled and made into a broth. But you’re more likely to find it in the health food store ground into a powder, which can be added to smoothies, soups, and baked goods. Maca extract—which is a more concentrated product—is available in pills and liquid.

Maca is a safe, well-tolerated herb. For the people who live in maca’s native land, it’s an everyday staple, as common as potatoes. A typical dose of maca powder ranges from a half teaspoon to two teaspoons a day. Consult a qualified health professional who has clinical experience with maca to get an appropriate dose for your particular case.