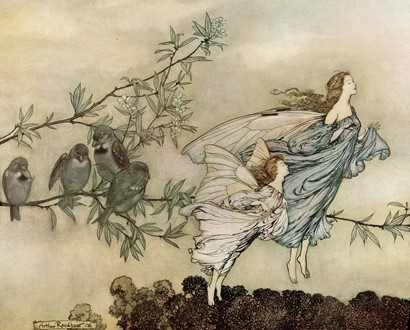 A detail from an Illustration of fairies and birds by Arthur Rackham. (Public Domain)
Arts & Tradition

The child in us knows about fairies. There are more than fairies, of course—elves,  gnomes, giants, grouchy trees, lecturing flowers, legendary heroes, and men who sleep for 20 years. Fairies and their buddies live under, over, and beyond the world we see. We know about them because illustrators like Arthur Rackham (1867–1939) offer adventures to their invisible world.

J.M. Barrie’s “Peter Pan in Kensington Gardens,” illustrated by Rackham and published in 1906, stated: “Fairies never say, ‘We feel happy.’ What they say is ‘We feel dancey.’” The illustration is richly colored and carefully detailed. In lush sepia tones, fairies swirl and twirl and float with happy elves on a bed of daisies amid berry-filled bushes. The drawing vibrates with motion and life.

Adventures for the Young

Rackham’s illustrations give children a way for their imaginations to travel to mysterious lands for an adventure. In the process of having some serious imaginative fun, they learn about their own world in Rackham’s detailed drawings of the natural world.

Rackham depicts figures and places that children can see and enter. A child can fly near a branch where fairies have a tiff with birds and haughtily fly away, sit near gnomes crouched in grouchy old-growth trees, or lounge near a rock with drowsy elves.

These are safe adventures. Children can jump into a scene when scary creatures appear and know they are safe and sound. They can ask questions about what is happening and find solutions. What will the villagers do? What can I do to help them?

In one of Rackham’s illustrations for Flora Annie Steel’s “English Fairy Tales,” a young woman looks down at three heads, in a pool of water, looking up. A child might wonder: “Is she asking them for directions?” Their expressions seem to suggest they want to talk with her. To find out what is happening, children have to read the story.

Rackham introduces adults and young readers alike to classic literature, such as with his illustrations of Norse legends and Greek myths, and the plays of Shakespeare. For instance, Shakespeare’s “A Midsummer’s Night Dream” is the perfect vehicle for Rackham’s talent, with characters looking like fairies, elves, or donkeys. His illustration in “Siegfried and the Twilight of the Gods,” shows Siegfried leaving Freia to seek his destiny. This is the land of the gods, so Freia can stand in a strong wind at the edge of a precipice while Siegfried blows on his horn amid swirling flames. Here, a child is perfectly safe while his or her imagination flies with the wind.

Nature comes alive in Rackham’s illustrations. A child walks by a large solitary chrysanthemum in the middle of winter. The bundled figure in the picture seems frightened, but a young reader is not afraid and wants to find out what the flower is telling the little girl.

The Power of Pictures

Research has shown that pictures in storybooks provide a big incentive for children to read. When young readers sound out the words and start to make sense of the text, they already know what the story is about. The pictures have already told the story. Now children want to read it for themselves. Well-executed illustrations make the reading enjoyable and enriching.

The skills required for great children’s illustrations include more than mastery of the figure at all stages of human development—babies, children, young adults, the elderly. They must present situations from a child’s perspective.

Rackham is a master of expressions that children can understand. He gives insight into what a figure is saying or what that figure is going to do. He enlivens a conversation taking place between a child and an elf or fairy, or a lecturing chrysanthemum.

As industrialization kept people in factories for hours a day, Victorian society had a renewed interest in nature. Rackham gave the young reader a natural world in his illustrations of plants and animals. His illustrations were made in natural settings where fairies and other creatures could frolic.

The Victorian Age recognized that children needed pictures to learn. The newly wealthy middle class bought books with beautiful illustrations, not for themselves as they were too busy making a living, but for their children.

Rackham showed differences of scale. He made tiny winged creatures in acorns, and giants standing over their cooks ordering dinner. His pictures were not meant to teach measurement, but to present the concept of large or small in spoonfuls that children could swallow.

Rackham’s illustrations sought to preserve children’s innocence and their sense of play; his work was meant to amuse. The illustrations might have a lesson embedded in the picture, but he also gave his young readers something nonsensical to laugh about, such as a gnome orchestra playing for children. This was an immersive fantasy world that children could jump into and enjoy.

The Business of Illustrated Books

Color printing was taking off during Rackham’s career. According to Corryn Kosik, who wrote about the history of illustration for the Rockwell Center, English printer Carl Hentschel invented the Colourtype process, a technology that enhanced illustrative print for Rackham’s works. Beginning in 1905, Rackham’s publisher William Heinemann saw an opportunity to sell the illustrator’s original drawings when the illustrated books were released. Rackham’s original drawings almost sold out when “Rip van Winkle” was released. This business model became standard for his work.

His illustrations were soon accepted as works of fine art. “Exhibiting original illustration work as limited editions in a prestigious London gallery was beneficial to all illustrators during the time and has had a lasting impact on the medium since,” Kosik stated on the Rockwell Center’s website. Illustrations soon began to become part of popular art such as gift books, greeting cards, and souvenirs. Deluxe gift books became the popular holiday gift for children. Often, they became collector’s items when the children grew up.

Rackham did his best work during what is known as the Golden Age of Illustration (circa 1871–1919). His deluxe gift books were eagerly sought after by parents for their children during the Edwardian period in England and later in the United States.

Rackham’s illustrations help the child in all of us see what is invisible and alive, and he made generations of children happy about reading. At this time when families need to be especially diligent in educating their children well, his illustrations take children to a land full of adventure, danger, eeriness, and mystery. A child can learn what is dangerous, what is exciting, and what deserves caution. An illustration says it all.