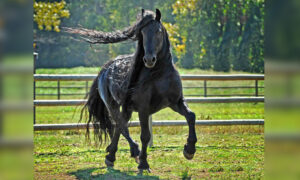 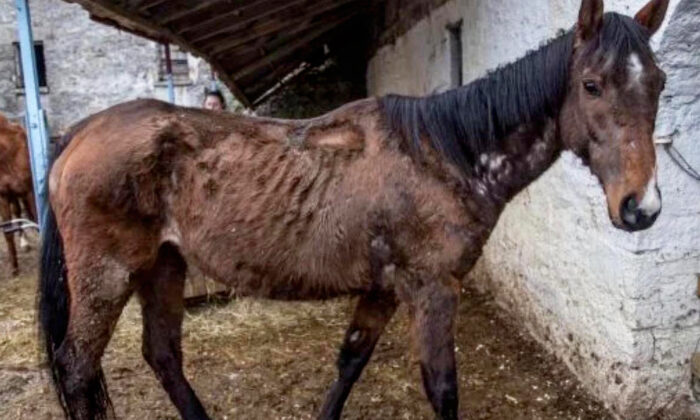 Racehorse Sold for Over $300,000 Left in Filthy Barn to Starve Is Rescued and Now Thrives

A thoroughbred racehorse worth over US$300,000 almost met a tragic end when she was abandoned in a stable to perish. However, in the nick of time, a charity found and rescued her and she survived, despite the huge odds stacked against her.

Today, 9-year-old War Celeste is in the loving care of fosterers, living the life she deserves.

Bred in the United States in 2012 by Swettenham Stud, Celeste was auctioned off to China Horse Club for 240,000 pounds (approx. US$328,000) by Watership Down Stud, a stud farm owned by composer Andrew Lloyd Webber.

With an impressive lineage—her dam, Dawn Chorus, was mated with ex-racing horse War Front, one of the most expensive sires in the world—Celeste was sent to Ireland to be trained. But when she hadn’t raced by the age of 3, she was sold to Bowman Bloodstock for just 15,000 euro (approx. US$17,500) for breeding.

Her fall from the elite was “swift and heartbreaking,” Dorothy Collin of Ireland’s My Lovely Horse Rescue (MLHR) said in a statement to The Epoch Times.

“We found Celeste on a cold winter’s morning in February 2018, slowly starving to death with 10 other beautiful thoroughbreds in a barn in County Cork,” Collin said. “The individual who owned her at the time of her discovery in the barn has since fled the country and is still wanted in connection with animal welfare abuses.”

The charity was alerted that 11 horses and a number of cats and dogs were being kept in “deplorable conditions” and they thus went to investigate, in partnership with the Department of Agriculture and the horse pound. “Those of us there that day will never forget what we saw,” Collin said.

Some horses had access to a small, muddy paddock, but four were trapped inside individual stalls, standing on heaps of manure so tall that diggers had to excavate an escape route. “They came out slipping, falling, terrified,” said Collin.

Celeste was one of the five horses that were in danger of being euthanized on site. But she got her second chance; as MLHR took the five “broken creatures” into their care, eventually saving three and restoring them back to health.

En route to their rescue center in Kildare, Ireland rescuers had no idea they had equine royalty in their midst.

“Like the others, [Celeste] was emaciated, her feet overgrown, her skin in terrible condition,” Collin recalled. “She’d been locked in a stable and hadn’t seen daylight in a long time. She was covered in lice, and so ill that anything like treatments for lice or worms had to be delayed until she was strong enough or they might have actually killed her.”

So began the slow, patient process of rehabilitation, a re-feeding program, and vital loving care. Rescuers acknowledged Celeste’s trauma and marveled at her unbreakable spirit.

“She hated [open spaces] and would get into such a panic, literally crying to be let back inside, and only calming down when ‘safe’ once more within the stable walls,” Collin explained. Yet “like a prisoner emerging from the dark,” Celeste slowly learned to enjoy her freedom.

Collin recalls that Celeste worked with her rescuers as if they were in this thing together from the beginning.

The “wonder of a horse” retained her quiet nature and is “very ladylike in her movements,” Collin said. She prefers women and is not food-orientated at all, even after her ordeal.

As Celeste’s recovery progressed, MLHR fielded interest from breeders, and sent the horse to long-time fosterer Martin Laffan and his granddaughter, Abi Plunkett, who helped her find expression as a competitor. Boasting a “soaring” jump, Celeste won a championship in the “unraced” class, and her fosterers hoped to show her at the Royal Dublin Horse Show, which didn’t happen this year.

“There is always a lot of excitement from people when she is competing,” said Collin. “Her story is getting so well known and everyone really wonders at her survival and current success.”

The charity’s message to others is a plea to rethink our collective use of horses. We need a “life plan” for each and every horse, it says, to ensure that we always know they are happy, healthy, and cared for.

MLHR’s mission is to help society achieve zero tolerance for animal neglect and abuse through its rescue and rehabilitation efforts, and through educating people in animal care.

“We have watched hundreds of horses come into our care from horrific circumstances and in terrible conditions,” Collin said. “To us, it matters not where they came from but who they are themselves, and we love them for their strength and courage.

“To see our beautiful Celeste now, healthy, happy, spirited, and vibrant, fills us with immeasurable joy.”