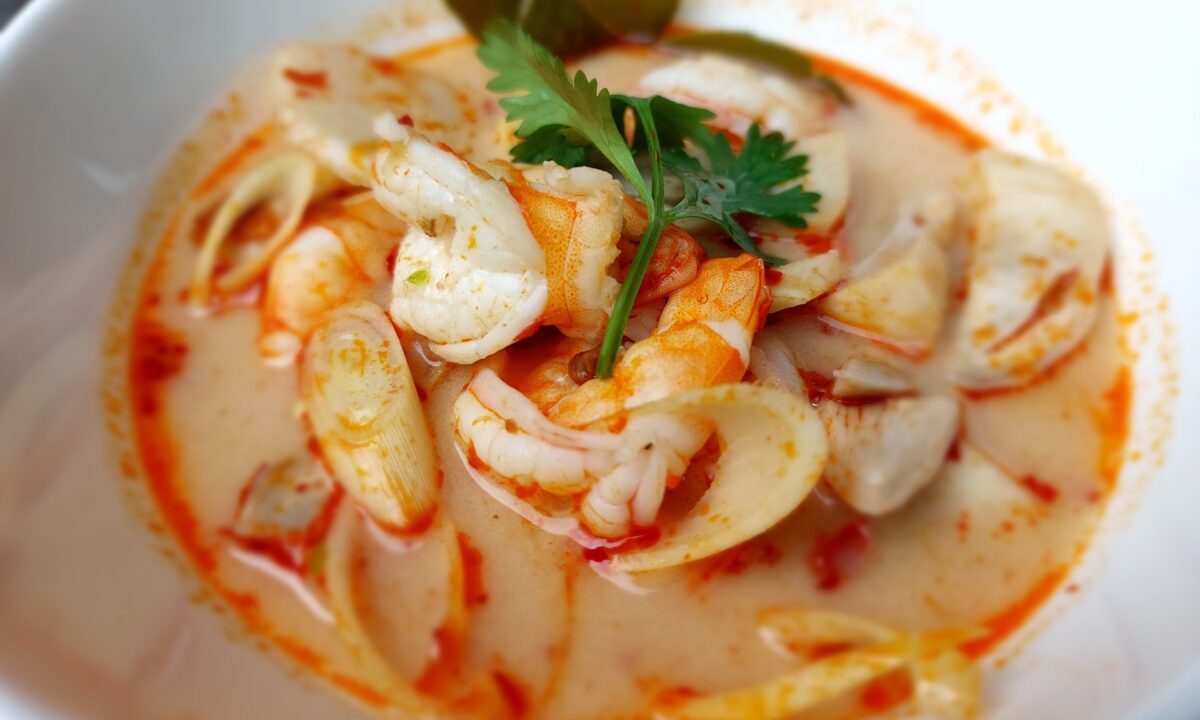 “Thai cuisine is not fixed. You can adjust it any way,” says Ms. Ruchaneevan “Yui” Indragarunwet of Baipai Thai Cooking School in Bangkok. I attended her school to learn how to make one of my favorite Thai dishes: tom yum kung, or hot and sour soup with shrimp.

It’s the national soup of Thailand, but when it comes to making it, methods may vary slightly—as will the transliteration to English (yum or yam, kung or goong). There are even two styles, clear soup and milky, and the shrimp can be swapped for other proteins, such as chicken, fish, pork, and beef. But shrimp reigns supreme.

Yui’s mother and grandmother made it, of course, and now she’s got a cooking school of her own. The property, about a mile north of the famous JJ or Chatuchak Market, is still within the city limits, but the walled-in space has a spacious and glorious garden. There are no sounds of the ubiquitous traffic, only sweet birdsong and the illusion of being out in the country. Amid the lush tropical grounds are also ingredients: lemongrass, makrut lime trees, and galangal. Mango trees sag with the seasonal bounty. In an open-air first-floor space is a test kitchen, with an angled mirror suspended above the teacher’s expansive counter to show attendees what’s going on.

The first three ingredients are critical and don’t have substitutes. None of them will actually be eaten.

“They are important for the smell,” Yui says, and for a moment I wonder if “smell” is a Thai speaker’s not uncommon English translation for “taste.” “No, the aroma,” she says. “Like going to the spa, the smell of the herbs makes you feel fresh.”

She walks through the holy trinity:

Visually it resembles ginger, and it grows similarly as a root. This is for fragrance and a delicate flavor, and there is no substitute. Better to skip it altogether than swap in ginger, which is very distinct and not a good match for the soup.

Waxy and stiff, this lime’s leaves show two together in series on a single stem. Asian grocery stores in the United States often have it, and if you only find it occasionally, stock up—it freezes well. One might think lime juice or zest will substitute, but the flavor is not sour, but rather that incredible citrusy essence without the sour flavor.

This herb is fairly easy to find even in a mass-market grocery store’s produce section. They are often over a foot long, pinky-finger thick, and bundled for sale. You will only need about the first two inches at the bottom, where the flavor dwells, though there is no harm in including some of the material above your cut as long as it isn’t dried out. Peel off the dry outer skin, and slice at an angle to make 1.5-inch pieces. Pound them gently to release more flavor. This provides another lovely citrus essence without acidity.

Then she walks through the rest of the ingredients:

Straw mushrooms are best—fresh, never canned. Fresh oyster mushrooms are a close second. Yui says any white mushroom should work, but avoid the dark ones, such as shiitake, which bring an off smell to the recipe. And honestly, button mushrooms aren’t so great either.

They are different species, but the words often are misapplied. Does it matter? Not really. Sensitive palates may argue the saltwater varieties will have a subtle saltiness that the freshwater ones lack. Unless you are lucky enough to have a fresh seafood market nearby, you are likely going to use frozen. Get the uncooked, shell-on variety. If you are really serious, get them with the heads on. Shells and heads are important for making a rich stock, and the edible orange liquid in the heads gives the soup a flavor boost and some of its orange coloring.

Choose a Thai variety; Vietnamese fish sauce is a bit sweeter and more delicate. I use Squid brand fish sauce. Yui recommends a Thai brand with a little chef with a giant prawn on his back on the label.

If inexperienced with fish sauce, be aware that like Parmesan or other strong-scented products (Limburger, anyone?), what hits the nose may not suggest deliciousness, but it mixes into recipes just fine and adds some key umami to dishes. I even use it now in pasta sauces and other soups. The Romans had their own version of fish sauce. Don’t let my warning make you nervous. I love the stuff.

As with most things, fresh is best. The stuff in jars or bottles is not good here.

The cloudy version of this soup is made not with coconut milk but with evaporated milk—not fresh milk and definitely not thick, sweetened condensed milk. A little 5-ounce can of it is plenty for this project. The Thai use Carnation. For a coconut milk-based soup, check out tom kha.

Made from dried chiles, soybean oil, shallots, garlic, and often dried shrimp, this red paste adds a flavor punch and nice color, especially important if you had no shrimp heads in the broth. Aroy-D brand is good.

Often less than an inch long, these things are dynamite. Start cautiously. Some chefs chop these large, but Yui and I both dice them finely so that no one gets a surprise firecracker in one spoonful. This way the heat spreads throughout the soup as well. Adding more chiles at the end of the cooking works just fine.

Yui’s does not include shallots in her soup, because they add a sweetness she doesn’t like. I am listing that as optional. I like “stuff” in my soup and I’ve had it numerous times in restaurants, but admittedly many online recipes don’t mention it.

This recipe is for a single serving. Yui did not recommend multiplying everything by four for fear of diluting flavor with too much water.

Shrimp shells and heads are important for making a rich stock, but if you don’t want to make it yourself, you can skip the first step of the recipe and just use 1 cup unsalted chicken or vegetable stock instead.

To make the shrimp stock: Peel the shrimp and place only the shells and heads into a soup pot. Sauté them until they start to leave brown traces in the pot. Deglaze with a bit of water, then add another 1 1/2 cup water. Press the heads with a spoon or tongs to release the orange liquid inside, add a pinch of salt, then simmer the stock for about 20 minutes, reducing it to about a cup. (If you aren’t making the shrimp stock, heat 1 cup unsalted chicken or vegetable stock in the pot.)

Cut the lemongrass into 1 1/2-inch pieces, cut 1/8-inch thick slices of galangal, and tear the lime leaves a bit to release more flavor, without actually pulling the pieces off the stem.

Strain the shells and heads from the stock. Add the prepared herbs and diced chiles, and simmer for 10 minutes. Stir in the milk and let cook for 2 minutes, then add the mushroom pieces and shallots, if using, and continue simmering for 2 to 3 more minutes, until the mushrooms are cooked. Stir in the chile paste evenly, and then stir in the evaporated milk.

Don’t add the shrimp until the soup has a full flavor to it. If it doesn’t, keep simmering to let it reduce a bit more before continuing. Add the shrimp, simmer for 2 minutes, then shut off the heat.

Add the fish sauce and lime juice. Adjust according to taste. The flavor should be a fine balance of salty, sour, umami, with a touch of sweetness. Only add the sugar if you feel it needs it. While you will not be eating the galangal, lemongrass, and lime leaves, leave them in as garnish. Ladle into small bowls, garnish with cilantro leaves, and serve with Asian soup spoons and some jasmine rice on the side. Many eaters will take a small spoonful of rice before gathering soup into the spoon.