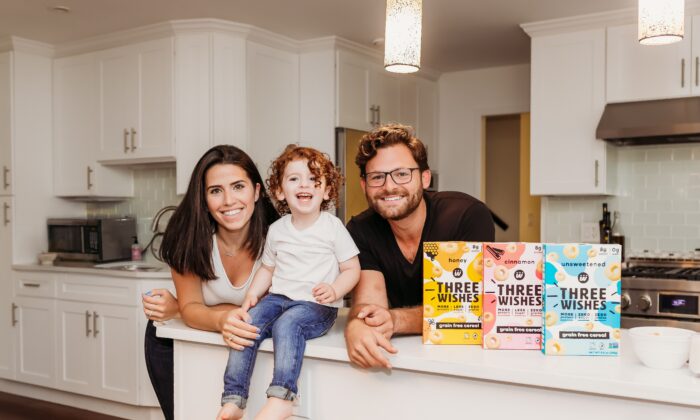 Putting Cereal Back on the Table

Remember cereal? It was supposed to be “part of a healthy breakfast,” and then we all woke up to the fact that it was anything but. Well, Ian and Margaret Wishingrad aim to put cereal back on the table.

Inspired by their young son and the wish to offer him healthy foods, the Wishingrads launched Three Wishes, a low-sugar, high-protein cereal. Made from chickpeas, pea protein, and tapioca, it’s surprisingly crunchy and delicious.

I asked the Wishingrads about their new line of cereal and what launching a start-up as young parents has been like. Here’s what they said.

The Epoch Times: What inspired you to create your own cereal brand?

Margaret Wishingrad: When our son was born, we started to pay a lot more attention to what we (and he) ate. Like any new parent, we also had so little time and needed convenience.

We love cereal. Our kid loves cereal. But the cereals on the market were full of sugar and bad ingredients. So we set out to create a healthy version that we could all enjoy.

The Epoch Times: What were your goals in creating Three Wishes?

Margaret Wishingrad: We wanted to create a cereal so good adults would eat the whole box in one sitting, and parents would have to pull the box away from their kids. More specifically, we set out to create a grain-free cereal made with fewer ingredients than any other product, with lower sugar, more protein, and an incredible taste.

The Epoch Times: What was the process of taking your product from idea to realization like?

Ian Wishingrad: There was no blueprint for us to look at because a cereal like this never existed before. We had to do it all ourselves with a very talented team. It took us over two years to create.

On the brand development side, it was a bit easier for us because there is a real, genuine reason for what we created. This is a brand for families and helping them with the struggles of a crazy life and the demands for being as healthy as possible. We live that every day. We also have advertising and design backgrounds, and had a ton of fun developing the brand.

The Epoch Times: How do you juggle running this business with parenting?

Margaret Wishingrad: We love it. We have always worked together on our businesses and feed off each other. And our son Ellis is also very involved in our business from modeling in photoshoots to tasting every flavor. He’s not afraid to tell us what he likes and what he doesn’t like, so there is no better focus group.

The Epoch Times: What do you plan to do next with Three Wishes?

Margaret Wishingrad: We are just getting started. Our launch on Amazon has been amazing—the #1 new release! And in 2020, we’ll be rolling out nationwide with some major retailers.