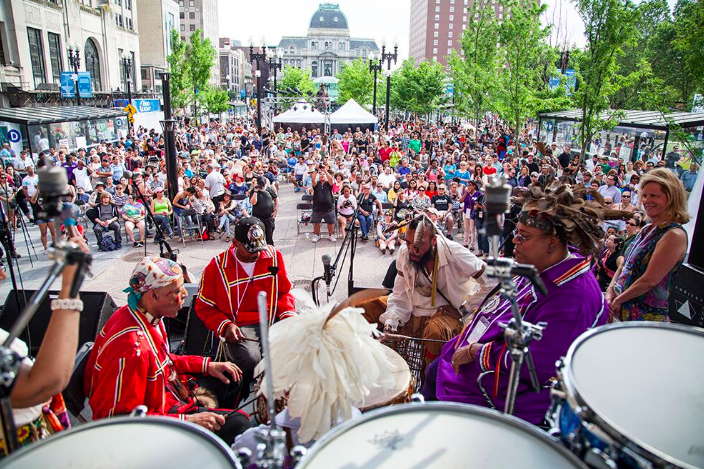 The festival features over 1,000 artists, an ideas festival, and a food village
BY Channaly Philipp TIMEJune 7, 2018 PRINT

Providence, Rhode Island’s signature event, PVDFest, takes over the city from June 7 to 10, shutting down traffic downtown and making way for 1,000 artists to perform. An estimated 75,000 participants have attended PVDFest in the last few years.

“We think of our city as a stage, as a canvas,” said Mayor Jorge Elorza. “We’re putting the artists first and bringing the audience to them.” It’s a homegrown effort—70% of the funds were privately raised this year—and one that brings locals into the street.

“This is unbeatable people-watching. I love the dancing in the street aspect,” said Elorza, who has traditionally led the parade, tambourine in hand.

The free festival will also include an ideas festival, a mini-maker faire, a bike fest, and, to kick things off, a dance that organizers hope will break the Guinness World Record for the most people dancing a choreographed bachata dance.

Providence’s culinary chops will also be on display with a food village as well as 68 restaurants and 28 outdoor bars (because all that dancing is bound to make people hungry and thirsty). Take the mayor’s advice and don’t miss out on Pollo Campero, fried chicken from Guatemala, and Matunuck’s fresh-as-you-can-get oyster bar.  PVDFest.com