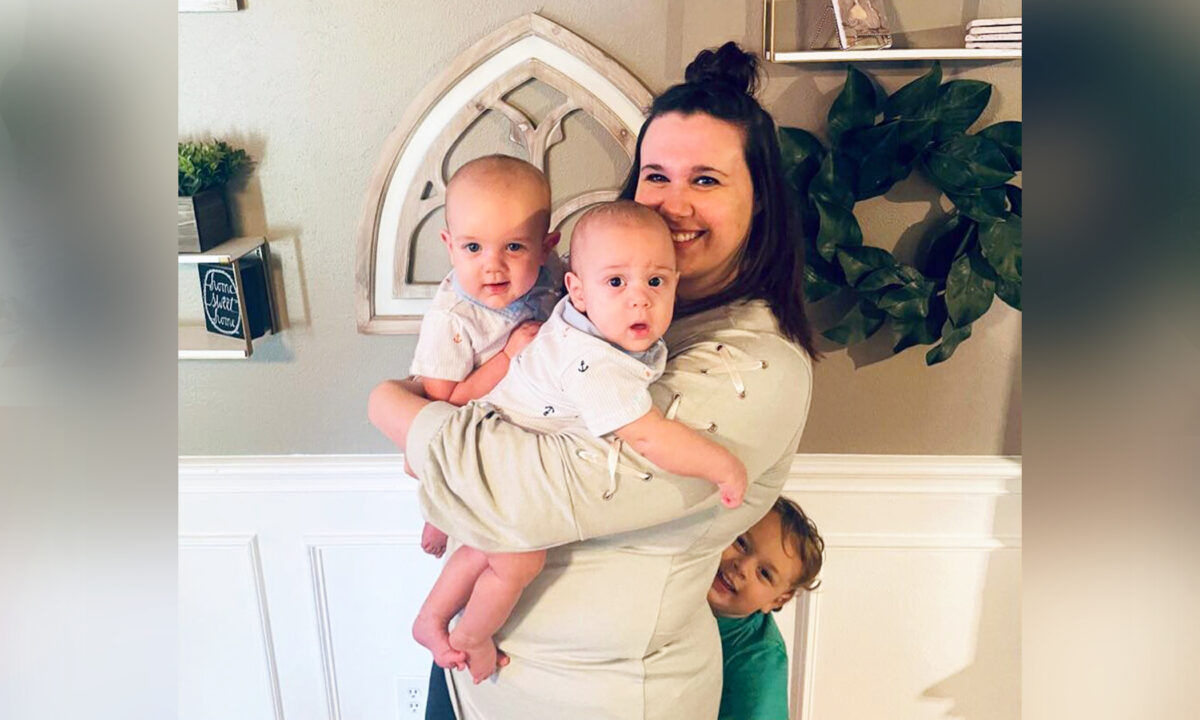 A Texas mom of two miracle babies who were conceived one week apart in a very rare event has shared an update on her boys as they pass the 7-month mark, claiming that they’re such “easy babies” now, despite the rocky start.

“They both start doing things at different times, and it’s usually Cayden first, even though he’s developmentally younger,” Cara, 30, wrote on Facebook. “But Colson is trying to start to crawl and stand while Cayden is just happy rolling everywhere.”

Smiley, sociable Cayden is having fun and speaking his first words, “Mama,” “Dada,” and “Baba,” while serious, cautious Colson “isn’t even interested,” said Cara. Colson “loves to eat and is not picky,” while his brother is content with the bottle.

Cara, who also has a 3-year-old son, Wyatt, with her husband, Blake Winhold, 33, found out she was pregnant in March 2021 after having three devastating miscarriages, with one having been a near-fatal experience for her when she almost bled out as the tissue had gotten stuck in her cervix and she needed two blood transfusions.

Cara underwent emergency surgery during this time in order to save her life. After this experience, she had to go to therapy in order to understand what she had just been through. Needless to say, Cara was afraid to conceive again.

Seven weeks into her pregnancy, in April 2021, she and Blake were told there was a second baby. Cara remembers feeling “happy, scared, and confused” all at once.

“When the tech told us there was another baby, we thought it was a joke at first, and laughed until we saw the super tiny sac up on the screen and heard his heartbeat,” she told Fox 13. “Once they left the room to give my husband and I some time to process, I just remember laying on the table and breaking down in tears.”

Meanwhile, her husband was completely stoic on first learning the news.

“He told me later he was in total shock and all he could think about was, ‘How are we going to do this?‘” Cara said.

Due to the size of the babies’ amniotic sacs, doctors determined they had been conceived one week apart, a phenomenon that can result from a process called superfetation, when a new or second pregnancy occurs during an initial pregnancy. A second egg is fertilized and implanted soon after the first conception, according to Healthline.

These babies are often considered twins, and may be born during the same labor.

“I 100 percent believe it was a miracle, just because of everything that happened in my pregnancy journey,” Cara told Daily Mail. “I like to believe that it was my way of getting back the two babies that I lost and kind of them helping out in a way.

“I can’t think of any other explanation for having twins; it was 100 percent natural, and they don’t run in my family. It was a total surprise.”

Colson and Cayden were born six minutes apart, at 35 weeks and 2 days, on Oct. 25, 2021. Months later, at home in North Richland Hills, Texas, Cara is celebrating her twins’ amazing progress.

While the babies are “fully aware of each other,” 3-year-old Wyatt still amuses his parents by failing to tell his brothers apart.

“Wyatt knows who Cayden is,” wrote Cara. “He thinks they’re both Cayden, actually; he knows there are two babies, but when you ask him what his brothers’ names are, he says ‘Cayden and baby.'”

The close-knit twins “seek each other out when it’s time to sleep,” said Cara. If one is crying, the other comforts him, and they have even started trying to share a pacifier. These sweet, funny moments are a far cry from the heartbreak of Cara’s journey to conceive.

She reflected: “Life is definitely an adventure, and I’m so grateful my job allows me not to miss it!”