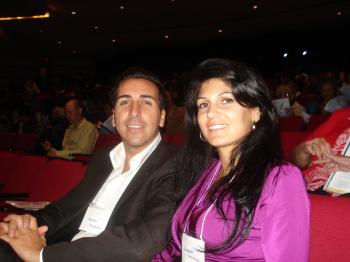 The Mid-Autumn Festival is one of China’s most ancient and cherished holidays. Today, at the John Bassett Theatre in Toronto, a celebration of China’s history came alive with Mid-Autumn Spectacular and Chinese classical dance showcasing authentic and ancient culture.

We caught up with Angela Kalandra, a financial assistant, and Nelson Antunes, director of communications for PeterandPauls.com to find out how they rated the show.

Mr. Antunes said he is taken by the Asian culture.

“I found it very intriguing. My whole life I’ve been into martial arts. I grew up with Bruce Lee. How hospitable they are and how they put meanings to several things. And the way they use universal forces and the way they portray life and the stars and eternal life,” said Mr. Antunes.

Ms. Kalandra said this was her first Chinese show.

But her first impression of the show and the culture was the way it flowed.

She said, “It seems very graceful. It’s bright and happy. I’m drawn to the colors and the dancing. I like the way they dance, the way they flow, they flow beautifully.

“[There’s] a lot of meaning behind it. They really believe in life and doing what is right. A lot of philosophy, a lot of great characteristics with the culture,” she said.

And what were the performances in the show that stood out the most for them?

“I liked the drummers. I liked the whole thing. It woke me up. I felt like I wanted to go up there and start drumming with them,” said Ms. Kalandra.

“The teacup performance was also very good. The balance, the whole act and structure of it was very well put together. Also the tattoo—the whole philosophy behind the tattoo—that whole presentation was also very powerful, very well put together,” said Mr. Antunes. He was referring to the Loyalty of Yue Fei, a great general who put defending his country before his love for his mother.

The Mid-Autumn Festival is one of China’s most ancient and cherished holidays. The Spectacular expresses Chinese classical dance and showcases authentic traditional Chinese culture. Through background scenery, costumes, and choreography, the Spectacular expresses truthfulness, compassion, and pure beauty. China’s history comes to life in this gorgeous performance that is entertaining, inspiring, and uplifting. The show’s content is presented in both Chinese and English.