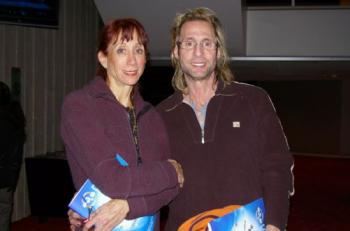 MONTREAL—For the Steinwold’s, one a musician, the other a dancer, Divine Performing Arts’ first show at Montreal's Place des Arts theatre on Friday was a night to remember.

Mr. Steinwold played piano for 25 years before retiring. His wife, Mrs. Steinwold, was a ballet dancer for one of Canada’s top ballet companies and performed for almost as long

“It was a beautiful show,” said Mr. Steinwold, adding that the presenters should be proud.

While Mrs. Steinwold noted that the dance itself was totally different from ballet, she could see that the dancers had a lot of discipline and had worked hard.

“Hours of practice. Hours and hours of rehearsal,” added Mr. Steinwold, who had watched a great deal of dance over the years of seeing his wife and others perform

“Discipline and hard work,” they said together.

Mrs. Steinwold said she was most impressed by how “very very focused,” the dancers were.

“You could feel it from them, every one of them,” she said.

Mr. Steinwold said the difference of the arms in classical Chinese dance compared to the classical European dance really stood out for him.

“If you watch the arms, compared to the classical dance that we’re used to from France and Russia, they’re very, very soft, very gentle. Beautiful, very special ….To see this kind of dance, it’s very beautiful. The costumes, the lighting, the sound, everything is spectacular, and the musicians, the singing … The tenor was fabulous and the soprano, and the baritone, I rarely hear a baritone.”

He said he was impressed by how the costumes worked with the dances, and that he enjoyed the ribbon dancing as well.

She added that she had no idea that traditional Chinese dance included the kind of leaps and flips people normally associate with gymnastics.

Such moves were later taken from Chinese dance and incorporated into gymnastics.

“It doesn’t come from gymnastics, it comes from the dancing, so that is something I learned.”
She also enjoyed the choreography.

“It’s wonderful, the choreography for the music is fabulous, it’s fabulous. The Phoenix was very beautiful. The whole thing was beautiful,” she added.

For millennia the phoenix has been esteemed as sacred, and regarded as the king of all birds. In “The Mystical Phoenix,” the dancers wear long, flowing dresses to express both regality and majesty of this creature through distinctive arm movements and quick, light steps.

“I love the piece with the chopsticks,” she added.

That piece, “Mongolian Chopsticks” shows the vivacity of ethnic dance from China’s hinterlands which bursts forth in the contagiously joyful and festive use of chopsticks by Mongolian women. The charm of the region’s sprawling plains is mirrored by the passionate warmth of the dancers, who use bundles of chopsticks to greet guests.

Mrs. Steinwold said she also enjoyed the variety of dance and how classical Chinese dance makes use of a variety of props.

“The whole production was just very, very professional,” said Mr. Steinwold. “I understand why it’s $200 a ticket,” he said, adding that he had bought some of the best tickets in the house.

“It was well worth it….It costs a lot of money to do a production like that, lots of money. And we’re going to go on their website, we’re going to find out more about them, about the company.”

As a musician, he also commented on one of his favourite musical elements of the show — China’s two-stringed violin, the erhu.

Divine Performing Arts will stage three more shows in Montreal as part of its 2009 World Tour. The first sold-out performance earned a standing ovation on Friday.

The dance company will move on to New York’s famed Radio City Music Hall next.

The Epoch Times is a proud sponsor of Divine Performing Arts.
For more information visit divineperformingarts.org