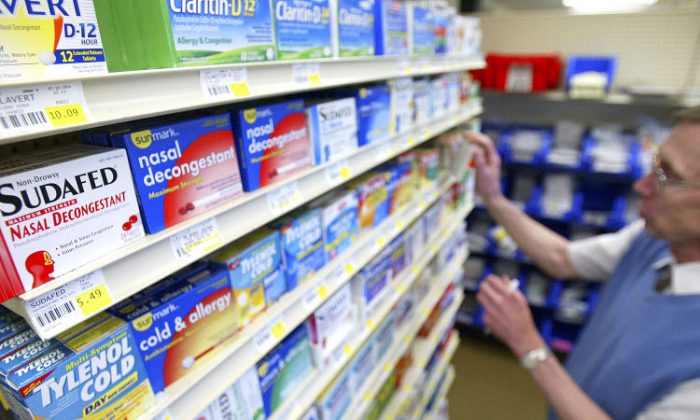 A pharmacist stocks cold medicines at a pharmacy in Milwaukie, Oreg., in this file photo. (Craig Mitchelldyer/Getty Images)
Mind & Body

Methamphetamine (better known as crystal meth) is a highly addictive substance with severe physical and psychological consequences. For more than a decade the drug has ravaged individuals and communities across the country, but some states have been hit particularly hard.

In the 1990s, meth use in Oregon grew rapidly, and after years of government efforts to curb the drug’s availability, state officials were faced with an ever-worsening epidemic. With Oregon law enforcement reporting several hundred meth lab busts annually, in the mid-2000s state lawmakers devised a strategy to restrict the ingredients needed to manufacture the drug.

Unlike many other dangerous illegal drugs, the makings for meth come from common household chemicals. Pseudoephedrine—a primary component in meth production—is also the same ingredient found in over-the-counter cold and allergy medications (such as Sudafed, Claritin D, and others). In 2005 Oregon lawmakers sought to curtail the state’s rampant meth production by making pseudoephedrine products available only by prescription.

While restrictions may be a burden to Oregon’s cold and allergy sufferers, it’s been hard to argue with the significant downturn the state has seen in home-based meth production. According to the state narcotics enforcement, between 2005 and 2010 the number of state lab seizures dropped by 97 percent.

As lab busts fell, authorities applauded the measure, but some still weren’t convinced. Using U.S. Drug Enforcement Agency data from the past few years, the Portland-based Cascade Policy Institute set out to determine whether the mandate was actually as successful as the numbers suggested.

Analysts examined Oregon meth trends and compared them to what was happening in similar states, as well as to trends nationwide. They found that while the number of state meth lab incidents did indeed fall, it had little to do with the prescription requirement, a law that wasn’t enforced until September 2006.

“Ninety percent of that happened before the law took effect,” said Steve Buckstein, a senior policy analyst at Cascade Policy Institute, an Oregon-based think tank that specializes in analysis of state and local issues. “And if you compare the rest of the nation with Oregon, you really can’t tell much difference.”

Buckstein says that about the same time Oregon implemented their prescription mandate, a law at the federal level put cold medication behind the counter across the country, a step that Oregon had already taken in 2004.

“Figure one in our report pretty much says it all,” said Buckstein, referring to a chart of three lines tracing a similar path. “Of all three west coast states, Oregon was the only one that made pseudoephedrine a prescription drug, but all three states had tremendous drops in meth lab incidents from 2004 to 2006. And they continued to go down after that.”

According to the Cascade study, the prescription requirement for pseudoephedrine had no more of an impact on the reduction of meth lab incidents than other measures adopted in neighboring states. Buckstein says all the prescription law did was inconvenience the legitimate buyers of cold and allergy medicine.

“It’s punishing the wrong people, and is actually causing harm to the average consumer,” said Buckstein. “The person who used to be able to go into the drug store and get Sudafed now has to get a prescription. If they don’t do that they may stay home from work with a bad cold, they lose a day’s wages, and their employer loses productivity.”

Oregon was first in prescription only tactics, but other states have since been intrigued by its apparent success. Mississippi and Missouri passed similar laws in 2010, but Buckstein warns other regions not to go down the same road.

“We want this study to tell Oregonians that we tried it, but it didn’t achieve its goal so we’re going to end that experiment,” said Buckstein. “Other states shouldn’t follow our lead.”

Cascade had doubts about the prescription strategy from the beginning, and published two papers detailing their concerns in 2005. Buckstein credits what he calls the Iron Law of Prohibition for the prediction.

“We didn’t know where it would come from, but we knew that somebody would provide the supply if the demand was there. That’s just economics,” said Buckstein. “By making it illegal to do one way, you’re just opening it up to do it another way.”

Although meth production has fallen in Oregon, authorities say the drug is still widely available across the state, and the product is now stronger than ever. Buckstein explains that when the home-based meth cooks went down, enterprising Mexican super labs took over. As a result, the drug is now made in huge quantities, in very sophisticated laboratories, and in much greater purity and concentration than was seen with local manufacturers.

“Obviously nobody wanted these home grown meth labs around, but we should have known before they started dropping significantly that the law of prohibition would go into effect,” said Buckstein.

It may be some time before Oregon lawmakers consider the Cascade analysis—the state’s legislative session will end next week and attention is currently focused on balancing the budget. But Buckstein expects the study will have an impact. He says it raises fundamental questions about the law’s effectiveness, and directly challenges whether a mandate that affects everyone is really warranted.

“We hope to have the Legislature look at it when the session ends in 2013 or sooner,” he said. “The data seems pretty clear.”