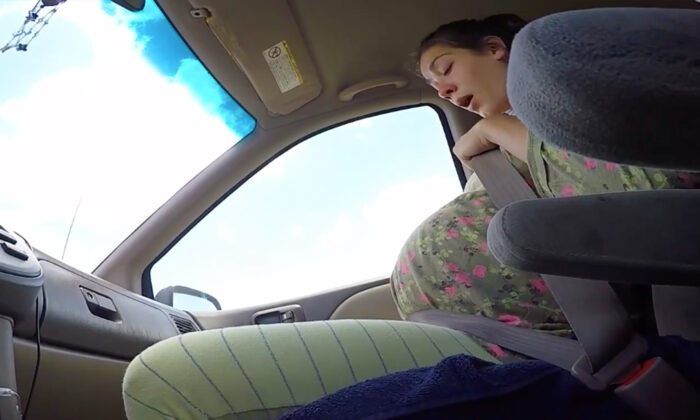 A couple, Jonathan and Lesia Pettijohn were pregnant with their third child in July 2015 and were heading toward the birthing center. However, 45 minutes into the drive, the expectant mom knew she was going to give birth soon. An incredible 4-minute clip has captured the mom going from contractions to her water breaking, and finally giving birth to a 10-pound 3-ounce (approx. 4.5-kilogram) baby in the seat of a car.

According to The Daily Mail, the pregnant mom told her husband to start recording the birth once she realized that the little baby would pop out before the couple would make it to the Bay Area Birth Center in Houston, Texas.

As the couple was racing out along the Beltway 8, the then-nervous mom-to-be is heard saying, “I feel his head just down below.” To which Jonathan reassuringly replied, “At least his head is in the right position.”

However, within seconds, Lesia is seen moaning in pain and agony before finally announcing that her water has just broken. Her husband offers to stop the car, but the mom-to-be tells him she’s still unsure what to do. “I don’t know if I can do it!”

“I was probably freaking out way more than I should have. But I really didn’t want to have him in the car. I was scared. I didn’t know if he’d be breathing OK or if he would need anything else,” Lesia recalled, according to KTRK.

The video then showed Lesia screaming louder, to which the soon-to-be dad removed her seatbelt and helped her pull down her pants. Within moments of that, Lesia gave birth to her baby boy, Josiah.

“When he was out, I was like I gotta push the rest of him out and grab him and pick him up, and I was like what do I do, what do I wrap him in? My shirt is pretty long I will wrap him up in that,” Lesia said.

Remaining as calm as before, Jonathan stopped the car only to giggle and say, “We had a baby.” Sitting on Lesia’s lap, the video shows a perfectly healthy crying newborn.

“He’s crying, he’s breathing just fine,” the happy husband assured, as Lesia held the baby, worrying that he needed to be “suctioned.” Jonathan then instructed Lesia to hold the crying newborn upside down and “pat him” on the back. “Oh my gosh, we just had a baby in the car,” the dazed new mother exclaimed. However, her husband seemed completely calm and happy.

Jonathan admitted to KTRK that although they wanted to give birth naturally and this was not how they had planned the birth of their baby, he knew at that moment that he had to just keep his wife calm. “[M]e getting all worked up isn’t going to help her any,” he said.

Additionally, the father also said, “He came really quick. With our other two, it took more than an hour after the water broke.”

After about 15 minutes of giving birth, the parents arrived at the birthing center. Upon the couple’s arrival, the midwives quickly stepped up and cared for Lesia and her newborn baby, Josiah, and both the mother and baby were said to be perfectly healthy, according to Jukin media.

Most people would wonder why Jonathan did not just stop the car and call someone, to which the father said: “For one thing, we don’t have a cell phone with service, so we couldn’t have called anyone if I would’ve pulled over. Number two, she said she wanted me to keep driving.”

The birth of little Josiah became an internet sensation amassing over 65 million views to date. Responding to his viral fame, Lesia said, “I can’t believe so many people want to see something like that.”

As Lesia later reflected on the whole incident, she said, according to the March 2019 issue of Heartfelt Magazine, “During this strange and scary incident I realized that, even when things don’t go as planned, the Lord has His own plans and they are good.”

Since Josiah’s birth in 2015, Jonathan and Lesia’s family has expanded. The parents welcomed their daughter Arwen in December 2016 and son Judah in May 2018.