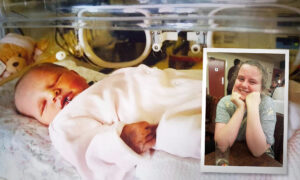 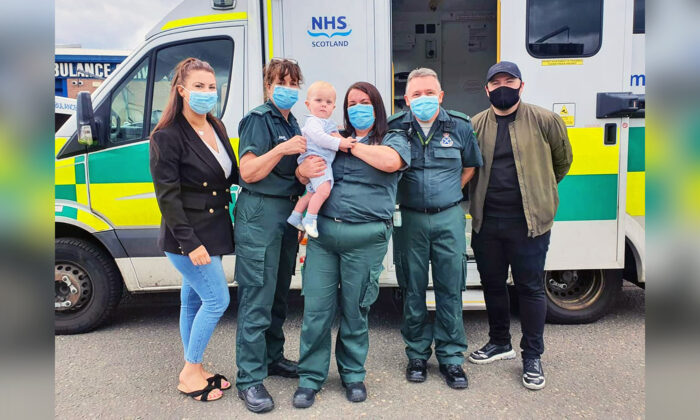 The family of a baby boy who survived a dramatic premature birth had an emotional reunion with the three paramedics who saved his life more than a year ago.

Mom Gemma Maxwell of Glasgow in Scotland, who organized the reunion, was moved to tears upon meeting the medics who saved her now-15-month-old baby, Finlay. Thanks to their timely response, the toddler is a happy, healthy baby who now weighs 22 pounds (10 kg), 10 times the 1 pound 13 ounces (822 grams) he weighed at birth.

“All I have thought for the last 15 months is, ‘What do you say to the people who have saved your baby’s life?'” Gemma, 29, told BBC News. “I think we absolutely had to do this so I could process that morning and say, thank you. It was healing.”

It was just five days before the United Kingdom lockdown in March 2020 when Gemma, who was 26 weeks pregnant, went into labor unexpectedly. She had felt unwell the evening prior to her birth and asked her mother to spend the night with her.

“In the morning I felt a rush of really bad pain, my waters broke, and we called an ambulance,” she recalled.

Gemma’s mother, with guidance from paramedics over the phone, helped deliver her grandson—who weighed less than a bag of sugar—in the living room. About 30 seconds later, paramedics arrived.

Response paramedic Sheila Parr, who arrived at the same time as ambulance paramedics Harry Trodden and Nikki Wilson, saw Gemma on the floor against the sofa with a “blue and floppy” baby in her arms, and the newborn wasn’t crying.

Trodden immediately leaped into action, cutting the cord and making sure Gemma was stable, then running to the ambulance to start CPR on the premature baby, who was barely breathing on his own.

“The heart was barely beating, and it was a long eight minutes to the hospital,” Trodden said.

Due to Finlay’s size, Trodden had to administer CPR using just two fingers so as to not damage his underdeveloped lungs. Even the smallest oxygen mask was too big for the tiny baby.

Wilson, who was driving, had only returned to work two months prior after having had her own baby. She admitted that her heart was in her mouth, but upon reaching the hospital, Finlay started to “pink up,” said Trodden.

A week later, Wilson found out that Finlay was doing well in the NICU. He was discharged after spending 11 weeks in the hospital.

Finlay’s father, 30-year-old Niall Mackenzie, admitted he was “on a different planet” during the chaos of his son’s premature birth. “If it wasn’t for the crew, he wouldn’t have made it,” he marveled, speaking to the Scottish Ambulance Service. “They are all amazing.”

Gemma still doesn’t remember much about the day her son was born. However, she was able to put pieces together upon reuniting with Parr, Trodden, and Wilson.

“Now that things are getting back to normal now, we were able to track them down,” Gemma told Glasgow Live. “I think they needed it too, as they said they often don’t get to hear the other side after finishing a job, and with someone born at 26 weeks it’s not always the best outcome.”

The paramedics arrived at the June 15 reunion at the Glasgow East Ambulance Station bearing gifts for Finlay—including a model ambulance and paramedic’s helmet—delighted to meet the thriving toddler for the second time.

Parr told the BBC she felt empowered by the experience. “I have been a paramedic for 20 years and this is one of the most memorable cases,” she reflected.

Finlay, said Gemma, is doing amazingly despite his rocky start in life. She hopes that sharing their story will help other parents going through a similar experience realize they’re not alone.