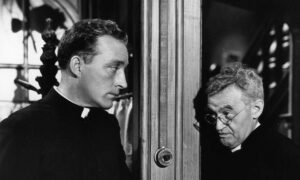 Popcorn & Inspiration: ‘Going My Way’ From 1944: Faith From the Emerald Isle
0

Popcorn and Inspiration: ‘Force 10 From Navarone’: An Inspiring Mission to Save Lives

When Great Britain’s military high command taps Major Mallory (Robert Shaw) and his friend Sergeant Miller (Edward Fox) for a top-secret mission to take out their old enemy, German spy Nicolai (Franco Nero), they don’t hesitate to take the job. “Force 10 From Navarone,” directed by Guy Hamilton (of James Bond 007 fame), is all about revenge as Mallory and Miller were betrayed by Nicolai in the film’s 1961 predecessor, “The Guns of Navarone.”

The duo soon learns that Nicolai is hiding out in war-ravaged Yugoslavia (the film takes place during World War II) and that getting to him won’t be an easy task. Therefore, their superiors team them up with Lieutenant Colonel Barnsby (Harrison Ford), who leads a Special Ops unit (the titular “Force 10”), which will afford them the best opportunity to get their shot (pun intended). Mallory and Miller reluctantly join Force 10.

Unfortunately, Barnsby isn’t too keen on having to escort the relatively older Mallory and Miller overseas either. He feels that the two will only be a drag on the Force 10 mission: to blow up a bridge. The bridge in question is a critical piece of real estate. The Germans plan to use it to reach a populated Yugoslavian region, and thereby kill a lot of innocent civilians. So, the men are in a race against time in order to destroy the bridge.

Not surprisingly, Force 10 and their two escortees spring into action right away. As they sneak aboard a clandestine plane to fly to Yugoslavia, they are discovered by a detachment of military police who are on their own escort mission: transporting a prisoner, Sergeant Weaver (Carl Weathers). After some feral fisticuffs, the MPs are overcome and Weaver inadvertently joins the Spec Ops unit. He literally jumps into their plane as it’s taking off, rather than answering to authorities.

Their rocky start gives way to more bad news when they get spotted by some German fighter planes and are shot down over a Yugoslavian forest. Most of the unit is killed, but Mallory, Miller, Barnsby, Weaver, and a young lieutenant named Reynolds (Angus MacInnes) barely manage to survive.

Soon after, they briefly team up with what they think is a group of Yugoslavian partisans (rebels who are resisting the Nazis), including the towering Captain Drazak (Richard Kiel) and Maritza (Barbara Bach). But it isn’t long before the now five-man Force 10 discovers that the fighters are actually Chetniks—Yugoslavian Nazi collaborators. Force 10 is captured by the Chetniks but later manages to escape.

Force 10 eventually manages to locate both the bridge and their ever-scheming quarry, Nicolai, who is posing as a partisan fighter in Yugoslavia under the alias of Captain Lescovar. Lescovar’s direct superior, Major Petrovich (Alan Badel), tells the men of Force 10 that a spy was discovered and disposed of months earlier, but Mallory has his doubts since the person he suspects to be Nicolai is standing right next to Petrovich.

As Miller is Force 10’s demolitions expert, he surmises that the explosives on hand won’t be enough to destroy the bridge, but if he can get to a dam upriver, he’s almost certain that he’ll be able to blow that up. The resulting surge of water should take out the bridge.

Most of the film is chock-full of tension as Force 10 races against time to get the bridge destroyed, without being discovered and killed by the Germans. There are also some double-crossings on display as Nicolai (as Lescovar) attempts to betray Force 10, but luckily there aren’t any half-baked romantic subplots, which seem to be par for the course with these types of movies.

The film’s peppy screenplay pairs well with Hamilton’s able direction, and most of the dialogue-heavy scenes seem inspired, if a bit casual here and there. This is a lighter-toned film than “The Guns of Navarone,” which had Gregory Peck and David Niven starring as Mallory and Miller, respectively.

The action choreography is also done well, and the film’s various set pieces look convincing. This movie was made back before digital effects, so miniature models were used for many of the larger structures, such as the bridge and the dam (in the destruction sequences), and for the most part, they’re impressive-looking.

Overall, “Force 10 From Navarone” is a rousing, action-packed war drama that is a fun and inspiring. It portrays a small unit of men, which despite tremendous odds against them, attempt to save thousands of innocent Yugoslavians from German liquidation.