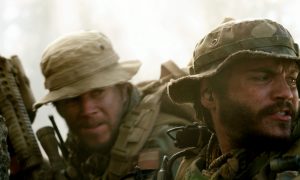 Boal and Bigelow’s exhaustive slicing and dicing of details ensures that the tale they’re telling feels rock solid. Working from declassified files, public records, and interviews, Boal’s journalistic background is palpable. But, this being a screenplay, he also ramps up the engaging storytelling aspect. The result is riveting.

That said, reigning agency director Michael Morell wrote to CIA personnel: “The film takes significant artistic license, while portraying itself as being historically accurate. What I want you to know is that ‘Zero Dark Thirty’ is a dramatization, not a realistic portrayal of the facts.” What else would a CIA director say? That’s their job.

The above refers to the film’s treatment of how information was squeezed out of al-Qaida detainees at CIA black sites via “enhanced interrogation,” which includes starvation, stress postures, waterboarding, and locking prisoners in tiny cages.

Maya is visibly rattled by the interrogation process, in stark contrast to seasoned, thoroughly desensitized colleague Dan (Jason Clarke), who brings new meaning to the phrase “not afraid to get one’s hands dirty.” This is best illustrated when he allows a small caged monkey to grab a scoop of his ice cream cone with its filthy paws, and then absent-mindedly licks it himself.

Maya, however, starts to rethink the whole process, especially when it becomes apparent that one detainee will say whatever he thinks they want to hear, to avoid the pain. She convinces Dan that empathy with the prisoner might actually get better results. Which it ultimately does.

Maya then begins putting together these various puzzle pieces that eventually lead to Abu Ahmed—bin Laden’s most-trusted courier. As she begins to home in on her main target, Maya runs into endless setbacks and delays by agency bureaucracy and collegial skepticism, as well as ending up, herself, on the al-Qaida hit list.

Whether the torture portion of the film is truth or fiction, we civilians may never know. Suffice to say, when it comes to extracting truth in an “enhanced” fashion, one imagines that in war things often need expediting, which brings to mind the phrase “All is fair in love and war.” Also, “where there’s smoke there’s fire,” and there’s a lot of smoke around this particular topic.

The climactic SEAL Team Six raid is remarkably high-strung with tension, even though we already know the outcome. If you’re not familiar with the story, after watching the movie, I recommend Robert O’Neill’s book, “The Operator: Firing the Shots That Killed Osama bin Laden.” While it’s an engaging read and O’Neill is quite funny, there still seems to be lingering controversy as to whether or not he fired the actual shots.

“Zero Dark Thirty” is really best viewed as eye-opening transparency in regard to the inner workings of how the Central Intelligence Agency dealt with one of America’s most crippling blows. This is not flashy Hollywood entertainment such as the recent treatment of Tom Clancy’s “Without Remorse.” This is memorable cinema, grounded in earnestness, respect, and painstaking integrity by filmmakers who hope to shed light on the matter.

What stands out the most (in addition to Jessica Chastain’s brilliant performance) is the portrait of the normally mildly maligned (also often portrayed as supremely sneaky and up to no good) CIA—as a bastion of patriotism. Intelligence gathering is, after all, the head that directs the limbs (the military) to carry out missions. It’s conjecture, then, to extrapolate that since spying is in and of itself intensely devious, it therefore attracts a particular kind of colder, more ruthless patriot. After all, the professions of warrior, spy, and assassin are all linked, and all are war-fighting elements. But “Zero Dark Thirty” restores faith that we’re all on the same page when it comes to defending our nation.

As for what Chastain pulls off acting-wise, she manages to make Maya—who is exceedingly mule-headed and not an inherently likeable individual—likeable. One gains immediate respect for her talent, integrity, and determination, and her outsized chutzpah is also endearing. When asked by the CIA director (James Gandolfini) who she is (since she piped up in a meeting of clearly much more important people), she replies “I’m the (expletive) who found this place, sir!” The director, charmed, seeks her out at lunch and tells her that she has a flair for the work.

When lightly challenged by a pair of powerful, experienced SEALs, she responds: “Listen—I didn’t even want to use you guys, with your dip and your Velcro and your gear and your (expletive)! I wanted to drop a bomb. … He’s there. And you’re going to kill him for me.” And they immediately find her to be excellent and a little bit adorable.

“Zero Dark Thirty” is a painstaking, journalistic portrait of the events, as mentioned. It’s one of the great cinematic procedurals—but also a gripping thriller of the highest caliber.

The film doesn’t do a victory dance over bin Laden’s death, and no one is more conflicted in the end than Maya, who spent 10 years hyperfocused in search of a symbol. When the actual, pathetic, frail human is finally dispatched and Maya heads home, sitting alone on the giant, empty, military transport plane, the pilot remarks, “You must be pretty important.” Then you can see the weight of the inner conflict settle on her. Because after a decade of incredible effort and strain, none of the violence of humans has been alleviated whatsoever.

This Memorial Day 2021, if you watch “Zero Dark Thirty,” keep in mind that there’s a designated wall located at the main entrance of the CIA’s headquarters, which was created in 1974. It displays a star for each agency member who died in the line of duty. Spanning the CIA’s 72-year history, there are now 130 stars, honoring the CIA’s continuing fight to help keep America safe and free.