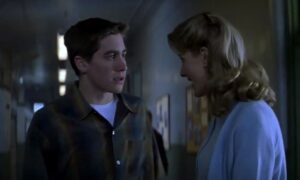 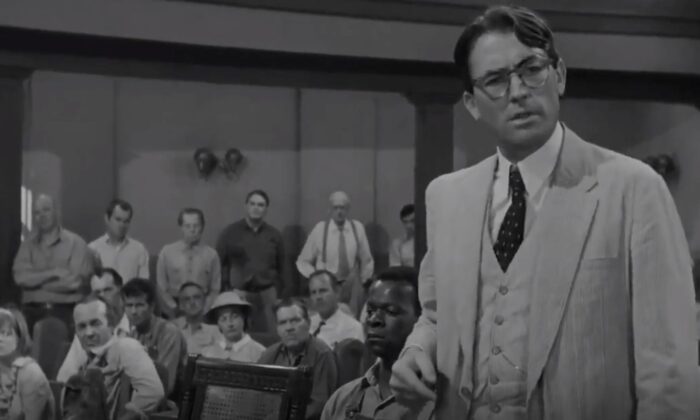 Lawyer Atticus Finch (Gregory Peck) handles the most challenging case of his career, in "To Kill a Mockingbird." (Universal Pictures)
Film Reviews

Popcorn and Inspiration: ‘To Kill a Mockingbird’: An Uplifting Tale About Racial Injustice

Directed by Robert Mulligan (“Summer of ’42,” 1971; “The Other,” 1972), “To Kill a Mockingbird” is a 1962 film based on a 1960 book of the same name, written by award-winning American author Harper Lee.  Elements in the book and film parallel aspects of Lee’s younger years, although we now know that the book is more fiction than autobiographical account. But irrespective of how close the novel is to real-life events, the tale still shows the value of standing up to injustice.

The film opens in the small, fictional town of Maycomb, Alabama. A lawyer of goodwill, Atticus Finch (Gregory Peck) is going about his morning routine when a local farmer, Walter Cunningham (Crahan Denton), shows up to deliver a sack of chestnuts to him, albeit clandestinely.

Atticus’s young, precocious daughter Jean Louise (Mary Badham), nicknamed “Scout,” insists that she alert her father to the delivery. Cunningham is visibly pained when he hands the bag over to Atticus. When the farmer leaves, Atticus asks Scout not to notify him of Cunningham’s future arrivals; since the chestnuts are a way of paying off his legal debt, and because Cunningham has no money, forcing him to face Atticus shames the farmer.

It is here that we first get a gander at Atticus’s incredible thoughtfulness and compassion, as well as the hard times of the period in which the film is set (1933–1935), in the aftermath of the stock market crash of 1929.

Through these children, we are gradually introduced to the town and its goings-on. Also through them, we learn of a subplot involving a strange, reclusive young man who lives down the street, named Arthur “Boo” Radley (Robert Duvall).

Soon, we discover more about the legal case that Atticus has taken on. Robinson has been accused of brutally raping a young woman named Mayella Ewell (Collin Wilcox Paxton), despite evidence to the contrary.

Atticus is increasingly harassed not only by the Ewells’ oft-drunken and menacing patriarch, Bob (James Anderson), but other townsfolk as well. Atticus’s willingness to defend a black man in the segregated South isn’t exactly popular.

Throughout, the Finch family’s home life is detailed, and we learn that compassion, justice, and standing up for what’s right are beliefs that Atticus holds dear and, therefore, reinforces in his children. It is also revealed that his dear wife passed away at some point in the past. The family’s kind-but-stern black maid, Calpurnia (Estelle Evans), has taken over as a surrogate mother to the kids, even chastising Scout for some misdeeds in order to rein in the child’s feisty nature.

Things heat up midway through the film. In one of its most dramatic scenes, Atticus stands guard overnight in front of the town jail, which is housing Robinson. He is protecting the suspect from being lynched. Lo and behold, a large posse shows up to administer what they consider to be vigilante justice. Atticus bravely stands defiant in the face of their threats, but it looks like the mob will not be deterred from their form of “justice.”

Just when things seem to be going south (no pun intended), Scout suddenly appears. The kids had gotten wind that Atticus might be in trouble and had gone to the jail. Scout notices the farmer Cunningham among the mob and naively reminds him of the way Atticus generously handled his legal fees. Cunningham calls off the mob just in the nick of time.

When Robinson’s trial is underway, we see glimpses of how segregation worked back in the day. Black folks have to swelter in the top loft of the courthouse, while whites sit in the cooler main area downstairs.

Eventually, a central question emerges, for all of his kindness and compassion: Will Atticus prevail in defending a wrongfully accused, poor black man in the racially divided South?

First of all, even as a fan of Gregory Peck, I must say that this has to be one of his finest performances. His righteous demeanor and unwillingness to stand down in the face of racism are displayed with utmost skill not only in his character’s subtle gestures but also his facial expressions. Child actors Badham and Alford are also convincing as his two children, Scout and Jem, respectively.

Through this film, we get a lens into what it was like in the racially charged South of yore when blacks often ended up on the wrong side of both lynch mobs and racial inequality in general. “To Kill a Mockingbird” is a fantastic cinematic adaptation of Lee’s Pulitzer Prize-winning novel and, ultimately, an uplifting yet cautionary tale about judging others based on differences.