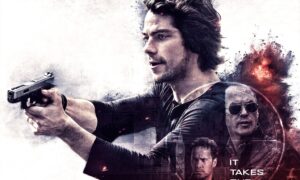 “The World’s Fastest Indian” is not about Native-American Olympic gold medalist Jim Thorpe, but about the Indian motorcycle that set the world land speed record (for bikes with engines under 1,000 cubic centimeters) at the world’s fastest speedway—Utah’s Bonneville Salt Flats.

And it’s not really about that 1920 Indian motorcycle either, because by the time the bike got to Utah, it had been souped-up, retooled, jacked-up, rebuilt, and tinkered into a two-wheeled hot rod of such epic, rocket-like demeanor that it could no longer really be called an Indian.

No, 2005’s very fun “The World’s Fastest Indian” is about New Zealand national hero Burt Munro, who set that world land speed record of 200-plus miles per hour … wait for it … in his mid-60s.

And here’s the other thing: When I say muscled-up, you picture something like a shiny, neon-colored, nitro-burning, top-fuel-drag-racing funny car; every inch covered with endorsement decals.

No. We’re talkin’ a rickety-looking, decrepit, antediluvian thing held together with proverbial spit and baling wire. It’s even got a wine cork as a gas tank cap. If that bike could talk, it would tell a heck of story. Here it is.

A quick Hopkins anecdote: As a young man, Anthony Hopkins (known to most Americans as Dr. Hannibal Lecter in “Silence of the Lambs”) auditioned for Britain’s National Theatre in front of its founder—the greatest stage actor in history—Laurence Olivier. Olivier was currently in repertory, playing the lead in Shakespeare’s “Othello.” What role did Hopkins audition with? Othello. Said Olivier later, “The nerve! Cheeky (expletive omitted).” Hopkins was thusly accepted into London’s most prestigious theater.

Hopkins portrays Burt Munro as an eccentric old coot living in a cinder-block shack in Invercargill, at the southern tip of New Zealand, where he keeps chickens and mows his lawn by sprinkling it with gasoline and throwing in a lit match. His shed is littered with shelves of worn-out pistons and other motorcycle detritus that he manually manufactured. It also contains the love of his life—that 1920 Indian Scout.

Tom, a young lad (Aaron Murphy), lives next door to Burt. He’s got overprotective, nervous-Nelly parents. Tom knows a manly, mentoring elder when he sees one and spends as much time as he can with the very entertaining Burt, learning all about motorcycle engines and other excellent man-boy stuff like how to water one’s bushes in the manner of dogs watering fire hydrants.

Burt goes on a date, gets challenged by the local motorcycle gang youth to a race, and nearly beats the pants off them in a well-attended beach race (lots of bets are placed) except his straight-ahead-designed rocket-bike doesn’t turn too good and can’t quite navigate the pylon indicating the turnaround point.

Eventually Burt knows he’s gotta follow his bliss and live his dream, and so off he goes on a cargo ship to America. Never having cooked for multiple people before, he earns his keep as the galley’s head chef. And while he’s beloved in his neighborhood, and his friends (including the previously hostile biker boys) put up the money for him to take the trip, they never believe for two seconds that he’d stand a snowball’s chance in hell, mixing it up on the world-class racing stage in the USA.

And so in 1962, at age 63, Burt arrives in Los Angeles. And immediately the very gullible, very naïve Mr. Munro is swindled right and left by con artist-piranhas, used-car salesmen, street hookers, and so on. But he blithely coasts right through the riffraff, cheerfully dispensing old-codger admonitions, such as “Smoking is bad for you, you know?!”

Also, the heavily made-up receptionist at his cheap motel takes a shine to him since he’s always gallantly calling her “my girl.” Tina the receptionist treats Burt to a diner breakfast, and eventually and demurely admits, “I’m not a girl. I’m a boy.” To which Burt, with typical, blithe largesse replies, “Oh, ha, I thought there was something a little odd about you, but you’re still a sweetheart.” Everybody loves Burt.

Did I mention that Burt has a bad ticker? Oh yes. He’s always on the verge of an actual heart attack, but he’s not about to let a little thing like that stop him. His girlfriend (Annie Whittle) back in Invercargill manages to get hold of a bottle of nitroglycerin pills, and Burt views this whole heart-attack situation much as he does using a wine cork for a gas cap—whatever gets the job done.

Burt makes it to Bonneville! Whereupon he’s promptly informed that he needed to have pre-registered (he had no clue), and furthermore his insane bike doesn’t meet the safety requirements by a million miles. What to do? Will Burt’s charm sway the balance? You betcha.

In a scene reminiscent of “The Right Stuff” (where legendary test pilot Chuck Yeager breaks his ribs horseback riding the night before a major test flight, and gets a mechanic to jury-rig a broom handle thingamabob so he can wang the plane door shut with one arm without the authorities noticing that he’s in no condition to fly)—Burt notices at high speeds that the bike’s exhaust is … a tad toasty.

So Burt wraps his leg with asbestos (that’ll fix it!), but then he can’t fit his leg inside the streamlined exoshell of the bike. Asbestos be darned—and Burt’s leg ends up looking like a well-done rib-eye steak, but guess whether or not that concerns the old Kiwi?

While motorcycle aficionados might have preferred more garage engine-tinkering, Hopkins and director Donaldson have really made the story more about the character’s curious blend of provincial Kiwi innocence combined with world-class ambition.

Burt doesn’t open up about his life’s vision until he’s standing on the edge of the impressive salt flats, far away from his small-town crowd. They’d have undoubtedly pulled his escaping crab back into the crab bucket had he really given them to understand that he always knew, deep down, he had what it took to compete at the very top level. “All my life I’ve wanted to do something big. Something bigger than the other jokers.”

The real Munro set his final record in 1967, when he was 68. That’s a real hero’s journey: setting out into the unknown with a mission, vision, dream, passion, and infectious happiness.