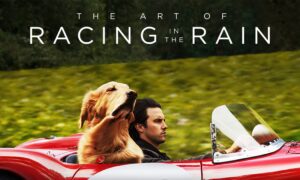 Popcorn & Inspiration: ‘The Art of Racing in the Rain’: A Cosmic Canine and Life Lessons
0
Share Now
TelegramFacebookTweetEmailTellMeWeReddit
Copy Link 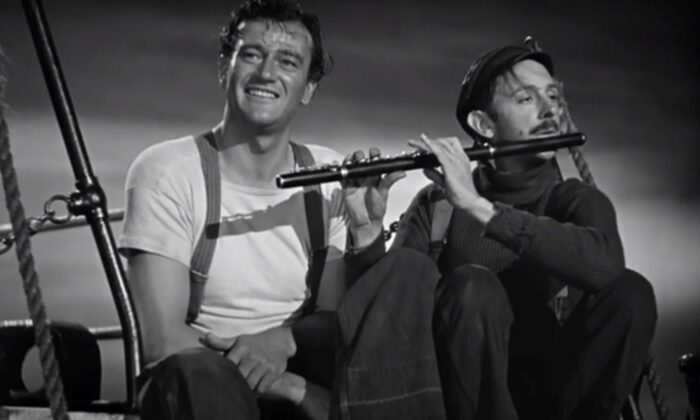 The sea can offer many things. Whether for civilians or those enlisted in military service, shipping off to ports of call can be an adventure, with long voyages to distant, exotic locales. For others, it can be a means to escape problems or burdens on the home front.

One thing that separates military naval personnel from civilian mariners, besides the obvious differences in discipline, is that when a naval ship pulls into a port, sailors might get a little leave time, and then they have to report back to their ship. But when it comes to civilian crews, personnel can pull into port, get their pay for services rendered, and disappear.

Directed by John Ford during the height of his career, “The Long Voyage Home” tells the tale of one civilian ship and crew—in this case, the crew of an English tramp freighter, the Glencairn. This movie is based on four one-act plays by playwright Eugene O’Neill: “Bound East for Cardiff,” “In the Zone,” “The Long Voyage Home,” and “The Moon of the Caribbees.”

The film opens with the Glencairn and its crew as they travel through the Caribbean Islands. The ship is to pick up some important cargo from the West Indies and transport it back to England as World War II looms on the horizon. On board the aging freighter is a disparate, international cadre of deckhands, including Ole Olsen (John Wayne affecting a decent Swedish accent), a Swedish country bumpkin; Axel (John Qualen), Ole’s fellow Scandinavian and friend; Driscoll (Thomas Mitchell), a hard-drinking and fighting Irishman; Smitty (Ian Hunter), a constantly ruminating Englishman; and Donkeyman (Arthur Shields), the ship’s resident philosopher.

During the first act, we see that the men, however different, have formed strong bonds. The ship’s captain seems to realize that this particular crew can be rowdy at times and, as such, had forbidden them from going ashore. But when Driscoll (the crew’s de facto leader) arranges to have a small boatload of native ladies, exotic foods, and liquor board the ship—the captain eases up and allows his men to have a little fun.

However, the crew sees an inch and takes a nautical mile. Soon, they proceed to swill as much booze as they can get their hands on, crudely engage the women, and become more and more belligerent as the night goes on. Not surprisingly, the festivities devolve into a mass drunken brawl where many of the men take to slugging their friends just for the fun of it.

But we also get the first inkling as to how much Ole is protected by the crew: When he reaches for a bottle, Axel chides him for even considering a drink from it.

To many of the men, Ole represents innocence. Although the Swede is tall and strong, he’s also gentle and naïve. And although he’s simple-minded, the crew accepts Ole because of his straightforwardness and dependability. For example, when Driscoll returns from some fisticuffs with some of the locals (after sneaking off-ship), Ole straightens out some of the pugilistic Irishman’s injured fingers. Another time, Ole carries a drunken Smitty safely back to their quarters, where he deposits the Englishman into his bunk.

Eventually, the men make it to England. Although they’ve agreed to get Ole safely back home to his family in Sweden, they can’t resist the allure of having one final party at a local bar. Once again, as the other men proceed to get drunk and rowdy, they make sure not to allow Ole to drink in order to protect him from becoming drunks like them. But when several scurrilous figures enact devious machinations around Ole, the crew’s guardianship is put to the test.

Although I’ve heard that this film had a gloomy tone, I didn’t find much of that at all. Besides the brooding Englishman Smitty, the characters seemed to be living like anyone would when far away from home—sometimes homesick, but other times full of a lust for life and adventure.

If one thing is underscored in the film, it is the men’s real sense of camaraderie and companionship. By the end of “The Long Voyage Home,” it is evident that these disparate characters looked out for one another no matter the circumstances, and that’s a tremendously positive message.