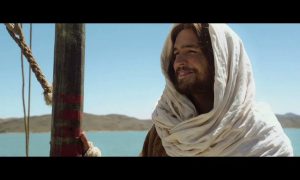 Popcorn and Inspiration: ‘Small Group the Movie’: A Spy in the House of Love

Faith-based movies like “Small Group the Movie” are becoming more prevalent in America. Amid COVID and election-fraud dark times—is it any wonder? People are looking for answers. They’re searching for faith, in the hopes that it’s not just some random universe out there with seemingly random laws that we’ve had the misfortune of falling into.

Some Christian movies have been major hits, but most play to a dedicated fan base that doesn’t stress overly much about low production values, as their faith is already strong. “Small Group the Movie” isn’t as in-your-face as many examples of the genre, and that’s its strength. Less is more.

The movie kicks off telling the story of Georgia-born documentary filmmaker Scott Cooper (Sterling Hurst), who’s been hired by film producer (and former professor at Scott’s alma mater film school) (Robert Riechel Jr.) to go undercover and infiltrate Southern American Christian culture and spy on them with some James Bond spy-cam glasses. Never mind the fact that this sort of “Punk’d”-type hidden-camera ruse, in that context, is probably illegal six ways to Sunday; it does make for an interesting premise.

Scott’s mission, should he choose to take it, is to dig up dirt on the current state of Christians, which will hopefully yield a scathing exposé of a variety of hidden bad behaviors, and demonstrate to the world the hypocrisy of these so-called faithful. Clearly the producer, played to sweaty, slimy, chews-with-his-mouth-open, unctuous perfection (actually to the point of caricature) by Riechel, is carrying a major grudge, but we never find out why.

So Scott, a live-and-let-live agnostic, has his qualms about his artistic and moral integrity immediately quashed by said conniving producer, who reminds him that he’s now under contract. And Scott also realizes that he can’t back out anyway because he’s broke—Scott and his wife, Mary (Emily Dunlop), move from California back to Scott’s native Atlanta.

Once ensconced in their new home, the Coopers are immediately culture-shocked by their stereotypically redneck-y (also to the point of caricature), apparently dumb-as-a-post, chaw-spitting biker neighbor (Caleb Hoffmann), who invites Scott to go shooting at the local range where they’ve got excellent new targets that look like “Obama bin Laden.”

Scott goes to church, and he’s immediately not loving the come-to-Jesus arm-waving lady next to him, who’s so transported she smushes his James Bond glasses with her hands. He’s at a loss as to where to begin shooting footage.

After a few “Goldilocks and the Three Bears” church visits, they finally find one that’s jusssst right: It’s got “small groups.” A “small group” is a smaller church group that hangs out together for fellowship, study, and sharing; the men go male-bonding camping, the women support each other, and so on. Perfect! Let the sleuthing begin.

Shane Baxter (Matt Chastain, the movie’s writer and director) plays the member of the small group who invites Scott and Mary in. He’s funny and delightfully irreverent to an almost shocking degree, which strongly balances the fervor of most of the other members who would normally be perceived as overly zealous by non-Christians.

“Small Group” proceeds as a mildly light comedy until Scott gets invited to Guatemala with a number of the other men, on a mission of compassion in conjunction with Engadi Ministries, run by Sam Channell (Nelson Bonilla).

This is a program intent on saving male youth from the otherwise inevitable, inescapable Guatemalan street gang culture, and it would appear that actual local gang members were recruited to play themselves. It would also appear from the density of the tattoos that it’s most likely the notorious Mara Salvatrucha (MS-13) gang that originated in Los Angeles to protect Salvadorans, because El Salvador is only about 300 miles south of Guatemala.

It gets quite dangerous; there’s a brief but shocking pedophile sex-trafficking moment, a near execution, and some serious pistol-whipping—all of which ground the film in admirable ways. And by that I mean any lingering tinge of the Joel Osteen-glitz variety that non-Christians tend to associate with Christian films and be allergic to is erased by Christian good deeds that obviously take raw courage.

Once Scott’s devious ulterior motive comes to light, his new friends register a range of emotions spanning shock, disgust, vitriolic righteous indignation, raw animosity, betrayal, deep hurt, and combinations of all of the above.

And it’s this major conflict that you sense coming, from a long distance out, and start to slowly and inwardly cringe in anticipation of. You develop affection for these people and don’t want to see them get hurt. For me, it almost ruined the entire experience; it’s quite a long period of dissonance to tolerate, waiting for the resolution.

That said, forgiveness is a major Christian focus. Does our somewhat hapless antihero, Scott, have a character arc? Does he change? Does he embrace his lost faith? Does a certain very annoying character emerge as a heroic, two-tours-in-Iraq war vet and medic?

Let’s just say that the main message of “Small Group” is to try to avoid judging people until you really make an effort to get to know them. As messages go, it really doesn’t get much better than that.

Moreover, underlying that, one might draw comfort from extrapolating that this seemingly random universe at its core might hold deep meaning, exquisite organization, innocence, curiosity, a core of goodness, and the ability to positively resolve all apparent dissonance. One might only need to spend time getting to know it better before judging it as random.