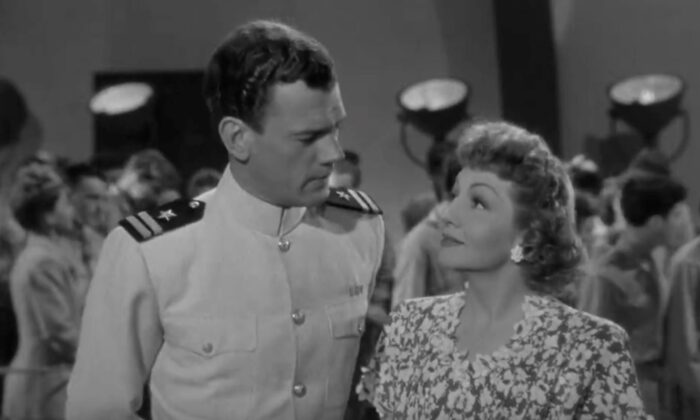 Popcorn and Inspiration: ‘Since You Went Away’: Life on the Homefront During World War II

I’ve always found it interesting to look at movies that offer alternative perspectives to the straight-line affairs of their genre. World War II films are a case in point. In 1946’s “The Best Years of Our Lives,” for example, we don’t see military men fighting it out on foreign soil, but three veterans as they come back home to the United States. An earlier film, titled “Since You Went Away,” gives us yet another spin on how World War II affected folks on the homefront.

“Since You Went Away” was produced in 1944 while the war was still underway. This multifaceted, episodic-drama film by uber-producer David O. Selznick (here also screenwriter) and director John Cromwell is studded with both established and budding stars. It reminds us of how different things used to be.

After the Hilton family’s patriarch, Tim, goes off to serve his country as an officer in the U.S. Army, he leaves a vacuum in the lives of his family members. Wife Anne (Claudette Colbert) and the couple’s two teenage daughters, Jane (Jennifer Jones) and Brig (Shirley Temple), are saddened by Tim’s abrupt departure. Anne is the most affected but presents a strong façade, hiding her tears whenever her girls are around.

While Tim was a successful advertising man before joining up, his military pay means that the family’s upper-middle-class lifestyle can’t be maintained. Their large Midwestern home soon becomes a financial burden, and Anne must do some belt-tightening, which includes rationing food and laying off their loyal maid Fidelia (Hattie McDaniel). She also puts out an ad for a boarder to rent Tim and Anne’s bedroom—preferably to an officer.

When an older gentleman shows up in civilian clothes and wearing a lengthy beard, Anne thinks he’s made a mistake. But the man assures her that he is a retired colonel by the name of William Smollett (Monty Woolley). William is a rather stuffy old fellow, but Brig’s infectious, cheery nature and sly sense of humor begin to thaw him out of his self-imposed igloo.

Tim’s good friend Lt. Tony Willett (Joseph Cotten), who was the best man at the Hiltons’ wedding, drops by. Through his flirtatious behavior with Anne, we discover that he’s always had a crush on her, despite being her husband’s pal. It’s all pretty light and playful stuff, though, and Anne doesn’t seem to mind. She considers him to be a mostly stand-up guy, who signed up for the Navy to fulfill his patriotic duty.

Meanwhile, Anne’s teenage daughter Jane blushes whenever Tony’s around, although he would never take advantage of her crush. Anne’s hoity-toity friend Emily Hawkins (Agnes Moorehead) is also enamored of Tony. But whereas Anne is wholesome, loving, and good-hearted, Emily is her opposite—condescending, prissy, and making no effort to help the war effort.

Another interesting subplot involves Cpl. Bill Smollett (Robert Walker), who pops up while on leave to visit his grandfather, Col. Smollett. While Bill desperately seeks his grandfather’s love and acceptance (his father has passed away), the colonel acts coldly toward him.

Women on the Homefront

Perhaps because of its domestic setting and lack of action, the film plays out in an episodic, almost soap opera-ish fashion. And, as with “The Best Years of Our Lives,” “Since You Went Away” is another long film that almost cracks the three-hour mark, yet neither film ever feels drawn out or overly long. If anything, I wish “Since” would have taken the serial TV route so that we could enjoy the well-paced and well-written narrative, with all of its intricate parts and fantastic acting performances.

While the supposed strong women in many of today’s films overemphasize women acting like men in order to be perceived as tough, the great Claudette Colbert’s depiction of Anne shows us where real feminine strength lies. Anne is emblematic of the days of yore: a loyal and dutiful housewife who struggles valiantly to keep her offspring safe and secure, all the while balancing a multitude of complex relations with disparate personalities. Yet she somehow has the wherewithal to hold it all together.

As the yule logs burning at the beginning of the movie symbolize, she keeps the fire burning on the homefront.