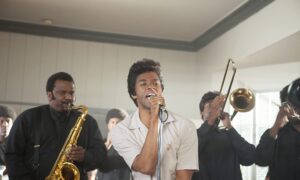 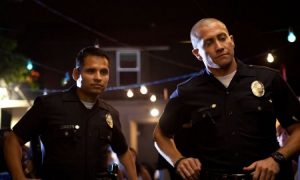 Popcorn and Inspiration: 'End of Watch': It's Time for Some Cop-Appreciation
0
Film Reviews

I have zero sense of direction. The Waze app is the most important feature on my motorcycle—I absolutely love that woman in my headphones, who tells me where to go. Google Maps was one of the most welcomed pieces of technology in my life.

“Lion” is the true story of a 5-year-old foundling Indian boy who gets tragically lost and separated from his village, and who, 25 years later, locates his mother via Google Earth.

One night, Saroo convinces Guddu to let him take a train ride with him to a distant worksite. Guddu says no, but Saroo is very determined. However, being only 5, Saroo needs more sleep than both he and Guddu bargained for.

Guddu leaves Saroo temporarily asleep on a train platform bench, but Saroo, in a sleep daze, leaves his bench and falls back asleep on the much more comfortable seat in a nearby train that has its doors open. Little Saroo wakes up thousands of miles from home.

The days-long train ride comes to a stop in Calcutta, where Saroo is unable to speak the local dialect and ends up a street urchin. Having no food, he picks through trash. Finding a spoon, he sits outside restaurants, mimicking people eating soup, with his little spoon. Imaginary food is his only sustenance. These are some of the most profoundly sad scenes in recent movie history.

He narrowly avoids local child-traffickers who kidnap homeless children hanging around the transit system. He also flees from the “kind” woman who lures him with orange soda, detaining him long enough to be cursorily inspected by a slimy local pedophile who basically licks his chops and promises to return later. Eventually Saroo is placed in an orphanage, where he is adopted by a wealthy Australian couple in Tasmania (Nicole Kidman and David Wenham).

The grad-school-age Saroo (Dev Patel) is grown, grateful, and seemingly well-adjusted, and in a good relationship with a classmate (Rooney Mara).

One day at a party, Saroo wanders into the kitchen of an Indian classmate and finds a piece of indigenous Indian food that awakens a childhood memory, which instantaneously regresses him to age 5.

“I’m lost,” he says to his girlfriend. His story pours out at the party to concerned friends, and they tell him about Google Maps. He realizes that he has an unquenchable need to find his family.

Saroo uses Google Earth on his computer, makes many train-speed calculations on paper, draws lots of circles and arrows, and nearly drives himself mad trying to re-create his journey on that long-ago fateful train ride.

In the end, only after he’s thrown up his hands in failure do luck and intuition (and perhaps a bit of divine intervention) guide his eyes on the computer screen to the remote area of India containing the village whose name he no longer knows, but whose footpaths he can still walk in his mind. The ensuing mother and child reunion will drain your tear ducts for the next six months.

And not only did he not know the name of his village, but it turns out that he didn’t even know his own name. To say his true name would be a spoiler. But it’s hiding in plain sight.

“Lion” will most likely go down in history as the patron-saint movie of all people who’ve been lovingly adopted. It captures the horror, danger, loneliness, and vast existential meaninglessness encountered by lost children in such a powerful way that I remembered that 20 years ago, I used to take part in a program to read bedtime stories to homeless children. It also brought a sense of shame that I stopped going because the agency was so disorganized. There’s nothing more heart-wrenching than little homeless children.

A recent companion to “Lion” is “Runner.” See both of these true stories and, if you haven’t already, please consider doing something for the ongoing plight of homeless children, especially in this day and age when child and sex-trafficking is ramping up at an unimaginable rate.