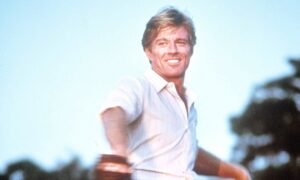 Popcorn and Inspiration: ‘In the Line of Fire’: Assassin’s Revenge Versus Secret Service Redemption

When aging Secret Service agent Frank Horrigan (Clint Eastwood), in rooftop pursuit, jumps to another roof in 1993’s “In the Line of Fire,” he narrowly avoids a death-fall into the alley.

These two central characters, with their recurring (rotary) phone calls, are the two pillars upon which “In the Line of Fire” rests: Mitch taunting Frank and rubbing salt in his formidable psychological wounds (in his earlier career, Frank failed to save JFK in Dallas in ’63), while Frank tries to keep Mitch on the phone long enough to be traced by the FBI.

To get the ball rolling, Frank and his new younger partner Al (Dylan McDermott) do some very dicey undercover work, which ends up with Al strapped to a chair with a plastic bag over his head. Frank proves that, although he may be old and politically incorrect, he’s Cool Hand Luke under fire. Or, more appropriately, Dirty Harry.

Al, on the other hand, is a hot mess; he’s rattled, he sniffles, he doubts his ability to be a good agent. Frank tells him to buck up and learn to use the word “cockamamie” in a sentence; it’s a word Al’s generation hasn’t embraced yet. He should keep it alive.

It’s now 1992, the presidential election machine is ramped up, and embittered Mitch Leary is going president hunting. As mentioned, this is no amateur “Soldier of Fortune”-reading, video-game-playing recluse, but a stone-cold ex-CIA black ops agent so vicious that even one of his former CIA colleagues refers to him as a predator.

Mitch has a date with death, as he tells Frank, and since this assassination will be Mitch’s magnum opus, he leaves clues for Frank to follow. And so, because he’s a master spy and could kill Frank at any time, the roles of who’s the cat and who’s the mouse become blurred. As Mitch says, he’s on offense and Frank’s on defense. It’s a classic sports match-up in a sense—the best of the best going up against each other.

We see Mitch at work at his craft, concocting in his lab, pouring liquid epoxy into molds, calibrating, filing, and putting the finishing touches on a metal-detector-defeating plastic gun, replete with a hollow rabbit’s foot keychain fob. It holds the metal bullets that, sleight-of-hand-wise, don’t get noticed going around the metal detector, while the plastic gun isn’t noticed going through it.

We see Mitch test his gun on two yokel duck hunters. We see Mitch inadvertently expose a gap in his cover story to a bank clerk, and, meticulous about loose ends, he follows her home and murders her and her roommate.

Clint is vintage Clint with all his Clintisms here, and that almost always means quality. But Malkovich was nominated by seven different award associations for Best Supporting Actor.

A great stage actor, Malkovich plays Mitch like a fallen angel who cartwheeled into the lowest pits of hell, and while he sees the glory of his former military and patriotic honor reflected in Frank, he wonders about Frank’s demons. He queries in a taunting manner, but it’s clear he’s looking for coping clues and probably fishing for tidbits of wisdom from a fellow traveler of sorts, as to where the entrance for the path to redemption can be found.

Mitch’s profound sense of betrayal stemming from the CIA’s sending his best friend and comrade in arms to Mitch’s home to kill him is extremely palpable. But will he find redemption? Or will Frank redeem his own failure to protect President Kennedy?

There’s a romantic subplot between Frank and fellow agent Lilly Raines (Rene Russo), which has a similar paradoxical feel to the killer-protector relationship: She’s much younger than Frank, but functions as older by way of her mothering, nurturing nature. She’s also more grounded professionally by dint of the fact that she’s young, hungry, in a leadership position, and squared away in terms of technology. Frank’s sociologically, culturally, and technologically a bit of a dinosaur.

Speaking of dinosaurs, Frank’s pickup lines regarding Lilly were already clunky and almost unbearably chauvinistic (even though it’s all said in jest) 27 years ago. Now, it’s laughable.

But while the dating stuff is dated, the movie’s traditional values concerning classic first-responder, law enforcement, military, and Secret Service/FBI/CIA-agent hero-types who dutifully put their lives on the line for patriotism is timeless. “In the Line of Fire” is a top-notch thriller that remains, almost 30 years later, one of the best examples of the genre.