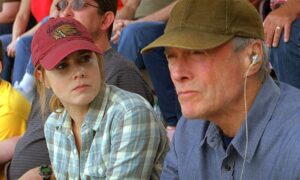 Popcorn and Inspiration: ‘Field of Dreams’: Ease Your Pain

In 1989, “Field of Dreams” was nominated for three Oscars. It resonated so powerfully with people wishing for a return to simpler, more innocent times, traditional values, as well as confirmation that time-space portals, parallel dimensions, clairvoyance, karma, virtue (good karma), and destiny exist—that the actual movie-set field in Iowa became a major tourist attraction. They built it, and people came.

If You Build It, He Will Come

Ray Kinsella, a rookie farmer, lives with wife Annie (Amy Madigan) and daughter Karin (Gaby Hoffmann) in the coziest house ever, in a sea of green Iowan corn.

Ray tells the audience about his rocky relationship with his now-deceased dad, John Kinsella, a devoted worshiper at the church of baseball.

One dusk, while walking through his green-corn sea, Ray hears a voice (Ed Harris) whispering, “If you build it, he will come.” Ray’s like, “What? Huh?” and then he suddenly has a precognitive vision of a baseball field, out on the edge of his cornfield, replete with stadium lights. Ray figures he oughta build that field.

Annie is slightly skeptical about Ray’s apparent craziness, but gives him her blessing anyway, pounding nails alongside him in a show of spousal-bleacher-carpentry support, and happily tolerating Ray’s never-ending rant about Shoeless Joe Jackson, a long-dead baseball star idolized by Ray’s long-dead dad.

Time passes, the field just sits there, nobody comes, and Ray’s family farm faces foreclosure. Ray built it, and “he,” whoever he is, did not come.

Then one day, wee daughter Karin sees a baseball man out on the field. Who might he be? Shoeless Joe (Ray Liotta)—Ray’s whole family can see him.

Joe, the baseball spirit, is ecstatic to be able to experience the essence of baseball again, as he hits Ray’s pitching. He later returns with seven other ballplayers—the rest of the ghosts of the players banned in the 1919 Black Sox World Series scandal.

Mark, Ray’s brother-in-law (Timothy Busfield), a very sensible man concerned with bill-paying and imminent foreclosures and such, doesn’t have his third eye open and can’t see the other-dimensional ballplayers, and harps endlessly that Ray’ll go bankrupt unless he immediately quits all this nonsense.

Meanwhile, Ray, out in his field again, hears that voice say something new; this time it’s “Ease his pain.” And Ray’s all like, “What? What pain? Whose pain??”

Then, attending the local PTA meeting, spunky Annie calls out another wife for a round of fisticuffs for insisting the school ban some of her favorite books—those of radical author Terence Mann. Ray remembers reading those books himself. He puts two and two together: The field-whisperer has to be talking about this man, er, Mann.

So Ray does research, turning up a magazine article where Mann admitted that as a kid, he dreamed of playing for the Brooklyn Dodgers. Hmm … would it ease Mann’s pain if he got his dream?

So Ray drives from Iowa to Boston (!) to try and drag Mann (James Earl Jones) to a game at Fenway Park, hoping something revelatory will happen there. And lo, the field-whisperer obviously stowed away in Ray’s van, because the voice is there at the ball game and says, “Go the distance.” You can imagine Ray’s reaction.

At the game, both Ray and Terence have the same vision about a player named Archie Graham, a former New York Giant who only got to play one game in 1922—and so off they drive to Minnesota (!) to interview him, only to discover that Dr. Graham died a few years before.

However, Ray has a “Back to the Future” moment; now he time-travels back to 1972 and runs into Doc Graham (Burt Lancaster), who explains that while he thoroughly enjoys his medical career, his dream was always to stare down a Major League pitcher in the exquisite moment of sublime baseball-ness. And annoy that pitcher by winking at him. And he never got a chance to step to the plate.

So Ray says, “I know a place where things like that happen and if you wanna go, I can take you.” Doc declines.

Ray’s confused. Terence explains that if Doc had winked at that pitcher and actually hit a home run, he would never have become a doctor and benefited all those small-town people who adored him.

But the fact is, Doc Graham had a dream. Remember dreams? This is a movie about dreams. That’s why they call it “Field of Dreams.”

So Ray and Terence drive back to Iowa, picking up a hitchhiker along the way, because as Ray says, “I need all the karma I can get right now.” Ray means “good karma,” not karma, but let’s not quibble about spiritual semantics.

Back at Ray’s farm, more baseball players’ spirits have come out of the cornfield—now there are two teams. And guess who the hitchhiker is, who finally gets to step to the plate and take a swing (and a wink)?

The movie winds down. Terence exits via the cornfield time-space portal. Shoeless Joe, before leaving, reminds Ray about “If you build it, he will come,” and also “Ease his pain.”

Whereupon the catcher takes off his mask … and guess who it is? For the one percent of the American population that hasn’t seen this movie, I’ll not spoil the ending—but this is the part that always makes grown men cry.

And as we, the audience, depart the dimension where this story is told, we see a long string of headlights—thousands of cars headed toward the Field of Dreams. Why? Ray built it and we came. We’d like to see. Or at least believe. It’ll ease our pain. This actually happened. And cars are still streaming to the Field of Dreams,  even as we speak.