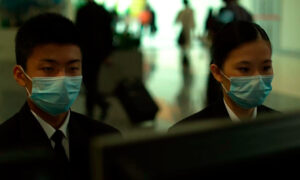 “Clear and Present Danger” (1994) starring Harrison Ford would be an appropriate title for just about everything in 2020. This year is turning out to be quite a dangerous year, what with COVID-19, the excruciating dearth of toilet paper, Marxist-instigated riots, and murder hornets.

This film, which is Ford’s last appearance as Jack Ryan in the Tom Clancy-penned series, has a strong whiff of danger; it’s almost 2.5 hours long but the action is so compelling, you don’t notice the time. The only slow thing is the early-1990s computer technology.

Its immediate predecessor was “Patriot Games,” and “Clear and Present Danger” is about the games played in Washington D.C.’s corridors of power, by so-called patriots.

Jack’s a rookie, very green; the CIA and White House power-play piranhas size him up, seeking to outmaneuver him immediately.

Jack’s first item of business is to handle the drug cartel execution of an American family aboard their yacht. Turns out this family were also close personal friends of the U.S. president (Donald Moffat). Further complicating matters is the fact that the family appear to have been in cahoots with the cartel that killed them.

Jack, at first wide-eyed and flattered when the president speaks words he suggested on national TV, soon begins to get the hang of the White House mental chess game (with coaching from Greer’s hospital bed).

Once inserted, they immediately start blowing up subterranean cocaine labs, and calling in the above-mentioned murder Hornet bomb strike—which is supposed to look like a car bombing. Immediate retribution for the yacht murders.

Jack Takes Off the Gloves

Prior to the U.S. covert military team eventually getting pinned down by enemy fire in the jungle with no rescue forthcoming (because the POTUS would like the whole headache to just “go away”), Jack’s mostly involved in dealing with the extremely sneaky Robert Ritter.

Jack orders a kid from the White House equivalent of Best Buy’s Geek Squad to hack Ritter’s computer. Once Jack gets in, he ends up in a race to download Ritter’s files onto floppy disks and print them, while Ritter tries to delete them, all while small-talking about how they got off on the wrong foot and should have a tennis match. The technology is now laughable, but the scene remains surprisingly potent.

Then, needing to monitor the situation in Colombia, Jack, along with CIA and Secret Service personnel, winds up in an electrifying motorcade ambush that was probably the forerunner of the powerful ambush of the CIA by the MS-13 gang scene, in 2015’s “Sicario.”

This is good, solid, stolid, earnest Ford, who, since carpentry was his day job for years, knows how to assist all his directors in crafting scenes to be more dynamic.

Ford’s best moment arrives at the movie’s end, when his character faces down the president with threats to go to the press, and the president says that none of that will happen because he’ll wheel, deal, and dance what he calls “the Potomac two-step.” To which Jack Ryan replies, “Sorry, Mr. President. I don’t dance.”

Clearly, the fictitious Bennett administration was a swamp that needed draining. It’s inspiring that Jack Ryan had the courage to blow the whistle and pull the plug.