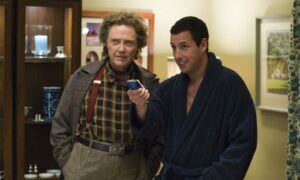 Fifty years ago, the Apollo 13 flight on April 11, 1970, was no longer interesting to the public. The USA had already won the space race with the Soviets and put a man on the moon. The TV networks didn’t even bother to broadcast the event.

Soon, like flies on roadkill, here comes the media trying to get comfortable on her front lawn in order to better film the Grim Reaper should he come a-calling. She’s not having it.

This suspenseful, true story of the entire NASA team of rocket scientists attempting to coach three astronauts back from the dark side of the moon is a nail-biter, and watching it in 2020 is a chance to gawk in amazement at how antiquated all the cutting-edge technology of the period looks.

There’s some fun movie-cronyism here: Ed Harris was in the major rocket movie of the previous decade, “The Right Stuff” (1983). Heck, there’s a lot of just plain cronyism here too: Hanks is reunited with “Forrest Gump” buddy Gary Sinise; and director Ron Howard, Joe Spano (who plays the NASA director), and Kathleen Quinlan all got their start together in “American Graffiti.”

Ridiculously close to liftoff, one well-oiled cog in the rocket flight team, Ken Mattingly (Gary Sinise), is pulled by NASA for having come into contact with the measles. Mattingly’s replacement, Jack Swigert, has only two days to get with the program. Two days! One appreciates why astronauts had to have top-flight fighter-pilot backgrounds, and “the right stuff” (cool heads, gumption, and a lack of claustrophobia) needed for tricky maneuvers using late-1960s technology, in cramped spaces, while flying.

Off they go! On route to the moon, their module suffers an explosion: An oxygen tank ruptures, ripping off one of the spacecraft’s sides, but the astronauts don’t know exactly what’s wrong, which leads to Hanks’s delivery of Lovell’s famous line, “Houston, we have a problem.”

Our boys’ bitter disappointment at realizing that they’ve lost their shot at a moon landing soon gives away to the horrifying realization that they stand an excellent chance of never returning to planet Earth, and “Apollo 13” sustains suspense throughout its entire length—and it’s a long film.

Philip Kaufman’s “The Right Stuff” (based on author Tom Wolfe’s book of the same name) put the heretofore little-known, secretive military culture that obscured the iconic heroism of U.S. fighter pilots on the map, thereby magnifying the glory of the NASA space program. This exposure of Navy fighter-jock derring-do, in particular, eventually led to the megahit “Top Gun.”

Ron Howard’s let’s-hang-out-in-the-capsule-with-the-boys, pop-entertainment thriller, on the other hand, focuses on vulnerability, human foibles, and the eye-popping degree to which Mr. Murphy (of Murphy’s Law) is actually in charge.

But this film is truly a tribute to the all-American values of tenacity, teamwork, ingenuity, and—as is the case for all teams on dangerous missions—selflessness and brotherhood.

Director Howard takes the potentially highly boring, static setting of three fellows stuck in a tin can and makes it crackle with action and nail-bitery, primarily by keeping the fears of the astronauts directly linked to the fears, hopes, and prayers of their desk-riding tech coaches, and their writhing-in-inner-anguish relatives.

One high point (pun intended) is the realism and authenticity of seeing the actors actually float in the spaceship, which was realized by flying the entire film crew, sets, and actors up in a NASA plane, on an arc that provided short periods of weightlessness, sort of like the initial plunge of a roller coaster.

What’s really brought into stark contrast, however, is science versus faith. At one point, Lovell is required to calibrate coordinates so the capsule won’t either burn up on reentry or go skipping off the Earth’s atmosphere, never to return. Immediately it’s “Ground Control to Major Tom” for confirmation, and we see the earthbound math whizzes attacking the problem with slide rules.

It’s insane that we humans tried to land on the moon with such caveman technology. But my point is, on the one hand, we see primitive tech, and on the other we see lots of prayer. And due to our current ability to recognize how primitive all that so-called advanced 1970 rocket science was (they boast of a computer that fits into an entire room, with less computing power than a smartphone), from the 2020 perspective, the two modes of belief don’t look all that dissimilar.

The end of “Apollo 13” is an invitation to explore the heavens more. Prayer is already good to go, but clearly, we need better science for that. How do we achieve that? We might start by refocusing our science in the way the ancients did—by elevating their moral stature.

Imagine for a minute that the white rocket and white spacesuits don’t refer to American racism, but instead, recast that whiteness as a metaphor for purity of soul. Without getting into specifics in a movie review, that’s the human starting point for a new science that could seriously explore outer space.