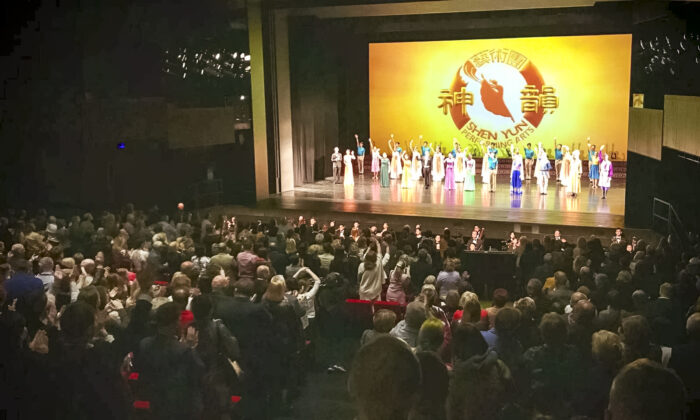 LUBLIN, Poland—Gynecologist Hanna Caban was delighted to obtain a ticket to see Shen Yun Performing Arts in The Opera Hall at The Centre for the Meeting of Cultures on opening night, May 17.

“I was completely shocked that a month before the performance there were only single good seats available,” said Dr. Caban, referring to the full house on the night that she saw Shen Yun.

“It was fantastic that it was so lightly performed. Everything was at the highest quality, yet it seems so light as if it is performed without any effort at all,” she said.

Dr. Caban was delighted that Shen Yun had come to her city to perform and marveled at the unique integrated digital backdrop.

The spiritual aspect shown in the last dance story stood out for Dr. Caban.

Being human and happy does not rely on material things, she said.

“The most important aspect of our lives is spirituality,” Dr. Caban said.

“I think that’s worth remembering—that you can have all things, but not get [to Heaven],” she said. “That’s not how we become happy—this overabundance of things basically does not help us.”

Many of the Shen Yun artists practice Falun Dafa, a spiritual discipline that teaches the three principles of truthfulness, compassion, and tolerance. As explained in the program book, these artists are on a shared spiritual journey and take seriously their self-refinement and morality, which lends to the pureness of their art.

Financier Zbigniew Rybakiewicz was also in the audience and he described his Shen Yun experience as “wonderful”.

“It was full of bliss and peace,” Mr. Rybakiewicz said.

The combination of the colors on stage and the orchestra music created an atmosphere of balance and harmony, he said.

“What catches the eye are the patterns with the combination of large single-color surfaces, the lightness of costumes, and the calmness, and harmony in the music. This puts you in a magical atmosphere,” Mr. Rybakiewicz said.

He was also amazed at how much he learned about China’s history.

“It’s astonishing how one can learn history through art. I was talking with my daughter during the intermission, about how this is the most interesting history lesson you can get, and even more,” he said.

“It happens almost unconsciously, subconsciously, and yet it combines facts with the beauty of art.”

Czeslaw Rolla came to see the Shen Yun performance from nearby Pulawy.

Mr. Rolla did not expect that Shen Yun performance would give him “so much food for thought. I don’t know if I will sleep tonight, because I’ll be thinking about the things I saw today.“

Shen Yun Performing Arts is dedicated to presenting “China before communism” to audiences around the world. The communist regime in China has been systematically working to destroy traditional culture since it took power in 1949.

“Artistically, the whole performance is very beautiful. I was very moved by the performance, which refers to what is happening now in China. This performance very clearly shows their problems,” Mr. Rolla said.

Shen Yun company’s mission is to revive traditional Chinese culture and share it with the world through the universal languages of music and dance.