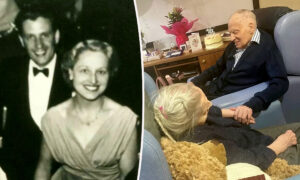 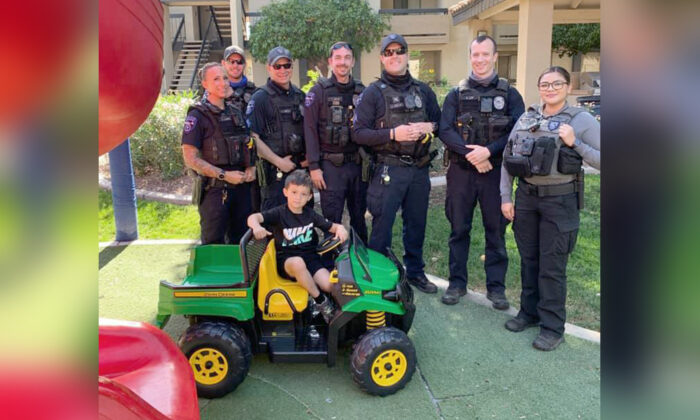 Arizona police officers surprised a 4-year-old boy after his battery-powered Gator tractor was stolen. The officers secured enough money to replace the boy’s stolen toy with a brand-new set of wheels and gifted it to him.

On April 8, dad Peter Philbrook shared his heartbreak on a Facebook group after his little boy Gerald had his tractor stolen from outside their Tempe apartment complex.

The tractor had been a fixer-upper for the father and son, who originally found the Gator propped up beside a garbage can.

“It was really sad seeing him so hurt,” Steffanie Philbrook, Gerald’s mother, told Fox 10. “He would draw pictures and tell stories of when he had his Gator and why was it gone.”

“Peter stated in the post that the Gator isn’t worth much in dollars, but it was a project that he and his 4-year-old son Gerald had bonded over,” Tempe Police shared on Facebook.

Philbrook claimed he would sell whatever he could in order to come up with the reward money for someone who found it. The post caught the attention of Patrol Sergeant Andrew Brooks’s wife, who implored her husband to intervene.

After attempting, and failing, to locate the stolen Gator, Brooks teamed up with the department’s L and N squads. Working with a local Walmart and the Tempe Officers Association, they managed to secure enough to buy Gerald a new Gator.

On April 24, officers gathered outside the Philbrooks’ apartment to present Gerald with his gift. Footage shows the 4-year-old tentatively approaching his brand-new Gator in disbelief, before exclaiming, “It’s cooler than the other one!”

His mother claimed Gerald thought he was leaving the house to meet some friends at the park but was surprised to see a group of officers outside his house.

Officers, the department wrote on Twitter, “answered a family’s prayers” that morning.

Gerald took his new wheels for a test drive and posed for photos, smiling with his thumbs up beside the officers who made his day a memorable one. For Brooks, just seeing Gerald smile was a reward for his efforts.

“We deal with so many negative things in the world,” the patrol sergeant reflected, speaking to Fox 10. “Just to be able to bring some joy is awesome. It’s a good feeling.”

Share your stories with us at emg.inspired@epochtimes.com, and continue to get your daily dose of inspiration by signing up for the Epoch Inspired Newsletter at TheEpochTimes.com/newsletterer