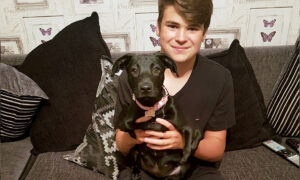 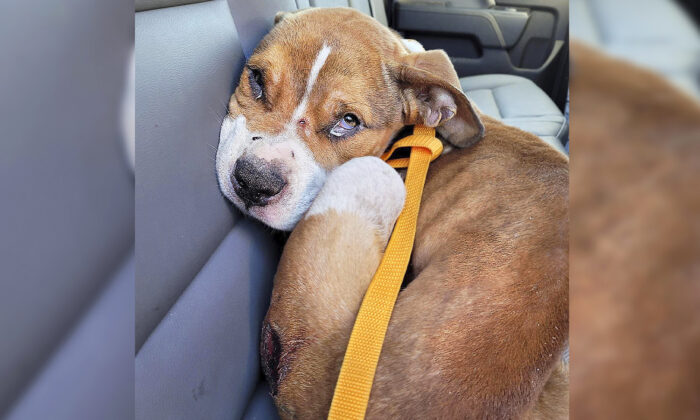 When a 6-month-old puppy was found in a home in New York state, starving, dehydrated, and barely able to walk due to maltreatment and neglect, a local animal welfare group was determined to deliver him from the horrific abuse he was enduring.

Now, the puppy, named Hemi, is well on the way to recovery. The police officer who rescued the dog has decided to adopt him, and thankfully, he will be spending Christmas in a loving home.

An anonymous caller had reported the abuse situation to the Niagara County SPCA in late November. They described two animals that appeared to be in rough shape, Hemi and another dog, out in a backyard. The officer arrived on the scene to find the puppies in atrocious conditions.

Hemi’s hind leg was so bruised and swollen, he couldn’t walk; an officer had to carry him to the rescue vehicle.

The other dog, Foreign, was in a slightly better state of health but couldn’t put pressure on its hind leg.

After removing the dogs from the scene, both animals were rushed to Northtowns Emergency and later brought to the care of the SPCA, where they received tender treatment and had a chance to rehabilitate.

“It’s heartbreaking to think that Hemi is just a baby and this terrible treatment is all he knows, but we assure you that his life will be better from here on out,” the Niagara County SPCA said in a press release.

Apparently, the officer who rescued Hemi bonded with the pup. After Hemi was medically cleared, on Dec. 9, Hemi was officially adopted. He is doing really well judging by the group’s latest update.

On Dec. 10, the SPCA shared this photo along with a comforting caption on their Facebook page, letting everyone who’s been concerned about him know he’s in good hands for the Holidays and for the rest of his days. “Merry Christmas Hemi

We wish that all our readers will be so lucky as to celebrate their Christmases as cozily as this puppy surely will!