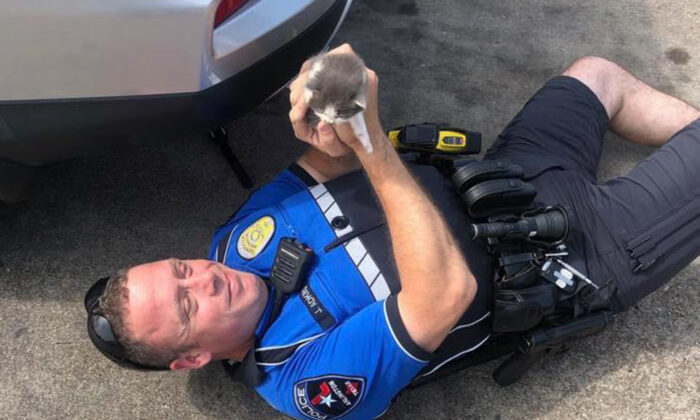 What started out as a police call for a shoplifter at an Arlington, Texas, TJ Maxx shopping outlet ended with an officer rescuing two stray kittens. The icing on the cake followed later with a very special adoption.

Arlington Police Department officers Adkins and Hilliard were on their way out of the TJ Maxx parking lot when the store manager revealed a secondary need for the officers’ assistance. There were two tiny kittens stuck beneath a customer’s vehicle in the lot, they said.

On May 2, 2019, the department posted their version of the unusual event on Facebook. “Who says firefighters are the only ones who rescue kittens? (Yes … we didn’t need a ladder on this call …),” they began.

“They located the kittens inside the bumper, where most likely the mother cat had placed them for some reason,” Jesse Minton of the department told The Dodo. “The owner of the car advised she did not own a cat and had no idea how the kittens got in there.”

Officer Joe Bob Adkins crawled under the car and retrieved two tiny bundles of fur. Photos posted to social media depict the besotted officer and the two equally besotted kittens snuggling up in the front seat of the squad car, the kittens nestling into Officer Adkins’s shirt for comfort.

After making the most of the adorable photo opportunity, the two officers rushed the kittens to the nearest veterinary clinic. The siblings were declared to be in good health.

Being only around 6 weeks of age, the growing kittens were ravenously hungry for food. Officers Adkins and Hilliard were invited to bottle-feed the kittens with kitten formula themselves.

“Both kittens [were] rescued,” the department later confirmed on Facebook, “and will be going to a great home!‬” The department did not say to whose home the kittens would be going, but it soon transpired that all those cuddles had had a lasting impact on Officer Adkins.

‪Who says Firefighters are the only ones who rescue kittens? 🚒‬ (Yes…. we didn’t need a ladder on this…

The big-hearted officer, after being the one to lift the kittens to safety from their dangerous hiding place under a car in a TJ Maxx parking lot, had fallen in love. Adkins officially adopted the kittens.

Animal lovers were quick to post grateful messages on the APD’s Facebook page. “You two officers are so great! APD has the best there are,” wrote one self-proclaimed “Top Fan.”

“That little kitty looks really comfortable on your shoulder,” they continued. “Thanks so much for saving them. God bless.”

“Awwww it’s nice to see the softer side of police officers every now and then,” added another supporter.

“Here’s two of the good guys: Officers Adkins and Hilliard,” praised another fan of the officers’ work. “Thanks, gentlemen. (That is a direct quote from the kittens. They’re very grateful.)”

Notably, adopting the kitten siblings was not Officer Adkins’s first philanthropic act of 2019. Just three months before meeting TJ and Max, Adkins was awarded the South District Officer of the Year Award for outstanding service, according to Animal Channel.

Proving that there’s a warm and fuzzy side to law enforcement, two tiny kittens are now safe and loved in their forever home because two Arlington police officers took the time to go above and beyond the call of duty.