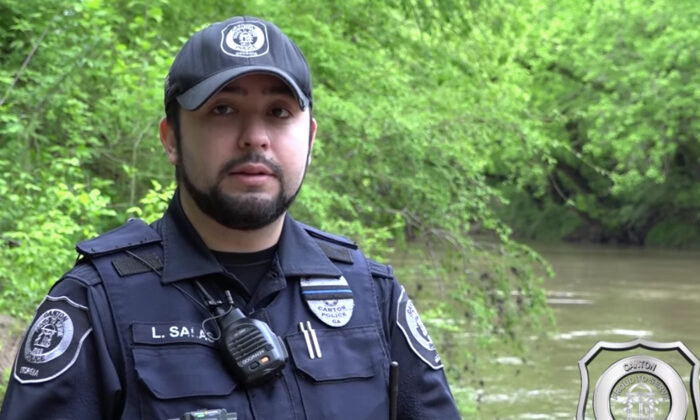 A quick-thinking police officer is earning praise for his heroic efforts after saving two terrified teens from drowning in a freezing river.

In the early evening of April 21, 2020, Officer Luis Salas responded to a call from Etowah River Park in Canton, Georgia, according to Fox 5 Atlanta. Two teens had fallen into the river and were in distress amid fast-running currents.

After arriving on the scene, Salas quickly stripped off his belt and vest and dove into the water in a bid to rescue them.

“I immediately get in the water,” Salas regaled in interview footage shared by the Canton Police Department (CPD) on Facebook. “I swim my way down … until I finally catch up to them.”

Having previously served with the U.S. Marine Corps., Salas amassed numerous swimming qualifications before moving on to law enforcement. “It’s always been in cold water,” he said, speaking of his swimming experience. “Always! It’s never been warm.”

The officer reached the teens, who were clinging onto a tree branch to save themselves from floating farther down the river. Salas described the pair as “scared” and “panicking.”

“I tell them calmly, you know, ‘Hey, I’m Officer Salas,’” the officer explained. “‘I’m here to help you. I need y’all just to trust me with your lives. Please just trust me and calm down, we can get out of this, all three of us alive and go home.’”

The female teen told Salas that she was a weak swimmer. “I told her to calm down, hold on to me, and I’ll get us all to safety,” Salas recalled.

Additional officers arrived on the scene and assisted Salas by throwing a buoy and a throwbag containing 90 feet of rope into the river. Salas and his colleagues were then able to retrieve the teens—the girl first, then the boy—and lift them safely onto the riverbank.

The buoy briefly became snagged on a branch during the girl’s rescue, but Salas was able to snap the branch and continue on his way toward the riverbank.

When asked whether the water was cold, Salas replied with a laugh. “It was freezing,” he said.

A fire rescue team was staged on the bank to receive the teens, both of whom were given warm blankets to help prevent hypothermia. The female was escorted to nearby Cherokee Hospital and released shortly thereafter, having sustained no serious injuries.

Officer Salas completed his Field Officer Training program for the CPD on Nov. 8, 2017. Almost two years later, the officer’s colleagues lauded him on the occasion of his second year with the department on Aug. 9, 2019.

“Thank you for all you do for our department and community we engage with daily,” the department posted on Facebook, adding, “Your mindset, attitude, and heart truly make a difference in our profession and with the citizens we serve.”

A spokesperson from the CPD made sure to thank Salas, and his team, for their “heroic efforts” during the April 21, 2020, river rescue in a video posted to Facebook. Numerous members of the public seconded the police department’s sentiments in hailing their dedicated officer a hero.

“Thank you Officer Salas,” one netizen wrote. “I know you’re probably thinking, ‘I was just doing my job,’ but thank you for being quick to take action and keeping the victims calm. We appreciate you very much.”

“Tuesday you made headlines, saved lives and made a difference, thank you,” wrote another.

“But on the days you and your fellow officers are challenged,” they added, “remember you change lives, save lives, and make a difference every time you slip on your vest and put [on] the badge, sometimes just with a look and a smile.”