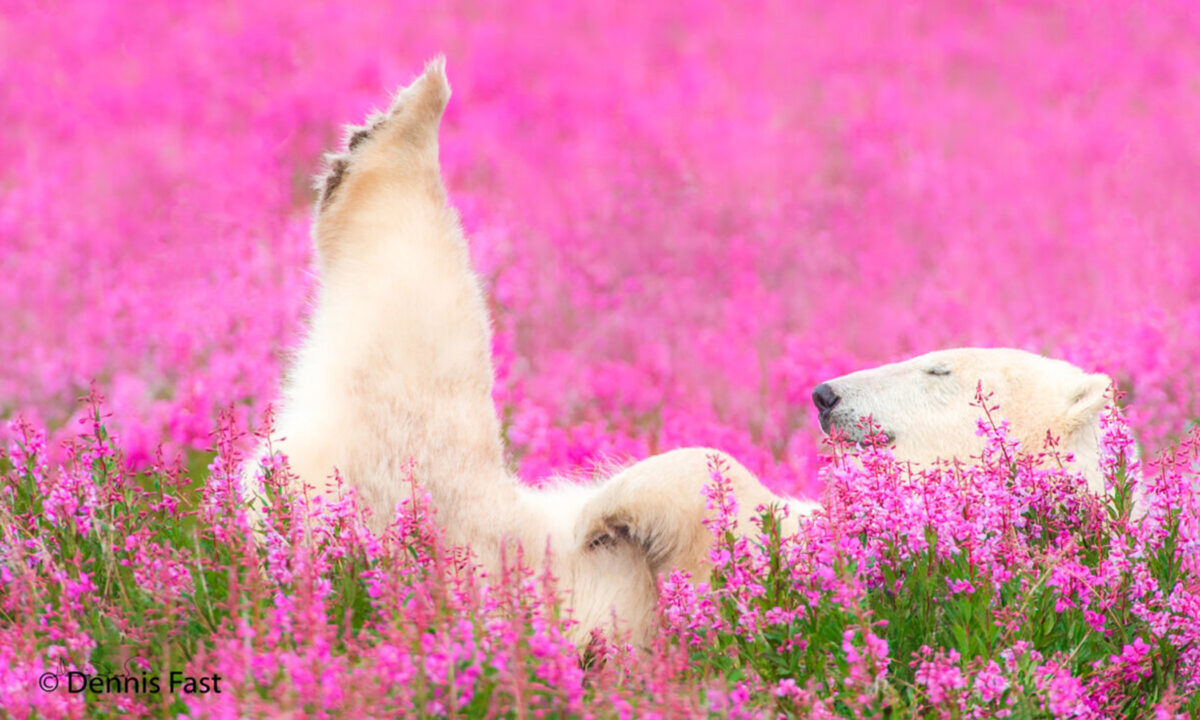 These rare photos are like scenes from some polar bears’ exclusive summer vacation.

Photographer Dennis Fast’s images of bears lounging in fields of wildflowers are both incredible and startling. We are so used to seeing polar bears surrounded by snow, we forget that they, too, enjoy a season of warm weather.

Fast, 79, captured the breathtaking shots on an island he dubs Fireweed Island, just off the coast of Hudson Bay north of Churchill, Manitoba, Canada—the town nicknamed the polar bear capital of the world.

In the early 2000s, a friend switched Fast onto the area covered in lush pink fireweed where polar bears could be seen frolicking around and relaxing.

“He had been in a small plane flying over the area and got some snapshots of a number of bears loafing among the flowers,” Fast told The Epoch Times. “We soon discovered that this was an annual event and my determination to get there began.”

Every year, after coming off the Hudson Bay ice, where they have spent the winter hunting seals, polar bears spend their summers loafing on land. Summer is typically short, but it certainly is sweet. While waiting for ice to reform so they can begin winter hunting again, they mostly spend their time relaxing, swimming, and looking for shade or hunting fish along the Hudson Bay coast.

Fast was on a camping trip to the island in 2006 when he first managed to photograph the bears. The stunning pictures he managed to take on these trips show the magnificent creatures at their most playful.

The resulting encounters and images were simply magical. Of course, spending time near polar bears is not without risk. He asserted that, when dealing with potentially dangerous animals, a long lens is a must, but that the greater concern was at night. “The main difficulty is in assuring a safe enclosure for the times the bears come prowling while you sleep,” he said.

Fast and his companions camped inside a 6-foot fence, but the temporary enclosure only allowed for the posts to be sunk a few inches deep.

“Any self-respecting polar bear could push that down in minutes,” he said, adding that a little further out, therefore, a five-strand electric fence was erected.

“The shock of touching it with their noses meant they were very reluctant to move any closer.”

Describing them as highly intelligent, Fast found that once their curiosity had been satisfied, the bears paid him little attention.

“When they realize that you are no threat to them, they tend to relax. In the world of wildlife photography, the best images come about when wildlife accepts you and does not see you as a target,” he said. “Once I saw the bears close up relaxing among the flowers on Fireweed Island, I knew I was in a special place to see polar bears at their most relaxed moments.”

Fast, a former teacher from Manitoba, calls the bears lolling in the flower fields one of the most exciting adventures he’s had. Only a handful of photographers have succeeded in capturing such dramatic images of bears among flowers, Fast said, and the shots helped catapult his profile.

In addition to numerous interviews for radio and television, Fast has done three books about polar bears, as well as many talks and workshops across Canada. For him, he said, each moment with wildlife is about the “personal inspiration and joy” that it brings him, and not about monetary value.

Fast grew up on a family farm with a market garden near Kleefeld, Manitoba. His father, a lifetime farmer, was an avid photographer himself, and held great appreciation for nature.

“An exhibition of some of his photos from the early 20th century (long before I came along) is opening soon in Winnipeg,” Fast said of his father. “He was an avid reader and having the National Geographic in our home provided me with a lot of motivation.”

Like his father, Fast has a huge regard for his photography subjects. Especially the apex predator polar bear, which he says we should treat with awe-filled respect.

“Polar bears are truly iconic animals,” he said. “Their enigmatic and benign appearance belies the powerful and unpredictable animal that lies underneath the veneer. Their deliberate approach suggests the kingly nature of their hierarchy in the animal kingdom.”

Fast’s summer encounters filled him with childlike wonder, and for that he’ll remain ever grateful to the Churchill polar bears.

Check out more of these photos below: