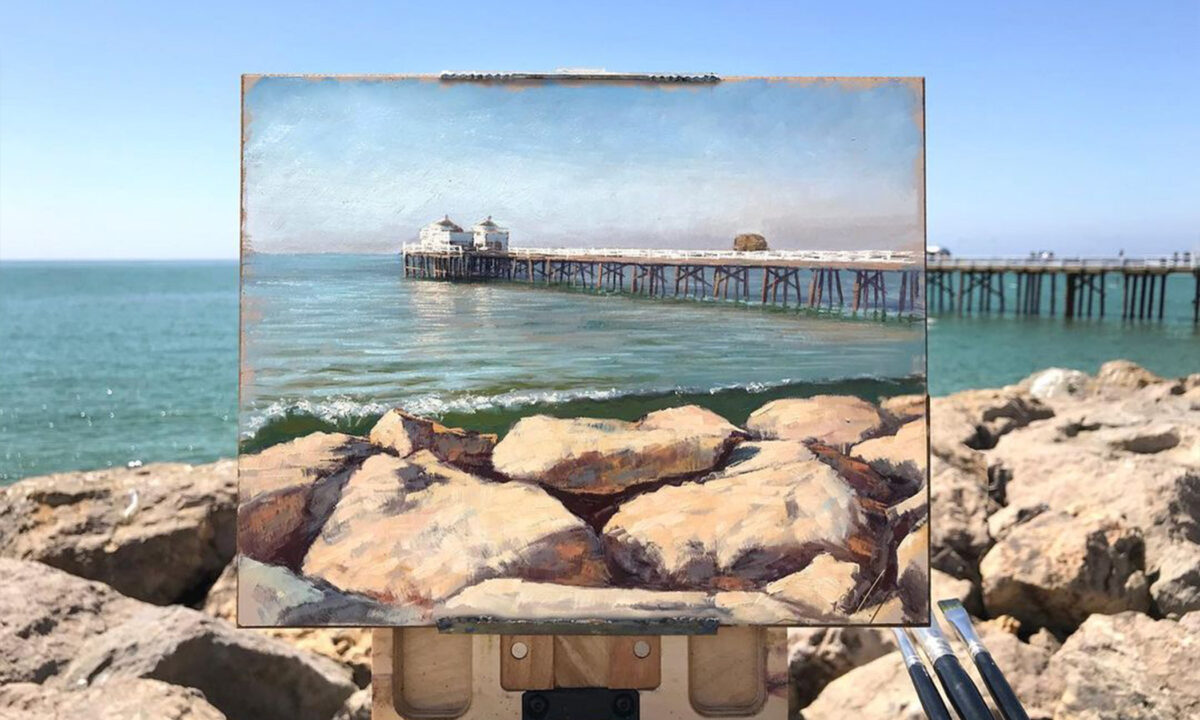 SoCal plein-air painter Richard J. Oliver knows the more the artist can say with a single brush stroke, the more rewarding. He channels the savvy artist’s maxim: “less is more.”

It’s the polar opposite of how he once painted—in the studio he’s maintained for the past 30 years. “I often explain it metaphorically as a process of making paintings like Haiku poems rather than lengthy, descriptive essays,” Oliver told The Epoch Times. Based in Los Angeles, he joined the 19th-century tradition of plein-air (French for painting “out of doors”) for a change of pace after pursuing the old masters for two decades.

The style stemmed from the advent of oil colors that came ready in the tube, making it more practicable for the artist to carry them, set up easels, and paint abreast sun dappled gardens, cafés, and open landscapes.

Lines of famous oil painters sprang from this new and novel genre, including John Singer Sargent, the realists, and Cezanne with the Impressionists. “I was very much taken by the art of Manet and the realists and learning to paint became my passion,” Oliver shared.

Here are some of Oliver’s works:

Traveling to places such as Provence, France, the eastern Sierras, and the California coast became the most rewarding artistic sabbatical for Oliver, hailing from Wales, UK, originally.

He keeps his gear light for his excursions—toting painting materials adds up!—but nevertheless loves backpacking to remote and enchanting places located off the beaten trail. “The light in Provence is so warm and the buildings and vineyards give endless inspiration,” he said. “I’ve visited and painted the mountain range of the Sierras a number of times and it always calls me back.”

Of his ultimate aim, he shared, “I’m trying to express the primary feeling that the particular scene or motive invoked in me. I wish my work to be less descriptive and more suggestive, using shape, texture, value, hue, saturation, masses, and variety as my main tools.”

In line with today’s trend, Oliver’s pictures do go viral on Instagram. On location, he sets up realistic, still wet plein-air canvases so they magically blend into their surroundings. Snapping and posting these, he leaves Instagrammers wowed on social media.

For 20 years, he followed a more traditional path: studio painting ala the Renaissance masters; until a life-threatening condition got him outside, trying plein-air for a first. It became a profession.

Actually, pre 19th-century artists also did this; John Constable ventured outdoors, Turner following, for loose oil sketches direct from nature, contrasting laborious studio practices of painting in layers, waiting for each to dry before going overtop, taking weeks, months, or years. These direct sketches were used for reference in studio, to be scaled up and made into larger “finished” works.

“While outdoors there is an emphasis on recording and reacting to the scene and capturing as much information as quickly as possible as it changes around me,” he shared, “I try to record colors and light so that it will guide my studio paintings where I have more time to contemplate and infuse style in the controlled studio environment.”

Conjuring Constable, he explained, “I approach my plein-air painting more as a study field note. I usually use a warm neutral value ground and build a rough value sketch before adding color. I take a split temperature primary color palette with me, which I have developed over the years and suits all the environments I go to while keeping the paintings harmonious.”

He dreams of one day having a Richard J. Oliver Gallery; but, for now, art fairs do just fine, letting Oliver share his passion with the world outside.